This Sunday is “National Back to Church Sunday,” but according to a new study by Pew Research, not many have left in the last 10 years.

According to Pew, the number of Americans who attend religious services regularly has remained relatively steady with 37 percent saying they attend weekly or more. A decade ago 39 percent said the same.
Those who attend services monthly or yearly has also only fluctuated between 32 and 34 percent, settling at 33 percent this year. Americans who seldom or never attend has risen slightly, but steadily, from 25 to 29 percent.

More than two million people from 20,000 churches across the country participated in this year’s effort to reach the unchurched. According to those promoting “National Back to Church Sunday,” churches that participated last year saw an estimated 38 percent increase in attendance.

A previous study from Lifeway Research found most North Americans would be open to outreach from churches. A personal invitation from a family member would effectively reach 67 percent. Sixty-three percent would be open to having a friend or neighbor invite them to church.

“Many of your unchurched friends are ready for an invitation to conversation,” said Ed Stetzer president of Lifeway Research. “Unbelievers next door still need a simple, personal invitation to talk, to be in community and to church. Clearly, relationships are important and work together with marketing.”
Despite the openness of the vast majority of people, many Christians still never vocalize their faith to others.

In a survey of American Protestant churchgoers, 61 percent had not shared how to become a Christian with anyone over the last six months. Over the same time period, 48 percent said they had never invited anyone to attend a church service or program.

“Many times we’ve been told new Christians are most active in sharing their faith,” said Stetzer.

“In reality, people who have been a Christian longer have higher responses for sharing Christ than newer Christians,” he continued. “While new Christians may find it natural to share their new experience, mature Christians do it intentionally.” 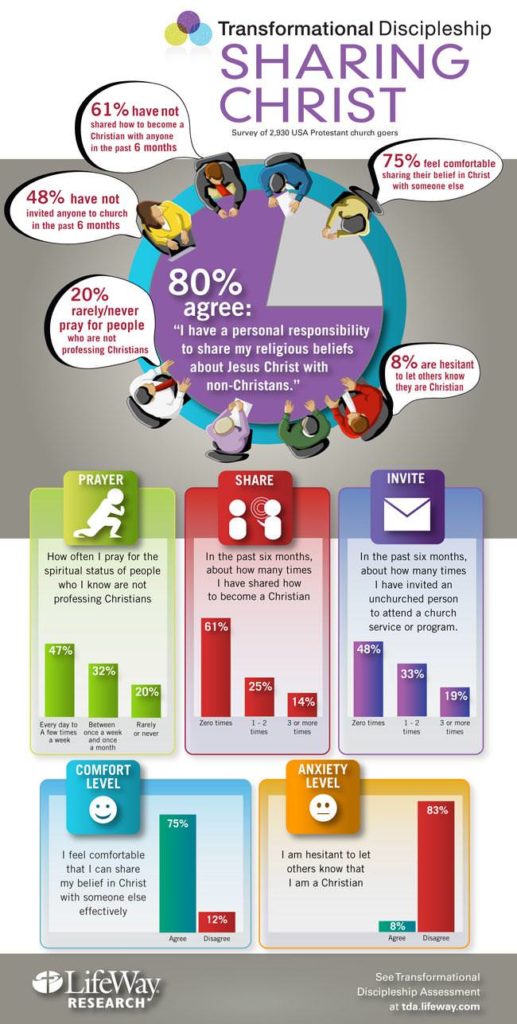