Whether launching grassroots initiatives or responding to top-down projects, Christians in North America are increasingly involved in justice related issues such as poverty, human trafficking, refugees, orphans and health care.
Sharon Mall of Janesville, Wis., serves as catalyst for the Evangelical Free Church of America’s Reach Global Asia Justice Initiatives. She says a Christian “cannot demonstrate Christ without doing social justice. When we genuinely care about people, then we’ll also share Christ with them.”

She’s found that in areas of vulnerability—whether in North America or in Asia—when believers develop a platform through mercy ministries, doors open for them to present the gospel. People who don’t believe in prayer respond with remarkable positivity when someone shows compassion and offers to pray for their needs.

Jane Forster, a member of Rockpoint Evangelical Free Church in Lake Elmo, Minn., says sharing the gospel is crucial because “that’s where the hope is,” but that demonstrating the gospel is also important. She and her husband, Steve, are involved with the Brydges Centre, a three-branch institution that provides shelter, food and education to orphaned, homeless and impoverished children throughout Kenya. “People don’t care how much you know until they know how much you care,” says Forster. “We have to love them into the Kingdom, and we do that by first meeting their physical and social needs. We have to show people we love them because that’s what Jesus would call us to do.”

Lifeway Research conducted a series of surveys among Protestant (both evangelical and mainline) pastors, from 2008 to 2012, specifically on the topic of poverty but also about social action in general. This research revealed that larger churches tend to be more actively involved with social justice issues. As average weekly church attendance rises, so does the likelihood of a church addressing poverty at the local level, speaking about poverty, being interested in social action, or mobilizing its members “to directly engage and care for the poor” in its community.

But across the board, the majority (95 percent) of respondents agreed that “care for the poor is mandated by the gospel.”

“When pastors believe this, their churches tend to care more about social justice issues,” says Ed Stetzer, president of Lifeway Research. “We’ve seen an increase in the percent of churches engaged in care for the poor since 2009 from 76 percent to 90 percent in 2012.”

Among all respondents, 25 percent listed poverty as the most important of five issues “facing our country today.” The other four choices were abortion (24 percent), same-sex marriage (20 percent), healthcare (19 percent) and the environment (3 percent). Nine percent responded with “None/Not sure.”
Churches in large cities (63 percent) are somewhat more likely to address poverty at a local level than churches in rural areas (53 percent). The survey results indicate differences between mainline and evangelical churches, between Democratic and Republican pastors, and between pastors with a college degree and those without. In each case, the former was more interested in or involved with social action than the latter.

“Our research shows the level of engagement churches have in caring for the poor may be influenced by how often pastors speak to their congregations about poverty,” says Stetzer. More than a third of Protestant pastors speak on poverty several times a year or more.

“But Protestant pastors are not only talking about caring for others, they are leading their churches to take action,” says Stetzer.

Bringing Hope to the Marginalized

When the Brydges Centre was founded in 1995 by Rosemary Eve Wafula, a Kenyan, its initial goal was to provide spiritual guidance and meals. As support and the number of volunteers increased, the Centre began to help children in more substantial ways. Currently, the Centre provides for 150 children and supports 40 youths every year through skills development programs. The Forsters heard that the Centre needed a partnership and, in February 2012, travelled to Nairobi with another couple from Rockpoint to explore how their church could help. “We came back with a piece of our hearts left over there,” says Jane. “When people caught the impact it had on us, they asked, ‘What can we do?’” In one weekend, they raised $26,000 to build a windmill for the Centre. Forster says they’d like to eventually build a training center for pastors “and maybe have a church on site to have the project come full circle to what the goal really is there.”

Homelessness may not be as severe in North America as it is in many impoverished nations around the world and yet it remains a reality in many urban centers.

Every Monday evening at Uptown Baptist Church in Chicago a few hundred homeless men and women fill the church basement where they receive a hot meal. The church has been caring for the city’s homeless for years.

“The deepest need of humankind is to know God and to reconnect with God,” says pastor Michael Allen. “Whatever surface problem is going on around us, the opportunities are there to be a light, to be a witness and share the good news of the gospel in word and deed.”

A Bad Day for the Wicked

Some Christians may shy away from social justice issues because they perceive them to be in the political realm instead of the spiritual, suggests Debbie Johnson, founder and CEO of Without Permission in Modesto, Calif., a ministry that serves the victims of human trafficking after they are rescued by local law enforcement. “But when we talk about human trafficking, we’re really talking about the sexual demonic stronghold. This has been a third world issue for decades. God is waking up the church to say, ‘This is in your country at epidemic levels.’” Johnson refers to Proverbs 21:15 and says, “When justice is done, a city rejoices. It’s a bad day for the wicked!”

Without Permission makes sure its work focuses on one of the three things Johnson says are needed to eradicate human trafficking: prosecution, protection and prevention. The ministry does not attempt to rescue girls caught in sex trafficking. 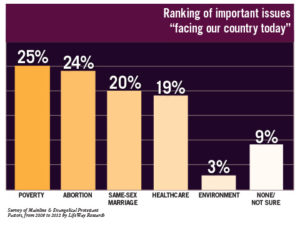 “We serve the first responders who rescue them,” Johnson explains. Without Permission trains and equips “navigators” to sit with girls rescued by law enforcement. The girls are given a “Bag of Compassion” containing a stuffed animal and blanket, along with personal items.

“We talk to them. We tell them we’re there to help them. We pray with them.”
Sometimes Without Permission will house girls, pay for their travel back home and speak with their parents. By supporting these girls, Without Permission frees up law enforcement to find and prosecute pimps. “Anyone can do this,” adds Johnson, “even without an organization.”

Stetzer says the research is encouraging. “The numbers show that more and more churches are catching a vision for caring for the forgotten, disenfranchised and oppressed. Jesus has called us to care about justice, and increasingly church leaders see kingdom work as not only gospel proclamation, but also gospel demonstration.”

Ann-Margret Hovsepian is a writer living in Montreal, Quebec.