It all started with an epiphany. One day, I was staring at my largely unused library of more than 1,000 books when I was struck by the sense that it represented for me an embarrassment of riches.

It dawned on me that I had not read at least half of them, and I likely wouldn’t re-read the half I had read.

Over time, I perceived the Lord was preparing me to trim down my possessions to live more lightly, starting with perhaps my most prized ones of all: my carefully curated collection of books, many of them signed first editions.

In a couple of years, I got rid of all but my favorite 50 or so volumes, giving the others to friends and family or donating them to local charities.

In the intervening months, other events transpired to motivate my wife and me to continue cutting the clutter from our home, not the least of which was a neighbor’s large oak tree falling onto our house.

That event literally shook our sense of security and caused us to rethink the place of stuff in our lives.

We felt as if something had broken inside us, releasing us to explore other modes of living, namely a more mobile and simple lifestyle.

Once we embraced the thought of moving, the idea of a less stationary lifestyle compelled us to get rid of the unnecessary possessions weighing us down, literally and figuratively.

We started to minimize our stuff in order to maximize our life. Our motto became “minimize to mobilize.”

The end result was we sold our house and furniture, keeping only our very favorite items, allowing us to move and minister more freely.

One of the biggest breakthroughs was how much my wife and I agreed about what downscaling would look like for us.

Several times it was my wife who suggested getting rid of stuff rather than holding onto it for its sentimentality.

It also helped that we executed our plan gradually and stored select items with our families for future consideration. The entire process was relatively painless, and there’s nothing that either of us misses or regrets.

What can we learn from minimalism?

During the time of our transition, I began reading online about a growing trend called minimalism, the practice of living with less stuff. I came across a phenomenon called the 100 Thing Challenge.

Started by Dave Bruno, a Christian entrepreneur, it was his private quest to live with only 100 possessions for one year.

But Bruno’s personal challenge quickly grew into a grassroots movement via his blog at GuynamedDave.com, which led to his book The 100 Thing Challenge: How I Got Rid of Almost Everything, Remade My Life, and Regained My Soul.

Spawned during a recession, the challenge tapped into a desire on the behalf of many—believers and nonbelievers alike—to learn to live with less.
As Bruno wrote:

Of course, our ultimate example of keeping stuff in its proper place is none other than Jesus Christ, who taught us how to treat temporal things in Matthew 6:31-33:

In other words, God means for us to possess things in moderation rather than them possessing us as our masters.

And the apostle Paul echoes Jesus’ teaching in 1 Timothy 6:6-8:

“But godliness with contentment is a great gain. For we brought nothing into the world, and we can take nothing out. But if we have food and clothing, we will be content with these.”

A simple rule of thumb my wife and I adopted is to spend on doing, rather than having.

We feel strongly that the best investment of our time and money is to expend them toward creating memorable experiences, ones we will cherish long after the thrill of a newfound trinket fades out of memory.

Can we leave it all behind to follow Jesus?

Quaker minister and author Philip Gulley wrote in For Everything a Season: Simple Musings on Living Well:

“I wonder if our willingness to cast things away is a measure of our spiritual well-being. Consider this: the first thing the followers of Jesus did was leave their stuff behind. Jesus said to Peter and Andrew, ‘Follow me,’ and immediately they left their nets and followed him.

And the same is true of James and John. They left their boat and their father to follow Jesus. He also asked the rich young ruler to leave his stuff behind, which the young man couldn’t bring himself to do. He loved his things too much and went away sad. From what I can tell, it’s the only time anyone ever went away from Jesus sad. I try to remember that whenever I think things will make me happy.”

Over the course of our journey, we identified some principles that helped us minimize our stuff and maximize our lives.

First, choose quality over quantity by selecting the best and scuttling the rest.

Second, challenge your assumptions by imagining a different space and structuring it accordingly.

Third, leave no stone unturned by thoroughly going through things regardless of their sentimental value and getting rid of the superfluous.

It was the grace of God that helped us rethink our relationship with stuff and live more lightly.

Wherever you are on your journey of life consider lightening your load by getting rid of stuff that weighs you down and choosing to curb your materialism.

When all is said and done, here is the question to ask: Is your stuff holding you hostage from the life God’s called you to lead?

Sean is a writer living with his wife, Linda, in Franklin, Tenn. Visit him at SeanFowlds.com.

Illustration by Gary Locke (@garyartgood), who is a nationally recognized illustrator, working with magazines like Time, Weekly Standard, Sports Illustrated and Focus on the Family. God Owns It All Bible Study 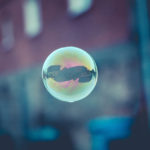 Being a Pastor’s Wife: The Role of Transparency