Lyles, a clinical psychiatrist, has a practice in Atlanta, where most of his clients are evangelical Christians. But not all them. Some have no faith, including a man who was schizophrenic and beset with hallucinations. This patient was a bit of a hermit, spending most of his time sitting at home watching television.

But after his condition stabilized, his life started returning to normal. He made some new friends, and one of them shared the gospel with him. Coming to faith in Christ didn’t take away his hallucinations or cure his schizophrenia. But it led him to a church, a new group of friends, and a better life.

One day the patient came into Lyle’s office with a question: “Why didn’t you ever tell me about Jesus?” He then shared with Lyle how his church and his new faith in Christ had changed his life.

“I would have never found this if no one had told me about the gospel,” the patient told Lyle.

Lyle says he sat there for a minute and then admitted his guilt. “I was just happy you weren’t psychotic anymore; I forgot you were a person.”
That kind of response isn’t uncommon, according to a new study on mental health and faith, co-sponsored by Lifeway Research and Focus on the Family. The study found that ministering to those with mental illness remains a challenge.

That’s partly because dealing with mental illness, like other chronic conditions, can feel overwhelming. Patients often feel as if their diagnosis defines their life, while counselors and even pastors can forget that people with mental illness still have a spiritual life.

As a result, churches sometimes miss the chance to minister to those with mental illness.

“Because of the way we have ignored mental illness, we are hurting people,” says Ed Stetzer, executive director of Lifeway Research. “We’ve created a stigma.”

The Lifeway Research study was designed to address that stigma and to help churches better assist those affected by mental illness.

They surveyed 1,000 senior Protestant pastors about how their church approaches mental illness. Then they surveyed 355 Americans diagnosed with a serious mental illness—in this case moderate or severe depression, bipolar, or schizophrenia. Among them were 200 church-going Protestants.

A third survey polled 207 family members of people with mental illness. Lifeway Research also conducted in-depth interviews with Lyle and more than a dozen experts on spirituality and mental health.

The study found that pastors and churches want to help those who experience mental illness. But those good intentions don’t always lead to effective ministry.

The silence from the pulpit and churches can leave people feeling ashamed about mental illness, says Jared Pingleton, director of counseling services at Focus on the Family. Those with mental illness can feel left out, as if the church doesn’t care. Or worse, they can feel as if mental illness is sign of spiritual failure.

“We can talk about diabetes and Aunt Mable’s lumbago in church—those are seen as medical conditions,” he says. “But mental illness—that’s somehow seen as a lack of faith.”

Step one is talking about mental illness, so people know help is available. Researchers found two-thirds of pastors (68 percent) say their church maintains a list of local mental health resources for church members. But few families (28 percent) are aware those resources exist, and so don’t take advantage of them.

Most pastors in the survey said they know people who have been diagnosed with mental illness. Nearly 6 in 10 (59 percent) have counseled someone who was later diagnosed.

And pastors themselves aren’t immune from mental illness. About a quarter (23 percent) say they’ve experienced some kind of mental illness, while 12 percent say they’ve received a diagnosis for a mental health condition.

But those pastors are often reluctant to share their struggles, says Chuck Hannaford, a clinical psychologist and president of HeartLife Professional Soul-Care in Germantown, Tennessee.

Hannaford, another of the experts in the Lifeway Research study, counsels pastors as part of his practice. Many, he says, keep their mental illness hidden from their congregation.

“You know it’s a shame we can’t be more open about it,” he told researchers. “What I’m talking about is an openness from the pulpit that people struggle with these issues and there’s not an easy answer.”

Pingleton says pastors and church members alike can find solace in the Scriptures. He points out that many biblical characters suffered from emotional struggles. And some, were they alive today, would likely be diagnosed with mental illness.

“The Bible is filled with people who struggled with suicide, or were majorly depressed or bipolar,” he says. “They are not remembered for those things. They are remembered for their faith.”

Pingleton says ministry to those with mental illness is a delicate balance. Churches have to show care and concern. But church leaders also need to know when to refer someone to a mental health professional or doctor, especially when in cases of serious mental illness.

Pastors, he says, walk a fine line when making a referral. Church members may feel rejected if their pastor passes them off to someone else. But the pastor may not have the right skills to help them.

The important thing to do is stay connected even after a referral, he says.

Christians are supposed to bear one another’s burdens. Those burdens can include mental illness, says Warren Kinghorn, assistant professor of psychiatry and pastoral and moral theology at Duke Divinity School.

People who are depressed might have trouble praying or coming to church, and may lose hope, says Kinghorn, another one of the experts in the Lifeway study. In those moments of despair, a church community can offer reassurance and comfort.

In some ways, they can keep the faith for people who are really struggling.
“What can happen is that others can come alongside you and say, ‘I know you can’t hope right now, but we believe that hope is real and that God is real,’” he says.

One of the complications for Christians with mental illness is that they feel pressure to still grow spiritually.

The experts in the Lifeway study, however, cautioned that stabilizing a person’s mental health should come first. Christians can feel God’s presence and comfort in the midst of their struggles with mental illness. But it’s difficult to thrive spiritually if someone’s mental illness is not stable.

“In schizophrenia, there is such a strong biological component that medications are a must,” says Eric Achtyes, staff psychiatrist at Pine Rest Christian Mental Health Services in Grand Rapids, Michigan. “You really can’t do anything else until somebody is stable with a good medication regime. It’s difficult to do anything else.”

About a third of those with mental illness said medication should be used in moderation.

There were some differences over when it was best to use therapy versus when to give spiritual counsel to those with mental illness. About half of pastors (51 percent) said therapy should be used after sharing spiritual principles.

Stetzer was pleased to see the taboo of using medication to treat mental illness seems to have almost disappeared.

But he worries at times that churches see mental illness solely as a medical problem and forget about the spiritual needs to those who are mentally ill.

“I’m concerned that some Christians say, let the doctors take care of everything,” he says. “We can’t outsource spiritual care.”

Dealing openly with mental illness can lead to better outcomes for those who struggle with depression or other conditions, says Achtyes.

But it also can lead to a healthier church environment for everyone.
“The reality is that we all know people who have had mental illness, depression, anxiety, and other problems. The more we talk about [mental illness] and bring it out of the shadows, the more understanding and compassion we’ll have, and I think the better care people will get,” Achtyes told Lifeway Research.

“And don’t we really want our churches to be places of openness and of healing and a place where we can go with our challenges and our trials?”

Bob is the former senior writer for Lifeway Research. In September 2018, he joined Religion News Service, where he currently serves as a national writer. Lizette Beard (@LizetteBeard) of Lifeway Research contributed to this article. 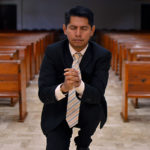