What are you enjoying right now?
We thought we would change up Favorites for the Christmas season. This time of year we all have favorites—favorite movies, favorite recipes, favorite gifts, favorite memories, favorite songs, and more.
Today, the Facts & Trends staff discusses their favorite Christmas presents. But we also want to hear from you. What’s your favorite gift you found under the tree on Christmas morning? Let us know in the comments or tweet us @FactsAndTrends.
Aaron Earls (@WardrobeDoor), online editor: When I think back over “Christmases long, long ago,” a few presents stand out as particularly memorable.
One Christmas, I was excitedly opening all of my gifts and failed to notice what was standing up in the corner of our living room—a new bicycle. Being a big Ghostbusters fan at the time, I wrote “Ecto-1” on the license plate that attached to the handle bars and rode that bike all around my yard.
I also remember when my parents (or Santa) gave me a Super Nintendo. I was glued to the TV the rest of the day. Hopefully, the bike year balanced out my laziness that Christmas.
My wife has given me some extremely thoughtful gifts. One year, she bought a hardcover set of The Chronicles of Narnia. I still love reading those books and have read through the series several times with our sons.
Carol Pipes (@CarolPipes), editor: A couple of memorable gifts given to me when I was a child were a bright, yellow bicycle and a Barbie Dream House. Those two Christmases in particular stand out in my mind.
But my favorite gifts have come to me as an adult. My husband, Keith, is a great gift giver. He takes note of things I say all year round and chooses a gift based on something I’ve mentioned.
I love to cook and bake, so his gifts often reflect this passion of mine. Early in our marriage he bought me a stand mixer. I still love it to this day and use it often.
Matt Erickson (@_Matt_Erickson), managing editor: When I was really young, I got a Pittsburgh Steelers jacket, hat, gloves, and helmet. They were my team and I was thrilled.
I also remember getting a Burton snowboard when I was about 12. That was cool. All the cool kids went snowboarding. Then there was the year my brother and I got a weight set and turned our basement into a home gym complete with blaring music.
In my late teens, I asked for and received a Led Zeppelin boxed set. Awesome. Years later, my sister got me the “Lord of the Rings” boxed set, which was much appreciated. And last but not least, my parents got me a Kindle when they first came out. I put it to good use.
Bob Smietana (@BobSmietana), senior writer: Like most kids, my brothers and I were determined to find Christmas presents ahead of time. My parents went to great lengths to hide them—and we’d search for what seemed like weeks to discover their hidden cache of gifts.
My parents countered by wrapping gifts early, or by finding ever more ingenious hiding spots. Still, we had at least some idea of what would be waiting for us under the tree.
Except for the time in the third grade when I found a guitar with my name on it under the tree on Christmas morning. (My parents had conspired with the neighbors across the street and hid the guitar and other gifts at their house to keep them from our spying eyes.) Over the next year, I took lessons and became a so-so guitar player.
My childhood musical career was cut short when my two brothers got into a wrestling match, stepped on my guitar, and crushed it. But that gift sparked a lifelong love of music. In high school, I picked up the guitar again and have played ever since.
A few days ago, I was sitting in the living room, admiring the Christmas tree, when a familiar guitar riff echoed down the down the hall. It was my son, playing the first few bars of “Smoke on the Water,” the 1970s Deep Purple hit that became a staple for every teenage boy who picks up a guitar.
Katie Shull (@KShull), graphic designer: As a kid, I would say my favorite gift was my Cabbage Patch Kid. This was back in the height of all the Cabbage Patch frenzy. I really didn’t think I would get one because they were in such high demand. I’d pretty much given up hope.
I have no idea how my mom got them, but come Christmas morning both my sister and I got one! My doll’s name was Rebecca, and I think she’s still in the attic somewhere. 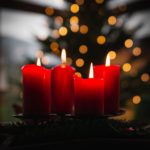