When you look at pop culture, what do you see? Do you see God? For Kevin Harvey, the movies, music, and TV shows of our day often point beyond themselves to biblical truth, even if the artists and actors don’t realize it.

In the upcoming All You Want to Know About the Bible In Pop Culture: Finding Our Creator In Superheroes, Prince Charming, and Other Modern Marvels, Harvey explores all that pop culture has to offer and discovers God in some unexpected places.

Facts & Trends recently caught up with Harvey to ask him about the book and how Christians should interact with pop culture. F&T: What led you to write The Bible in Pop Culture?

Harvey: In all honesty, it was a complete God thing. I just happened to send an email to someone at Thomas Nelson who once hired me as a ghostwriter telling her I’d love another opportunity to write for her again if an opportunity arose.

She wrote back saying they were looking for a writer for a pop culture book that Walmart was interested in selling, and asked if I would be interested in writing a sample chapter if the person they asked first didn’t accept the job. But this time, the book would have my name on it!

I’m not sure what my exact response was, but inside I was screaming, “This is the perfect job for me! I have been prepping for this since my days watching Cheers and Knight Rider as a kid with my family. You want me on this job. You need me on this job.”

If I could’ve chosen any single book to write, it would’ve definitely been this one. That’s just how awesome our God can work.

In several instances, comparisons you made between famous movies and biblical stories helped to remind me of the reality of what actually happened in Scripture. Is that something you’ve found when thinking about movies, that it has given you a fresh perspective on biblical truth?

I do talk about how violent the Old Testament actually is when we think about it, as compared to some of the violence we sometimes complain about in movies today. One story I mention in the book is of Samson killing 1,000 men with a fresh jawbone of a donkey. Indeed, how incredibly gross (and awesome!) that would’ve been to see.

But it did happen, as well as much, much more that we would probably screen our children’s eyes from if we saw it portrayed on the big screen. And that’s not to necessarily defend every biblical hero and the lengths they went to at times, but we shouldn’t hide from it either.

I love that God chose to have the writers of the Bible tell it all—the good, the bad, the ugly. Many writers may have chosen to leave out David’s adultery, in fear of making Israel’s greatest king look bad. The writers of the Gospels could’ve intentionally left out Peter’s denials or Judas’s betrayal. But to do so would’ve painted a false picture of the journeys that God’s men and women followed while here on earth.

In a similar way, the stories and characters in today’s movies shouldn’t be portrayed as perfect and seamless either. I think I can better appreciate now the beautiful messes in which today’s fictional characters tend to find themselves in, because that’s exactly what the lives of many of the Bible’s heroes looked like too.

When you discuss children’s movies, you share a lot of truth we can draw from these films. I agree, but often times Disney and the like teach self-affirmation and self-reliance. What do you do when your kids watch and enjoy movies that have messages that subtly undermine biblical truth?

The biggest thing that grates at me concerning many kids’ movies and TV programs today is how ridiculously stupid the parents are oftentimes portrayed, especially the dads. Or how disrespectful the kids are to their parents.

In these instances, as well as the ones like you mentioned that deal with self-reliance, I think the main thing parents can do is to watch these programs and movies with their kids and then talk to them about some of the negatives either during or immediately afterward.

Personally, I don’t have to parent in fear that Disney is teaching things to my children that could corrupt their souls, because I know they hold my word, which they know aligns with the Bible, on a much higher pedestal.

The only catch is, I have to make sure I am continually communicating that to them. We shouldn’t fear our kids learning false truths; we should fear them learning them away from us. Because they will indeed learn them. The question is, where will you as the parent be?

You highlight several Christian characters from movies and TV shows. Which of those you mentioned is your favorite, and is there one you left off you wish you had room to include?

Hands down my favorite all-time Christian fiction character is Shepherd Book from the short-lived series Firefly. What I think I appreciate most was how the self-proclaimed atheist Joss Whedon, who created the character, portrayed Book in the show.

He was one of the crew, yet he was clearly “holy,” or separate, as God calls Christians to be. Though we are not to be “of the world,” I think Christians too often forget we still are to be “in the world,” as Jesus was, actively being salt and light in a world that so badly needs it. Book was true salt and light amongst Firefly’s derelict crew.

As far as any left off of the list, there’s a new show on FOX called Backstrom that has a detective who is also a preacher on the weekends. Though it’s only been a few shows, the portrayal here is one I definitely like. There’s none of the stereotypical outlandish stuff we often see from Christian characters, like Mary Cooper on The Big Bang Theory. If somehow Backstrom gets a second season, I think Christians should pay attention to this show and the Christian character on it.

You were able to draw biblical lessons out of reality TV. That should guarantee we can find some truth in just about anything. How can we watch television with an eye for truth?

In the blog I recently started, BibleInPopCulture.com, I included a page called “Put on Your God Goggles.” What I mean by that phrase is to try watching or listening to things with the intention of redeeming it for the kingdom, knowing that at the very least the artists behind it are still creations of God who sometimes unknowingly mimic their Creator.

But in much of reality television today, you might not only have to “put on your God goggles” to redeem something; you may have to constantly spray them with Windex and wipe them off with a microfiber cloth. But trust me, it’s there … somewhere.

One of the things I wrote in the book that has really stuck with me is that the Kardashians don’t own the copyrights to crazy families. That honor goes to the first family ever on earth, lest we forget how the Cain and Abel story ended.

So sometimes to redeem pop culture today for God doesn’t necessarily mean we can take a plot point or a theme and apply it, but maybe we just admit that inside the pages of the Bible we rightfully hold dear to our lives is much worse violence, scandal, sin, and family squabbles than what we see on the screen today.

One of the things you do throughout the book, and particularly in chapter 8, is to point out phrases in pop culture that originated in the Bible. Which one of those do you think is the most surprising?

That was a fun chapter to put together, and I definitely hope readers don’t breeze over it just because it’s not talking about “fun” stuff like movies and television. I think there are quite a few listed, as well as many that I didn’t have room to include, that many (perhaps most?) readers will be surprised on the original meanings behind these familiar phrases.

Phrases like “eye for an eye, tooth for a tooth,” “go the extra mile,” and “reap what you sow” have become extremely common vernacular in today’s culture but are mostly used in completely different ways than their original, biblical uses.

Even people who have never once stepped foot in church or opened a Bible have been quoting Scripture their entire lives and never knew it. So I loved that I was given the chance to include this chapter that hopefully helps to explain the meanings behind these popular phrases.

Obviously, we can’t watch or listen to everything, both from a moral and practical standpoint. So how can Christians be discerning in their entertainment decisions? How do we choose wisely the things that will help us connect with our neighbor and better understand the culture around us, without participating in something that could potentially be harmful to us spiritually?

There is certainly a fine line here that I believe has to be different for everyone, depending on many circumstances. That may sound like a cop-out answer, but it’s truly how I feel.

I am careful never to use certain movies, TV shows, or music as “bad” examples or things to stay away from (although I certainly feel there are some), because I know there are definitely many people who would disagree with the types of things I allow in my house.

If I may speak in generalities, though, in order to share an example, my wife and I made a decision years ago to no longer watch R-rated comedies. For the most part, the redeemable things that may be in some of those are few and far between, and lost amidst a great deal of language and sex.

So in order to find anything redeemable that could lead to connecting a coworker or neighbor to the gospel, we would have to subject our eyes and ears to a surplus of content that is not healthy in any aspect. To me, that doesn’t seem like the best choice to make.

Then there are other shows I have intentionally never seen, like The Walking Dead, that from what I hear could actually help make some gospel connections. However, with two elementary-aged children in my house, some things have to be left off of my DVR’s season pass … for now.

But I do think there is actually more on television than we might initially think that could be redeemed for the gospel if we were to watch it with our “God goggles” on. Plus, these are the shows those around us are watching.

If for no other reason, sometimes we might just need to watch last night’s Agents of S.H.I.E.L.D. or Big Bang Theory so we can be included in conversations with those around us who are part of our mission field. Plus, Sheldon Cooper is hilarious. How can you not love him? 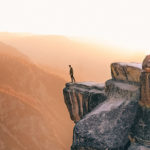