A dispute over who can lead student religious groups has left Americans uneasy, but few want to see groups punished for requiring their leaders to hold specific beliefs or practices.

A new study from Nashville-based Lifeway Research finds mixed opinions about whether student religious groups should be allowed to mandate leaders’ beliefs or, because of their religious beliefs, restrict LGBT members from leadership roles. Yet nearly 7 in 10 say colleges should not withhold funding or meeting space from such organizations.

The issue has emerged in recent years on college campuses from California to Maine. Student groups say their belief statements and ethics define their identity. College officials — citing what are known as “all-comers” rules — insist groups and their leadership be open to all students, no matter what.

Groups at more than two dozen campuses have lost their official standing over this disagreement. One dispute, at the Hastings College of Law in California, went before the U.S. Supreme Court. Lawmakers in several states have proposed laws that would bar colleges from applying “all-comers” rules to on-campus religious groups.

Ed Stetzer, executive director of Lifeway Research, observed, “Recent university restrictions on beliefs and practices of student group leadership are a sharp contrast to admissions offices that celebrate pluralism, residential programs that encourage diversity, and schools that encourage new thinking. Oddly, these ‘all-comers’ policies lead to the idea that even Oscar Mayer should be allowed to lead the Vegetarian Club.”

Lifeway Research asked 1,000 Americans to respond to this statement in a phone survey: “Should student religious organizations, recognized by publicly funded colleges, be allowed to require their leaders to hold specific beliefs?”

Evangelicals (51 percent) are more likely to say groups can require specific beliefs than those with no religious preference (33 percent).

Lifeway Research asked a similar question about student groups at private colleges. A little more than half (51 percent) of Americans say those groups should be allowed to have required beliefs. Forty-four percent say they should not. 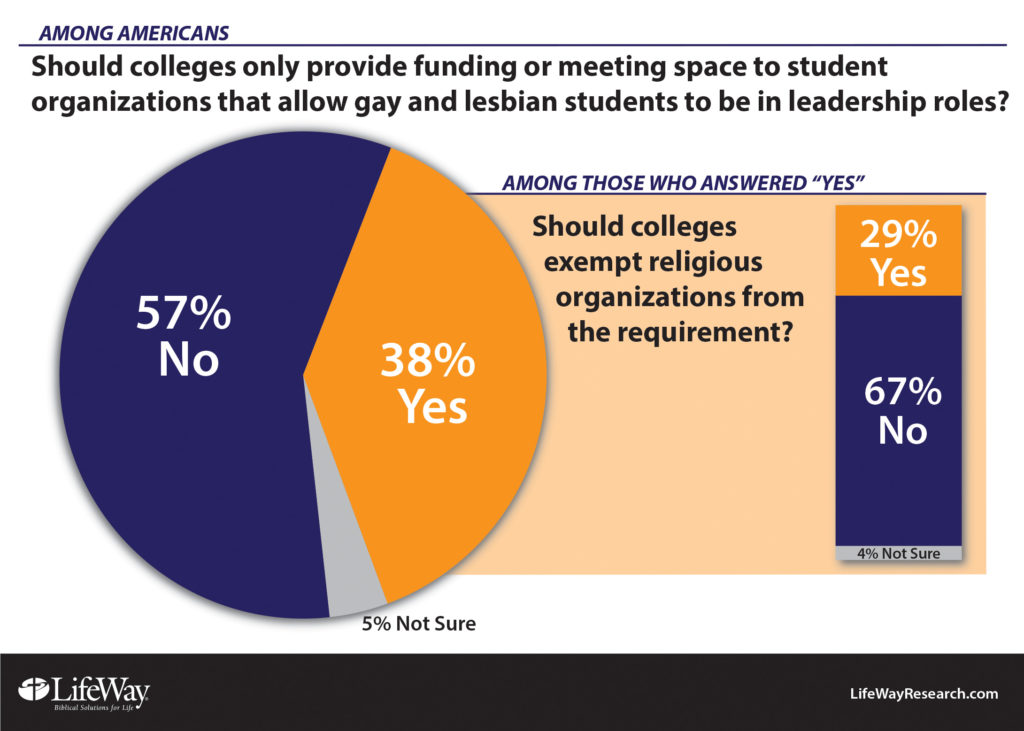 Researchers also asked Americans whether colleges should restrict student groups that do not allow gay and lesbian students to be leaders. Evangelicals and Catholics often believe that sexual behavior outside of marriage, and homosexual behavior, disqualifies a person from certain leadership roles.

See also  Who Is the New Church Dropout?

Just over a third (38 percent) say colleges should give funding and meeting space only to groups that allow gay and lesbian leaders. About 6 in 10 (57 percent) disagree with that restriction.

The combined response to the two questions indicates 68 percent of Americans believe colleges should not withhold funding or meeting space from religious student organizations that do not allow gay and lesbian students to be in leadership roles. Twenty-six percent believe colleges should withhold funding or meeting space from such organizations, while 7 percent are unsure.

Read more about the study at Lifeway Research.