The discovery of an abandoned refrigeration truck full of corpses on an Austrian highway on Aug. 27 and the body of a 3-year-old toddler washed up on the shores of Turkey on Sept. 2 have epitomized the tragic circumstances faced by masses of humanity trying to escape conditions in their home countries and find refuge in Europe.

With more than 350,000 refugees crossing into Europe in the first eight months of 2015, this human migration is believed by many to be the greatest in Europe since World War II. But workers with the International Mission Board in the Middle East and Europe say this crisis is an unprecedented opportunity for hope.

“God is working through war and suffering to move peoples into places where they can encounter Christ,” said James Keath,* an IMB strategy leader in the Middle East. During the last year, followers of Christ have seen people from seven different Syrian people groups, including Sunni, Orthodox and Shiite, come to faith, begin to meet as house groups and even reproduce groups in their refugee communities.

This is the reality followers of Christ are witnessing as hundreds of thousands of refugees make their way through towns, countryside and train stations in Europe, where Christian laypeople and volunteers offer water, food, clothing and conversation. Many refugees are hearing the Gospel for the first time.

“Syria is the humanitarian catastrophe of our day, but it is also one of the greatest opportunities of our day for gospel advance among some of the least reached peoples on earth,” Keath said. “In every country around Syria and now throughout Europe, we have the ability to openly engage Syrians like never before. And those working among refugees are finding not just broken lives but open hearts.”

According to the Christian humanitarian organization World Vision, some 2,000 people died attempting the journey across the Mediterranean Sea into Europe during the first six months of this year. Thousands have flooded into Serbia hoping to reach Hungary; a major entry point into the EU.

“The number of children making these journeys by themselves is hugely concerning to World Vision. They’ve either been separated from their families or their caregivers have been unable to afford to go with them,” says Conny Lenneberg, World Vision’s regional director for the Middle East and Eastern Europe. “There’s an estimated 8,000 unaccompanied refugee children in Serbia alone right now. We know from experience they are vulnerable to trafficking, forced labor, prostitution and other forms of violence.”

Many refugees have been stuck in Budapest, where they await transport to another European Union country. IMB workers are joining forces with Hungarian relief workers to be the hands and feet of Jesus. The majority of the refugees are from Syria, where 4 million have fled the horrors of ISIS terrorists and the effects of four years of civil war.

IMB worker Jennifer Freedman* spoke with a man in Budapest who explained what they are running from.

“Da’esh [ISIS] was in our village … and they hit me, and they gave me 30 lashes on my back,” the man said. “My son—he saw a beheading. We had to leave. That’s not life, that’s not living. I want a better life for my kids than Da’esh, I want my kids to go to school, to be educated. So we left.”

His family’s 1,800-mile journey was long and arduous, taking almost two months, and their hoped-for destination is Sweden. They plan to take a taxi to Vienna, since they have been thwarted at the Budapest train station while EU officials grapple with the biggest humanitarian crisis the EU has faced as a unified body.

Like much of Europe, many Christians feel overwhelmed with what to do in the face of such tragedy and need. Writing in The Washington Post on how American Christians could help, Lynne Hybels, Advocate for Global Engagement at Willow Creek Community Church, said that hearts, more than borders, have been closed to the suffering of the refugees.

“But a photograph of one small child opened a crack in millions of uninformed or hardened hearts,” she wrote. “As one who believes that we are all part of the same human family, I pray that the gates of our hearts will continue to open—like never before.”

So what can we do?

Other ways to help

Give to Baptist Global Response or Global Hunger Relief. Both provide refugee relief.

NICOLE LEE is a writer for the London Bureau of Baptist Press. A different version of this story originally appeared at BPNews.net.

Photo © 2015 IMB / Patrick Royals. Caption: A member of the Christian International Community Church of Vienna hands out Scripture material at an outreach event held at a refugee camp in Traiskirchen, Austria. The camp is about 20 miles south of Vienna. 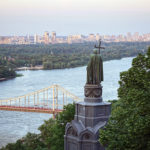 8 Resources to Help Pray for Ukraine