Jesus promised His disciples thrones in which to judge the twelve tribes of Israel, and almost immediately, they start itching to get in them. In their excitement they mistakenly told their friends and family.

Jesus had just moments earlier predicted His trial, flogging, and crucifixion when the mother of James and John made her ambitious pitch for their promotions. She probably was not there when He predicted His death to the twelve, yet her timing is horrible.

As she grapples at Jesus’ feet for the top two thrones for her boys, Jesus’ answer is directed entirely to James and John. The others are fuming, perhaps because the Zebedee boys beat them to the punch. Jesus takes this opportunity to teach these future church leaders about servanthood and humility.

But Jesus called them over and said, “You know that the rulers of the Gentiles dominate them, and the men of high position exercise power over them.—‭‭Matthew‬ ‭20:25‬

1. Deal with Problems as They Arise

This lesson was modeled, not overtly stated when Jesus called them together. Like cancer, conflict can grow and kill, especially when competition is a factor. Early detection is important, and early surgery is imperative (Matthew 18:15).

Kingdom business should not be handled like secular business. Jesus describes us as children not lords—slaves not masters.

When Martin Luther defended himself before the Roman Church, a history-making moment known today as the Diet of Worms, the German monk stood alone, unintimidated and resolute. Just before Luther’s audience with the pope, the cardinals, and the emperor, a friend moved alongside the maverick monk and asked, “Brother Martin, are you afraid?” Luther’s classic response was, “Greater than the pope and all his cardinals, I fear most that great pope, self.”

Ministry leaders can be the most dangerous people in the church. Our disposition determines whether we are a danger to God’s kingdom or Satan’s.

3. Serve Others Before Yourself

What happened to the thrones?

Leading is all about giving and serving, not lording and posturing. We are called to build other people up, which only works if we assume the posture of a slave.

You set the tone in your church by grabbing a towel instead of a scepter.

MARK DANCE (@markdance) serves as director of Lifeway Pastors. He speaks at churches, conferences, and retreats–often with his wife Janet. Mark has contributed to several books and offers weekly encouragement at MarkDance.net. 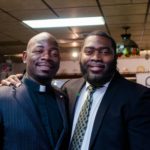