Perfectionism almost pushed Michael Phelps over the edge a couple of years ago. “I was a train wreck,” Phelps told ESPN. “I was like a time bomb, waiting to go off. I had no self-esteem, no self-worth. There were times where I didn’t want to be here. I felt lost.”

How can the most decorated Olympian in history become depressed to the point of considering suicide? Nobody in history has won 28 Olympic medals, 23 of which were gold. What more could a person want in life?

In 2014, Phelps hit rock bottom. A couple of DWIs and some unflattering social media photos drove him to considering suicide. His story is documented in this short video.

Michael reached out to retired NFL star Ray Lewis, who convinced Him to seek clinical help. Lewis also gave him a copy of Rick Warren’s book The Purpose Driven Life. Phelps said, “I started believing there is a power greater than myself, and there is a purpose for me on this planet.”

I’m so glad God used Lewis and Warren to help Phelps find a life beyond the pool in Jesus. Michael is not as mature of a believer as he is a swimmer, but that comes with time. One of the beautiful first fruits of his repentance was reconciling with his estranged father – the source of his perfectionism.

Many pastors and leaders know full well the pressures of perfectionism. We live and serve in the public for much of our lives. We also live privately under the gaze of our Lord. How then can we keep from falling into the same trap Michael Phelps did? I want to suggest three antidotes to pastoral perfectionism:

I started pastoring in 1987 and have wasted a lot of energy trying to please people, especially myself. Now that I serve the Church by serving pastors, I want to help them find their identity in Christ, not His Church.

If you reach your attendance, giving or baptism goals this year, celebrate those achievements with humility. Be careful not to embrace those victories too tightly because they are temporary.

Phelps found out that even his gold medals became fool’s gold when they defined who he was instead of what he did.

Embrace Your Own Imperfections

Imperfections are not excuses for our sin, but neither are they inherently sin. I have a legitimate problem remembering numbers which makes me bad at math, not a bad person or a bad pastor.

Will Rogers said, Everybody is ignorant, only on different subjects.

Save Some Grace For Yourself

Perfectionists are hard on everybody – especially themselves. Pastors should not only share the Gospel of saving grace, we should also save some of that grace for ourselves. You will make some mistakes, and you will even commit some secret sins throughout your ministry. To think otherwise is naive at best and arrogant at worst.

Leading your home and yourself “beyond reproach” does not mean leading perfectly. It means you will have to lead your ministry and family in humility and utter dependence on God.
When Michael Phelps traded his old life of perfectionism for a new life of purpose, he found a lane called grace. We all need to find that lane if we are going to finish strong. 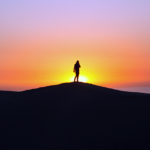