“I had to quit the ministry so we wouldn’t end up quitting the Church.” –a former executive pastor

Following the resignation of a high-profile Tennessee pastor last weekend the issue of burnout and failure again occupied the conversation of ministers and church members.

“Was he really just tired?”

“How can a pastor with that many staff get tired?”

Sometimes that is all there is to it, and this is what church members need to realize.

In 2009 I stepped away from the lead pastor role in my church with no ministry opportunity in sight. Nor was I looking for one.

I had been lead pastor at the church for 11 1/2 years, preceded by six years on staff at a different church, and two years as a single-staff pastor before that. Each position had varying degrees of highs and lows, successes and failures.

It was around two years after the bursting of the mortgage bubble and the beginning of the Great Recession. Although we were a totally debt-free church our people lost jobs and some had salaries cut substantially. This, in turn, affected the offerings. We could not sustain the salaries of all pastoral staff, so I resigned.

That was all there was to it. Mostly.

I was also tired mentally, emotionally, and spiritually. I could have stayed and put on a happy face, but to do so risked becoming a hireling—doing the work for salary alone, lacking both vision and passion.

It was a great church with great pastoral and support staffs. I had several weeks of vacation, did not have required office hours, had taken one or two sabbaticals, had paid holidays during the year, and the office was closed the week of Christmas. A pastor could hardly ask for more.

It wasn’t a perfect church, but I wasn’t a perfect pastor. I made some leadership fumbles that were my fault, but they were not ministry-ending. There was no “runoff committee” meeting each week. No one was asking for my head on a platter.

Still, I needed a break from pastoral ministry and I really did not care how long a break it was. I loved preaching, but the wear of pastoring and leading had taken a toll. Unbeknownst to me until later, pastoring had also taken a toll on my family. They were happy that I resigned.

If you are a church member (or attender) and you have wondered how it is a pastor can just up and quit—literally walk away—when things seem fine (or at least not terrible), here are a few things you need to know.

All “quitting” is not related to moral failure.

This is one reason it is so important to be honest when it is. Churches should never say, “The pastor is stepping down because he needs a break,” when he’s guilty of immorality. The pastor who hasn’t committed adultery, neglected his kids, or bankrupted the church via a gambling addiction, may still become discouraged or fatigued to the point of quitting. When the church says, “Our pastor is stepping down because of exhaustion,” it can be the truth, because sometimes that is what it is.

Burnout can happen to pastors who’ve done everything right.

If they aren’t exempt, what about the ordinary pastor who’s learning along the way, has periods of two-steps-forward-three-steps-back, and never quite seems to figure out the Peter Principle? Yet this same pastor loves the flock, handles adversity well, comforts the afflicted, and personally disciples new believers. Fatigue, weariness in well doing, and burnout are all real possibilities even for those who are doing things right.

Burnout can happen to pastors who have delegated all they can to others.

Yes, some churches have large staffs, and yes, in spite of that, some pastors micromanage their way to a heart attack. But not everyone does. Some pastors are excellent delegators, allowing those around them to carry heavy ministry loads. But, this cannot guarantee burnout will not happen.

Quitting can be the pastor’s last resort to save his marriage and family.

In ministry—despite all best efforts, creation of buffer space, and prayers to be sustained by the Spirit—there are times the family takes the shots. Spouses can be crushed under a weight of judgment and/or criticism, or kids are turned off by hypocrisy and political posturing (real or perceived) among church members. Then there is the ongoing struggle of balancing marriage, kids, and ministry (exacerbated in the case of bi-vocational ministry with a secular job in the mix). Sometimes the only way to repair and rebuild is to release the pastorate from the equation.

Unresolved attacks from previous ministry can unwittingly weigh down your pastor.

Pastors are not immune from the accumulation of bad experiences. They often leave a place of ministry that was not successful in ways they can see. Other times they leave with unresolved conflict because those causing the conflict do not want resolution. Or, perhaps their “resolution” is the pastor leaving. So the pastor leaves with no healing of the emotional upheaval.

Stack this two or three times and you find pastors carrying around heavy burdens—sometimes shamefully—as they try to lead your church. There is little good news on such a journey.

Sometimes quitting is the best way to stave off a moral failure.

Exhaustion is the body’s way of telling us some unpleasant facts: you are doing too much, carrying too much, and not resting enough. Or, you are sick and need medical attention.

Exhaustion is not the pastor’s friend. Exhaustion is an obstruction that holds open a door for temptation. When a pastor reaches the point that exhaustion, fatigue, or burnout increase the likelihood of adultery, addiction, or other sinful indulgence, quitting the ministry to save the pastor is the righteous road.

Many pastors who quit find secular employment and volunteer or part-time ministry a better fit. Others who quit take some time to learn, retool, rest, and then re-enter the ministry better equipped to avoid burnout. Some pastors seek therapy or counseling (personal, marriage, or family) to work through some of the unresolved issues they have carried for years.

Quitting a pastorate is not always the wrong decision for a pastor. Getting out can be restorative and lay the groundwork for a longer, healthier ministry overall, perhaps a ministry that does not include the pastorate.

Note: This post should not be interpreted as a critique of the Tennessee pastor mentioned at the top nor the reasons given for his resignation. 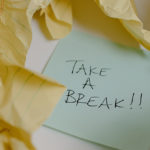 Pastor, Take a Break Before You Quit