When we started Saddleback, I was shy and lacked confidence in myself and my abilities. I felt Rick was already a superstar and had made a mistake by marrying me, a very ordinary woman.

I taught children’s Sunday school not because I was good with kids but because it was a safe place to hide out—they didn’t know if I got the Bible story backward or not!

I’ll never forget the moment when this issue of low self-worth and comparison came to a head.

At twenty-six, I was an “older Christian woman” to the women who became believers and joined Saddleback in the early days, even though many of them were chronologically older than I was.

They saw me as a mature believer, and I was given the responsibility of shepherding these new believers whether I felt capable of it or not.

The church organized a women’s tea, and I was to be the speaker. As I drove to the event, I hit the wall emotionally and spiritually. I was completely overwhelmed by a deep sense of failure, inadequacy, and incompetence.

I began to cry—hard— as my mind filled with scenes of my attempts to be the “best” pastor’s wife ever. I got angry at God and hurled complaints at him as fast as I could think them up.

I realized I couldn’t show up to this event with a tear-stained face, so I tried to distract myself. I turned on the local Christian radio station and heard an old song, “Ordinary People.”

The lyrics were an arrow of hope straight to my heart. “God chooses ordinary people. He chooses people just like you and me who are willing to give him their all—no matter how small their all might seem to them.”

I have to tell you that moment completely changed my life. God parted the waters of my understanding. I finally got it that God had intentionally allowed me to be an average person; I didn’t just stumble into being ordinary.

He could have made me different—smarter, prettier, more talented—but he had chosen me to be an average, ordinary person. And that was okay!

If God used only superstars, not much would get done, because he’s made far more average, ordinary people than superstars.

My tears of complaint and frustration turned to tears of gratitude. I began to reflect on John 6, the passage this song is drawn from, and thought of the little boy and his small lunch offered to Jesus.

A miracle took place from that lunch of loaves and fishes. Jesus multiplied the tiny offering into enough food for thousands of hungry people who were fed and satisfied.

All I had to offer to God was a tiny little lunch. In fact, I felt as if I had a tuna on white bread sandwich to offer to God while other people had salmon on brioche to give. My ordinariness felt like nothing in comparison.

But in that moment of clarity, God offered me the chance to adjust my self-perception and bring it more in line with the way he sees me.

That day I had the chance to say, “God, I choose to believe you allowed me to be an average, ordinary person, and I thank you for making me this way. I want to be like the little boy in the Bible story who didn’t have much to give to you but willingly gave it all.”

“He didn’t have a clue as to how Jesus was going to feed thousands of people from his small lunch, but he trusted that Jesus could do miracles. I don’t know how you can do much with the little that I am, but all that I am and possess is yours. Will you multiply my offering and do a miracle? Will you do that in me?”

In the decades since that momentous day, I’ve been a witness to God’s miracles as he has used the little I gave to him. He has opened doors of opportunity that still leave me speechless with amazement and gratitude.

It doesn’t make sense to me really—there’s no human reason, no human achievements I can point to that would qualify me for some of the things I’ve gotten to be a part of.

I wrote a book about this called Say Yes to God. At the end of the day, God is doing what he does best: transforming little into much.

You can make the same choice to adjust your perception of yourself. Are you going to continue to see yourself through the eyes of your childhood?

So it would not be unusual for you to say, “I am just an average person. I don’t have any stellar, outstanding qualities that make me different from or head and shoulders above other people.”

But in ministry, this view can become a trap. It can become a place where the enemy discourages us and holds us down and makes us feel as if we have nothing significant to contribute.

This may be the most important prayer you pray after your salvation: “God, what I have to offer you doesn’t seem very significant; it’s certainly not awe-inspiring. There are so many other people more talented, more beautiful, more intelligent, and more gifted, people who know more than I do and can handle more than I can.”

“But, God, this is what you’ve given me, and I give it back to you. I believe that little becomes much when it’s placed in your hands, so I’m asking you to miraculously multiply my little.”

If you want to keep the ministry from draining you dry, you must learn the strategies that help you cope with the difficulties, stresses, and pressures of the ministry. The first step is to accept the truth about who you are.

Revel in the knowledge that God has chosen you to be who you are and that he loves you exactly the way you are. Believe he wants you to give him what you think is so small so that he can make something miraculous out of your life. 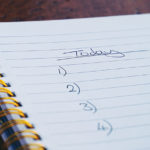