Pastor Grant Hasty had a big idea. Six years ago, his church, Crossroads Community, had just moved into a former restaurant along Highway 27 in rural Stearns, Kentucky.

The building still had a fully functioning commercial kitchen. Why not put it to work, thought Hasty, and invite some neighbors to lunch?

So in 2011, the church opened the Lord’s Café, a sit-down restaurant that offers home-cooked meals three days a week—and where no one ever gets a bill.

For the last six years, the church has served about 300 meals a week during the school year.

It’s a vital ministry in a county where about 22 percent of the people struggle to put food on the table, according to FeedingAmerica.org. That’s almost double the national rate of 1 in 8 people struggling with hunger.

At Thanksgiving, the church issues an open invitation to the whole community. The first year, 300 people showed up, and it’s grown ever since.

In 2016, the church—which has an average attendance of fewer than 100 —served 1,376 Thanksgiving dinners. About 120 volunteers from five states came to help. All the food was donated or paid for with donations.

The church served sit-down meals from 10 a.m. to 7 p.m. Each guest was waited on by a volunteer, who prayed with the guest and served the meal.

Many of the volunteers were church members, some who’d gone through struggles of their own.

Henry, who greets people at the door, used to be a drug dealer.

Karen, who works in the kitchen, has three adult children who struggle with addictions and lost her baby granddaughter to a childhood illness.

See also  Practicing Giving Thanks as a Church This Thanksgiving

Dean, who washes dishes, lost his wife to cancer. Before she died, he used to walk to the café—five miles each way—to pick up a meal for her.

“Everyone here has a story,” says Hasty.

Along with serving sit-down meals, the church also provided takeout meals for shut-ins and their caregivers and hosted a clothing giveaway at Thanksgiving.

“We want everyone who shows up to experience the love of Christ,” says Hasty.

For more information about Thanksgiving at Crossroads Community, visit CrossroadsCommunityBC.org. 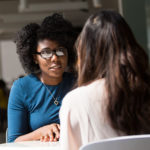 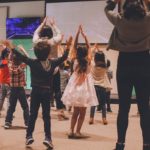