“What about Peachtree City?”

I asked that question to Dr. T. Vaughn Walker. He’s one of the most influential professors I’ve ever had. The seminary class he taught was called Ministry Evangelism and it was designed to show us how to lead our churches to address both the physical and spiritual needs in the community. Most of the needs addressed in the class centered around poverty.

That’s why I had to ask Dr. Walker about Peachtree City.

Peachtree City is a suburb of Atlanta, not too far from where I grew up. It’s a nice place. Real nice. People in Peachtree City don’t suffer from the same problems that were being addressed in our class. And at the time, I didn’t know where I would end up being a pastor. What if I ended up in a place like Peachtree City? How would I apply what I learned in Dr. Walker’s class to a context like that. So my question to Dr. Walker was basically this: How do you minister to people who don’t need to be ministered to?

His response was direct.

He was right. The affects of a fallen world show up in a variety of ways. The abundance of $25,000 golf carts in a community does not equal the absence of pain and suffering in that community.

I became a pastor shortly after that semester. The small town that I landed in didn’t have a large number of homeless people like the ones we studied in Dr. Walker’s class. There was no growing population of immigrants like the larger cities where my friends were living and serving.

But there was a school.

And that school was having problems.

Fights had been breaking out and there were rumors of more fights to come. Parents were keeping their kids at home. Fears were high.

I called the principal who was a strong believer. I didn’t know the details of the situation and I certainly didn’t have any solutions. I just offered to pray for him. He said yes and and then hit me with he first of many surprises I would have that day. He asked me if I could come to his office right away.

When I walked into the office, I could feel the stress. This wasn’t Casual Jeans Friday. This was Try To Keep The School From Blowing Up Day. I sat down in the principal’s office and he handed me a microphone. Well, no just any microphone. It was the kind they use at school every morning to tell you that they’re having pizza, milk, and corn for lunch today. Side note: is there another place in the world besides the high school cafeteria where they serve pizza, corn and milk in the same meal? I digress.

There I was, sitting in the principal’s office, holding a microphone. I really wasn’t ready for what was about to come out of his mouth.

“Can you say something to the student body?”

“Sure,” I said with the confidence of Moses the first time God told him to confront Pharaoh.

So on that instrument normally reserved for announcing the menu and telling some kid to report to Mr. Skinner’s office, I talked about Jesus and loving one another and peace. I’d like to say that all these years later people are still repenting and that the Southern Baptist Convention is putting up a monument there to commemorate the start Third Great Awakening.

That’s not the case.

All I can say is there was a need and the church was present. But the church was present before the need really boiled over. You see, before that, once a week a group from our church served breakfast to the teachers of that school in their break room before school started. So when I called the principal that day, he wasn’t taking a phone call from a stranger but from the pastor of the church that had been serving his staff.

Needs change depending on context.

But the impact of simply showing up does not.

I’m thankful that God put Dr. T. Vaughn Walker in my life to teach me that whether people are wealthy or poor, they could still use a church that cares enough about them to show up and trusts God enough to obey him with whatever happens next. 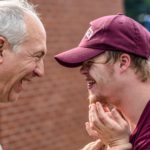