Some were praying for revival, while the others were trying to survive the apocalypse.

On May 3, National Day of Prayer festivities at the Georgia Capitol coincided with the filming of AMC’s zombie series The Walking Dead.

Mike Griffin of the Georgia Baptist Convention arrived at the statehouse early and saw a group of people in “eerie, dirty-looking black clothing” sitting on the statehouse lawn. “I thought maybe they were feeding the homeless,” he said.

While the National Day of Prayer observance was on one end of the capitol building, the crew of The Walking Dead had rented the rotunda and the other end of the building, according to Baptist Press.

The Walking Dead is one of the highest rated dramas on cable television. It’s a post-apocalyptic horror series set mostly in and around Atlanta. A sheriff deputy wakes up from a coma to discover a world overrun with zombies. He works to find his family and other survivors and fend off zombie attacks.

As the zombie crew set up cameras and gear to film the dark show on one side of the Georgia Capitol, Christians gathered on the other to pray God would heal America so that it would become “a beacon of light to so many dark places in the world.”

Griffin said crewmembers from the show stood to the side of the prayer gathering periodically checking out what was happening.

Gerald Harris, editor of Georgia Baptist’s The Christian Index, wrote that the crew inside the building was separated from the prayer event by only a curtain.

When he left, Griffin saw crews filming a scene for the show’s ninth season. The street between the capitol and legislative office building was filled with debris and broken down vehicles.

“It was an odd moment to say the least,” he said.

But this unusual occurrence is not the only time religion and zombies interact. The undead, like most of our pop-culture monsters, are things people use to cope with real-world problems, said religious historian Kelly Baker.

“Zombies are a way we can work out some of the things that make us nervous,” she told Facts & Trends.

Our current obsession with zombies shows “the nervousness we have about other people—that you can never be sure if your neighbor is with you or against you. The idea that anyone could turn on you, says something about the cynicism of the early 21st century.”

The zombie fascination also reveals our troubling desire to dehumanize others, she said.

“Zombie apocalypses have much to say about who counts as human and who doesn’t, which is something we should all pay attention to.”

Church leaders, she said, can help others find solutions to work through their worries about modern life. “Maybe the focus should be on how to engage with an ever-changing, fearful world and to sort reality from fiction.”

But for one day in Atlanta at least, the spiritual reality of prayer and the fictional world of zombies collided—without any causalities.

Though the juxtaposition was jarring for some. Harris said going from The Walking Dead set to the National Day of Prayer gathering “felt like I was transported from Dante’s Inferno to John Bunyan’s Celestial City within a matter of moments.” 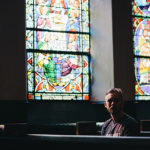 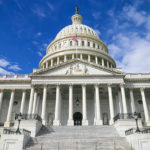