When a young woman, a young man, and their pastor sit down to hash out everything holy matrimony, including the theological framework for marriage, communication practices, fighting fair, sex, and money, we call that pre-marriage counseling.

While a few nearly wed couples are eager to hear several hours of life-changing information and advice, many simply buckle up to endure counseling sessions. They attend because it’s required. Perhaps this is their first stab at “adulting” as a couple, and they don’t want to fail.

Other couples want to be excited about the counseling, but they’re just not. The wedding day is quickly approaching, and other things capture their interest and imagination.

No married person can judge them. Youthfulness dulls all of our hearing, but there are a few things that need to be said and heard. So if you’re considering marriage, do whatever you must to stop long enough to listen.

And if you’re a pastor with the opportunity to counsel such a couple, care enough to make these five simple, essential statements:

Marriage is a wonderful blessing from God. The love you feel now is just the beginning. God created you to desire companionship and intimacy with one another, and marriage is a gift from Him to bless you and to allow you both to fulfill that desire.

While marriage is bigger than the needs and aspirations of two people, it’s much about those things. So take the cue from Solomon, and enjoy one another. Delight in one another. Build a household of faith. Dream crazy dreams and make big plans.

Share experiences that make you smile. Feel the warmth of each other’s touch. Be spontaneous. Earn a living and live generously. Speak life into one another with words of encouragement. Make love to the glory of God.

The wonder and blessing of marriage aren’t yours to hoard. They’re given for you to reflect the amazing love that God demonstrated to us in Christ Jesus.

The apostle Paul taught this in his letter to the Ephesians. When wives respect their husbands and husbands love their wives, the people closest to you then see the covenant relationship between Jesus and the Church. They see what unconditional, extravagant love looks like.

We are bent toward selfishness and hurt by it, but a Christ-centered marriage is built on sacrifice. It’s the kind of sacrifice that demonstrates the gospel, the good news that anyone can be reconciled to God through Jesus’ sacrificial death, burial, and resurrection.

This great mission of marriage elevates your union beyond your temporal goals and preferences into the realm of God’s eternal purpose to glorify Himself among every nation, tongue, and tribe.

God designed marriage to involve the larger community of faith

Wedding planning is a big deal. Many young girls spend time during their adolescence imagining their big day—choosing colors and venue long before choosing a husband.

Weddings are understandably exciting, but weddings are more than an event. No one needs a wedding to get married. You could go to the courthouse to formalize the marriage, but the two of you have decided to include family and friends in a public ceremony.

The purpose of this kind of public declaration of loyal love is more than grandstanding. When you mailed your wedding invitations, you were also asking these loved ones to stay involved in your life and your marriage. A wedding includes people who know you, love you, and care about your future success.

They’re not only witnesses who observe the moment you exchange rings, they’re people who will pray for you, counsel you, and invest in you. They’re the people who will help you keep the vows they’ve heard you make.

“Happily ever after” isn’t just for fairy tales. Marriage is a happy place, but it’s not just a happy place. It’s also a sad place, a challenging place, and a place where hardship happens.

Sometimes the pain comes from one another. You will hurt each other because sinners do sinful things. You’ll need to keep love, grace, and forgiveness in the “on” position so bitterness has no opportunity to grow in your hearts.

At other times, inexplicable difficulties will come from outside your marriage, and you’ll be asked to face them together. Like running in a sack race, it’ll be awkward, frustrating, and at times, seemingly impossible.

But your marriage was designed to not only endure hardship, but also to bear it better together than alone. Pain reveals your character, and it also reveals the character of your spouse. That revelation will push you to trust God and love each other in a way that’s impossible under more docile circumstances.

Don’t eschew trouble when it comes. Instead, respond to it with humble reliance on God, and see it as His instrument designed to sanctify you for His glory and your marriage for His purpose.

Your vows communicate a lifelong commitment to one another that reflect the will of God for your marriage.

It’s more than likely, however, that you’ve not seen the permanence of marriage modeled well. Even if your parents have been a positive example, faithful, healthy marriages where a man and a woman love one another until death parts them are now the exception.

In every marriage, the new wears off, responsibilities add up, and pressures pile on. Soon, the “fight or flight” instinct tempts you to wonder if going might be easier than staying.

As you look again to Paul’s letter to the Ephesians, it’s important to know he was writing to believers who lived in a culture that didn’t honor this holy institution. These Ephesian citizens were in Christ, but they really weren’t sure what holy matrimony looked like.

So he showed them a picture of Christ and the church.

Daryl Crouch is the executive director of Everyone’s Wilson, a network of gospel-loving churches working together for the good of the community. Prior to this role, he pastored churches in Texas and Tennessee for 28 years. He and his wife Deborah have four children. 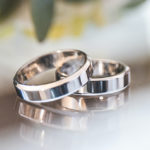