Since the Columbine school shooting on April 20, 1999, there have been 23 fatal church shootings.

Since the Columbine school shooting on April 20, 1999, there have been 23 fatal church shootings. The deadliest was the 2017 shooting at First Baptist Sutherland Springs in Texas, with 26 deaths including an unborn child.

Three church shootings have happened in Texas, Georgia and California, with Texas also being the site of the most deadly. World Changers Church in College Park, Georgia, has been the site of two incidents.

Here are the locations of all the fatal church shootings since Columbine.

In addition to these incidents at Christian churches, fatal shootings have happened at other religious sites, including at a Jewish synagogue, a Benedictine monastery, a Sikh temple, and an Amish school.

Deadly incidents are on the rise at churches, says Carl Chinn, a church security expert. According to his research, there had never been a mass murder (four or more killed) associated with a faith-based property before 1963.

Currently, around 4 in 5 Protestant pastors (80%) say their church has some type of security measure in place when they gather for worship, according to a survey from Lifeway Research.

Still, Chinn says, “Most churches spend far more time and money training their choir than they do investing in the safety of their staff and guests.”

Chinn knows pastors often think the odds are in their favor and more than likely they’ll never have to deal with a serious security threat in their church.

For those looking to become better prepared, Chinn advises churches to work with other leaders in the area.

“Work with your community first and foremost,” he says. “Know your law enforcement and fellow faith-based safety operators in your area on a first-name basis.”

Working with other safety professionals like those at area schools is also a good idea, according to Chinn. “Don’t be a silo of information,” he says.

For churches looking for simple steps to make themselves more secure, Chinn offers these nine guidelines. Serving by Safeguarding Your Church 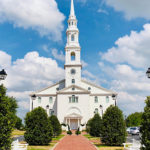 Americans Open to Most Churches, Regardless of Denomination