By Kevin Singer and Lauren Rink

A simple Google search tells the tale: We love to stereotype Gen Z. Broad generalizations like “Digitally dependent,” “tech addicted” and “the most isolated generation” have defined this cohort of young people, who were born roughly between 1995-2010 and together with millennials make up over half of the U.S. population.

New research from Springtide Research Institute suggests that contrary to these popular stereotypes, Gen Zers are in fact making friends—even close friends and best friends. Unfortunately, only about a quarter of young people say they’ve made friends in faith communities.

Most young people have five or more friends

Gen Z has been called the “loneliest generation,” and the COVID-19 pandemic has only exacerbated this problem. Yet, it is important to note that Americans across all generations are getting lonelier, causing some to describe this trend as nothing short of a loneliness epidemic.

Understandably, many have cited Gen Z’s use of smartphones, social media, and other digital communication tools as the root cause of their ailments. While a strong argument could be made that Gen Z was “born to be digital,” we’ve arguably forgotten that Gen Z is more than the digital tools and apps they use. To truly understand Gen Z, we need to spend less time studying their tech behaviors and more time studying their relationships.

Springtide’s 2019-2020 study, The State of Religion and Young People 2020, surveyed over 10,000 young people between the ages of 13-25 about their spiritual and social lives, including their relationships with peers and older adults.

Springtide also asked respondents where, or in what settings, they’ve met their friends. The largest proportion of young people say they’ve met friends at school (81%), followed by their local neighborhood (43%), or at work (38%).

Only 28% say they’ve met friends within a church or spiritual community, or about the same chance of meeting someone by happenstance (26%). Less common settings for young people to meet friends were through a sports team (25%), at an event like a concert or movie (19%), or through volunteer work (11%).

Only 28% of Generation Z say they’ve met friends within a church or spiritual community, or about the same chance of meeting someone by happenstance (26%). Click To Tweet

Why are so few young people meeting friends in formal religious settings?

Springtide collected additional data that could provide some clues. For one, a whopping 47% of Gen Z attend religious services once a year or less—hardly enough time to meet friends. On top of that, only 29% of Gen Z say they attend a youth group—though to be sure, this is more common for 13- to 17-year-olds (37%) than it is for 18- to 25-year-olds (24%).

47% of Generation Z attend religious services once a year or less, according to Springtide Research Institute Click To Tweet

To address this problem, the impulse of faith leaders and youth pastors might be to add more youth programming to the schedule or shoutouts to young people during weekly services. Findings suggest, however, that rather than building more youth programs or touch points into the church calendar, pastors and youth reps should focus on building trust.

It’s not hard to imagine why, if little trust exists between a young person and their church, mosque, or synagogue, they might have trouble making friends in these spaces.

Institutional authority is meaningless if a young person doesn’t trust that institution, and few young people trust the church—including those affiliated with one. Click To Tweet

What matters more to Gen Z is relational authority, which combines wisdom and expertise with qualities like genuine care, listening, integrity, and transparency. In a society increasingly connected by impersonal bonds, young people need deep, familiar connection before feeling receptive to the influence or guidance of others.

This is hard to do when stereotypes about Gen Z are so readily available, and particularly those suggesting that deep, familiar relationships are the last thing Gen Z wants. Rather than investing in stereotypes, faith leaders should invest in young people themselves.

Here are a few data-driven tips for getting started:

Listen—really listen—to understand. Half of young people (48%) feel as if no one understands them. However, 82% say they will trust someone who takes the time to hear what they have to say.

48% of Gen Z feel as if no one understands them, but 82% say they will trust someone who takes the time to hear what they have to say. Click To Tweet

Before attempting to speak into their life, consider whether you’ve demonstrated care. Eight in ten (79%) agree, “I am more likely to listen to adults in my life if I know that they care about me,” while 65% agree, “A person’s expertise doesn’t matter if they don’t care about me.”

If you want them to share, you need to share too. Eight in ten (78%) say they feel listened to when people show they understand what they’ve been through. About the same portion (79%) say they trust someone who shares things about their life. Young people want to know you, not just the institution you represent or the goals and purpose that drive that institution.

Remember what they said. Eight in ten (78%) say they feel listened to when people remember what they’ve said after some time has passed. Practically speaking, this also means remembering important details about their life, whether it’s their birthday, their major, or their favorite movie.

When it comes to anchoring young people in Christian community, matching t-shirts, cool bumper videos, and attractional sermons have lost their appeal because they are meaningless without trust. — @KevinSinger0 @LaurenRink Click To Tweet

What these practices have in common is they demonstrate you’ve made their personhood the priority, not a point you’re making or a program you’re pushing. When it comes to anchoring young people in Christian community, matching t-shirts, cool bumper videos, and attractional sermons have lost their appeal because they are meaningless without trust.

If church leaders shift their focus toward trust-building, they will find these efforts will not go unnoticed with Gen Z.

Kevin is head of media and public relations for Springtide Research Institute, professor of religious studies at two community colleges, and a Ph.D. student in higher education at North Carolina State University.

Lauren is a senior in public relations, marketing, and social statistics at Taylor University and a media relations intern at Springtide. 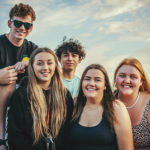 What Churches Must Do to Reach Gen Z