Even through a pandemic, God is moving. He’s always moving and growing His Kingdom, not despite traumatic events, but through them. All around the world we have seen God continue to make Himself known, grow His disciples, and bring good news to a world yearning for hope.

In a recent Lifeway Research article, we find that “In 1900, twice as many Christians lived in Europe than in the rest of the world. Today, the Christian population in Europe has a flat growth rate, while Africa and Asia continue to experience dramatic growth.” Also, “Currently, almost 640 million Christians live in Africa and 604 million in Asia, while 544 million call Europe home.”

In 1900, twice as many Christians lived in Europe than in the rest of the world. Today, almost 640 million Christians live in Africa and 604 million in Asia, while 544 million call Europe home. Click To Tweet

Christianity is no longer predominantly a white, Western religion as some perceive it to be. God’s Spirit is reaching beyond all borders and calling all nations to Himself.

A new survey found that 1.5% of Iranians identify as Christian. According to Article18, a London non-profit promoting religious freedom in Iran, “If this figure is extrapolated across Iran’s over 80 million people, then even taking into account the approximately 300,000 ‘recognized’ Christians of Armenian and Assyrian descent, this would suggest an additional one million converts to Christianity.”

As the Iranian government has failed to live up to its promises, its people have had to seek hope in other places. A source from this article states, “Water is limited, pollution is terrible, structural planning is poor. A lot of people don’t trust the government at all.” And since the government and Islam is one, people are turning away, toward a God who is always faithful.

Christianity Today quotes Rosa A. Duarte de Markham, coordinator of the department of biblical translation at the Missionary Cooperation of Mexico (Comimex), saying, “Mexico has been in mourning for several years due to enforced disappearances. Surely this has led to the search for God as a comforter, to value peace and justice. … On the other hand, the need to rescue the family nucleus has led mothers and fathers to search in the Word of God for values such as fidelity in marriage, harmony, love of children, honesty, and a healthy lifestyle.”

People understand the value of love and peace and morality for better living. They are understanding that can only come through the Word of God.

In Cambodia, the number of Christians have grown to more than 300,000 with an 8.8% growth rate, according to this article. Within tribal areas, varying missions organizations work together in unity to translate the Bible in tribal languages, to train future leaders, and raise up a new generation of believers.

China, too, is seeing growth in Christianity even amid persecution. According to The Economist, “Protestant Christianity is probably the fastest-growing faith, with at least 38 million adherents today (about 3% of the population), up from 22 million a decade ago, according to the government’s count. The true number is probably much higher: perhaps as many as 22 million more Chinese Protestants worship in unregistered ‘underground’ churches, according to a new study by researchers at the University of Notre Dame.”

Protestant Christianity is probably the fastest-growing religion in China, with 38 million government-recognized adherents and potentially 22 million more worshipping in underground churches, according to The Economist. Click To Tweet

Especially under persecution, Chinese Christians are not only creating converts but disciples as they risk it all to be believers.

According to research from Gordon Conwell Theological Seminary, “As Christianity continues to grow worldwide, the main driver of the growth remains Africa, increasing at a 2.86% rate. Before 2050, it will be the first continent that is home to more than 1 billion Christians.”

Conrad Mbewe states that in his own country of Zambia, “the church provides 60% of the health facilities of the entire nation. The church also runs the best schools in the country, in terms of both the physical structures and the holistic development of the students. Even when there has been need for disaster relief, the church has tended to be the vehicle chosen by donors to deliver help at the grassroots level. This has helped the nations of Africa that are on the brink of abject poverty to appreciate the church and to still have hope for the younger generation.”

Before 2050, Africa will be the first continent that is home to more than 1 billion Christians. Click To Tweet

As we look at these soundbite statistics of Christian growth around the world, what lessons can we learn as we try to reach those around us? Of course, our Western world lives in a different context, but through these articles and research, those of us from the U.S. can take some things to heart.

People are looking for hope, knowing the world can’t satisfy.

In countries like Iran or China, where governments try to enforce their beliefs upon their people with promises of utopia, unfulfilled hopes are helping people realize that this world and other gods (spiritual or political ones) can’t be trusted or can’t satisfy.

When confronted with a God who doesn’t change, who is all-good and all-sovereign, people are finding the good news they’ve longed for.

The Bible helps us live morally and upholds the family unit which leads to greater joy.

Most countries outside the Western world, operate around the family unit. No other belief system lifts that up with more sound counsel and advice than Christianity. People are looking for practical, honest, real ways to live better, and the Word of God provides that.

Although a good, moral system isn’t what saves, truth with grace found in the Bible provides a way for all who believe to find a joyful way to live rightly. The Bible provides wisdom this world is craving for.

Although a good, moral system isn’t what saves, truth with grace found in the Bible provides a way for all who believe to find a joyful way to live rightly. — Y Bonesteele Click To Tweet

When different denominations have a unified front seeing Jesus as Lord of all without bickering, they become a stronger witness to those around them. When we fight amongst ourselves over less important issues, those who watch us see only confusion and chaos which isn’t appealing to those searching for truth.

In many of the countries mentioned above, persecution leads to stronger disciples. Faith doesn’t become a popularity issue or a trend; it’s a life or death decision. A convert’s commitment comes with a cost that causes transformation and new life. In the U.S., sometimes we fear persecution for our beliefs, so we worry about government or cultural influences.

But if no persecution is present, how does our faith cost us anything? Without suffering for our convictions, how do we know we truly believe? When our faith costs us little, we tend to make little of our faith.

When our faith costs us little, we tend to make little of our faith. — Y Bonesteele Click To Tweet

Helping the poor and marginalized out of love garners respect from unbelievers.

The church in many countries is the vehicle bringing life, hope, and love to many where the government can’t. Like in Zambia, mobilizing food distributions, engaging in education, fighting for human rights––these are just some of the ways the church is alive and at work, bringing mercy and justice to a world in need.

We can learn from churches around the world that we worship inside the church so we can reach outside the church. We must be the hands and feet of Christ to our neighbors around us that the world may see Him, know Him, and love Him.

We can learn from churches around the world that we worship inside the church so we can reach outside the church. — Y Bonesteele Click To Tweet

Throughout history, the Christian church has been a force for bringing good news to all, spiritually and otherwise. And in doing so, God’s Kingdom grows. Let’s continue learning these lessons from believers in other countries to help us grow in our own maturity and the maturity of God’s church for the glory of God.

Let us praise God that one day all tribes and tongues will worship and bow before Christ Jesus, our King! And with that, come, Lord Jesus, come! 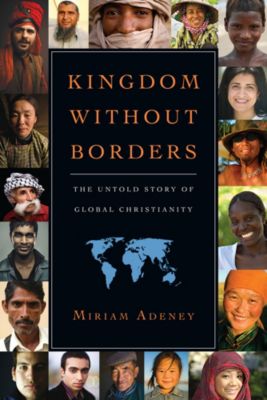 Kingdom Without Borders: The Untold Story of Global Christianity