“How pleasant it is when God’s people live together in unity” (Psalm 133:1). Paul also calls for faithful Christian churches to imitate the Trinitarian Godhead of the Father, Son, and Holy Spirit by encouraging unity within their memberships (Ephesians 2:19-22).

The church not only reflects Christ, but also the culture in which it exists. Today, that culture largely focuses on youth, at least in Western nations. Many churches dedicate a large percentage of their resources to attracting Millennials. Unfortunately, Christians over 60 within the church often feel marginalized as a result of this focus on youth. The problem involves an inability of churches to retain Millennials and Generation Z.

As churches focus on reaching younger generations, Christians over 60 often feel marginalized. It doesn't have to be that way. Click To Tweet

How then can churches actively appeal to the needs of Millennials without pushing grandma and grandpa into the corner? How can churches responsibly achieve new and sustainable growth without damaging their roots? The solution requires churches to recognize that Christian seniors over 60 actually have the “secret sauce” that younger generations crave.

66% of those who regularly attended church as a teenager drop out of church as a young adult. Click To Tweet

Additionally, many young adults lack a sense of loyalty to any particular church. Most churches keep copious records on how many people walk forward to make “decisions” for Christ, but few keep watch to ensure that the sheep do not wander out the back door. The Lifeway Research study found 71% of those who dropped out of church as a young adult say leaving wasn’t an intentional decision. Similarly, Pew Research Center reports that of those raised Protestant now identifying as “unaffiliated,” 71% say they “just drifted away.” According to the Barna Group, 36% of Millennials who leave the church cite a lack of ability to ask pressing life questions. Another 23% claim that churches discourage them from expressing doubts about their faith.

71% of those who dropped out of church as a young adult say leaving wasn't intentional. Similarly, @pewresearch found 71% of those raised as Protestant Christians who are now religiously unaffiliated say they "just drifted away.” Click To Tweet

These pieces of data suggest that even young adults who profess faith in Christ and desire to fully follow Him often receive poor if any real discipling.

Social media, television, the internet, and other societal sources pummel young adults with a barrage of opinions, worldviews, information, opportunities, and choices. Most feel overwhelmed and ill-equipped to know how to discern the right course. Many either cannot or will not talk to their parents about these struggles.

Worse yet, they have no one else to turn to for answers and guidance besides their friends, who likely find themselves struggling with the same dilemmas. The data from Lifeway Research shows that “those who stayed in church felt welcomed, connected, and mostly agreed with what they heard at their church. Those who dropped out of church had vastly different perceptions of the congregations they left behind.”

Because some young adults can view the church as intolerant, judgmental, and hypocritical, they see themselves as outsiders and view the church as an unsafe place to act natural or to express doubts. Churches currently employ multiple solutions in an attempt to address these problems.

Thousands of churches seek to combat the young adult exodus by creating new programs designed to give young adults a sense of belonging. One popular method used to tie the next generation to the church involves processing new believers through programs at breakneck speed with the goal of getting them plugged into serving roles within various church ministries.

These kinds of programs call people to social action but do little to challenge them to spiritual obedience. They confuse involvement with spiritual growth, and often unwittingly promise what they cannot properly deliver, and churches end up losing people in the process.

Without direct discipleship, little hope exists for these young adults to ever produce fruit because they have not been properly grafted into the more mature rootstock of the church.

The sturdy rootstock of many in the Silent Generation and among Baby Boomers provides an untapped resource for churches seeking to meet the needs of young adults. These uniquely qualified mature Christians can bring about tangible results that cultivate authentic disciples. Life groups and Sunday School classes provide excellent vehicles for encouraging fellowship, relationships, and accountability. In order for the Christian church to continue to produce mature disciples capable of reproducing themselves, it must make a firm commitment to not just preach to its people or for them to fellowship together, but to actually teach them the Bible.

Young adults crave biblical guidance. Forty-three percent who have disconnected with the church claim their church did not teach the Bible clearly enough or often enough and that God seemed missing from their church experience.

Most mature Christians over 60 learned biblical literacy in Sunday School. Seniors gained the skills necessary to navigate life and resist temptation through memorizing and internalizing Scripture. When faced with pressing temptations they understand that one cannot rely on a Google search for answers. Instead, one must possess the ability to immediately summon up portions of God’s Word they have hidden in their hearts.

One of the main selling points for life groups or accountability groups usually involves some sort of reference to the principle of iron sharpening iron found in Proverbs 27:17. But this may not occur if both pieces of iron start off dull. Peer mentoring runs the risk of placing leaders in the position of leading others through life seasons they themselves have not yet successfully navigated and therefore have little or no context. The result is often disappointment and disillusionment on the part of both mentor and mentee. Churches can improve their prospects of reaching and keeping young adults by enlisting mature Christians over the age of 60 to serve as mentors.

Peer mentoring runs the risk of placing leaders in the position of leading others through life seasons they themselves have not yet successfully navigated and therefore have little or no context. Click To Tweet

Young adults prefer to attend a church where older adults provide life lessons and advice to younger adults. According to Barna Group’s Churchless: Understanding Today’s Unchurched and How to Connect with Them, both skeptics and the unchurched rated themselves as “much more likely” to attend a church that offers this kind of next-generation mentoring than other more conventional outreach methods.

Since many seniors over the age of 60 derived much of their sense of worth from raising a family or excelling in their careers, they look for a place that will give them some of that same feeling. Family members today live farther away from one another than past generations did. As a result, the mentoring that young adults received from aunts, uncles, and grandparents must be found elsewhere. Senior Christians can fill the role of surrogate a parent or grandparent for those who do not live near their families.

In addition, plenty of young adults didn’t grow up with healthy role models because one or both parents did not live with them. Senior Christian mentors can model ways for the next generation to live out their faith in such a way that it enables them to effectively lead their families and to leave a godly legacy.

The average life expectancy in the United States currently sits at 78 years of age, and by 2030, should increase to 80. This means Christians over the age of 60 can provide a previously untapped resource for many churches because they have a great deal of life yet to give. Thankfully, many mature Christians have a wealth of information and desire to share it. They spent years in high-paced careers and the slow pace of retirement causes them to look for things to do.

Churches should take care to activate older, mature Christians and not merely placate them. Click To Tweet

Churches should take care, however, to activate them and not merely placate them. Mature Christians over the age of 60 held jobs as CEOs, accountants, homemakers, teachers, doctors, and many other professions that required them to think analytically, creatively, and to lead others. Just because they stopped bringing home a paycheck from the office does not mean their talents have also retired.

These older adults can provide a tangible value in terms of designing and leading ministries as well as serving as ambassadors to the community at large. Today’s senior Christians don’t want to merely serve. They want opportunities to lead and to pour into others. Seniors also represent a great choice to mentor the next generation because they have both the time and perspective young adults so crave, and those young adults know it.

The practice of grafting commonly appears in the Bible as a metaphor for the joining of God’s people to Himself and to one another within the church. Farmers routinely use grafting to join parts of two plants together in such a way that they form one single plant that produces healthy fruit. They first must cut and peel back the rootstock and then prepare the scion (young shoot or branch) in order to insert the scion into the rootstock and then bind them tightly together. With proper care and hydration, the two will grow together.

Mature senior Christians provide the strong healthy rootstock onto which churches can graft young adults. These seniors willingly allow God to peel back a portion of their lives in order to provide a safe place in which to join the next generation scions. The mentoring relationship tightly binds them together as both grow together and bear fruit. The fruit of the Christians over 60 will not rot, but will remain sweet if they continue to grow by helping younger Christians to grow as well.

Diana Francis currently attends Dallas Theological Seminary where she will soon complete a Masters in Theology and a Masters in Christian Leadership. She lives in Corona, Calif. where she serves as a lay-leader at her church. 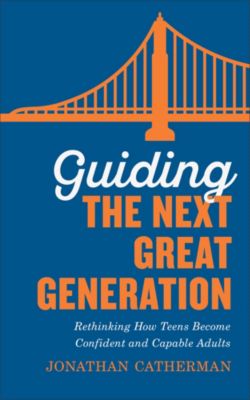 Guiding the Next Great Generation: Rethinking How Teens Become Confident and Capable Adults