I can still remember the first DVD I ever owned: 1999’s The Matrix. Not only was it wonderful to see all the groundbreaking effects and stunts in amazing new clarity; I also got to enjoy the whole new concept of bonus features. These became a huge selling point.

Bonus features are great for nerdy types like me. In those included on The Matrix DVD, the directors talked through various creative choices. So that’s why it looked so cool. The set-piece effects wizardry was all explained. So that’s how they did that. Basically, all the behind-the-scenes beans were spilled.

Some people hate all this, of course. They’d rather just see the movie and leave the magic unexplained. But it gives me more appreciation for the movie rather than less. Even a bad movie is somewhat improved by hearing those behind it talk through what they were at least trying to accomplish.

The Bible gives us unique insight into the brokenness of creation, including our bodies. Paul has shown us that the world has been subjected to futility by God himself, such that it does not work properly. What bewilders us in nature is explained to us in Scripture. So we, of all people, should understand and appreciate the extent to which this world is fallen. God has given us a unique backstage pass into why this has happened and what it means. We should be able to make sense of it in a way that no one else can. It’s like we’ve been given exclusive access to all the best DVD extra features: explaining what is really going on, showing us behind the scenes, and, above all, giving us the words of the Creator himself to help us understand why things are the way they are.

This insight should, at the very least, make us unusually compassionate. When we see people going through the throes of bodily brokenness—perhaps some chronic illness, or the recurrent pain of body shame, or having to pick their way through the wreckage of some sexual sin—we have no reason to stand aloof, as if these things are beneath us, or somehow make those people less worthy than us. When someone is going through something we’ve never had to face personally, it is all too easy to adopt a mindset of “pull yourself together,” even if we would never actually say those words. Yes, where sin has taken place, there is personal responsibility and culpability, but this does not justify a cold attitude or a lack of sympathy as the sinner wrestles with the aftermath.

Yes, where sin has taken place, there is personal responsibility and culpability, but this does not justify a cold attitude or a lack of sympathy as the sinner wrestles with the aftermath. — @SamAllberry Click To Tweet

It was a few years ago that I first met someone who experiences gender dysphoria. A mutual friend introduced us, and this individual—I’ll call him Max—was kind enough to spend an afternoon talking me through his story. I’ve struggled with all sorts of sins and temptations, but I’ve never experienced gender dysphoria. I’ve never not felt male or desired to be female. There are plenty of other ways my desires and wants have been twisted by sin, but this has not been one of them.

There were two ways I felt I needed to relate to this new friend. The first was to make clear that I had never gone through what he was experiencing. I couldn’t come close to saying, “I know just how you feel.” I didn’t. Max was articulate and honest enough to help me understand what he was dealing with far more than I’d been able to beforehand. But there was no obvious and neat correspondence between his trial and any I had faced. His experience was quite different from mine.

Romans 8 puts us in the same boat—we’re all making our way as fallen people through life in a fallen creation. — @SamAllberry Click To Tweet

At the same time, though I couldn’t claim to know his experience, I could show him that we are all in this together. Romans 8 puts us in the same boat—we’re all making our way as fallen people through life in a fallen creation. However alien his experience might seem to me, we are definitely part of the same tragically broken species. At that more fundamental level, I could identify with him.

None of this is to say there is no place for moral evaluation. There were certainly some urgent biblical truths my friend and I needed to discuss. There were, to my mind, a number of significantly unbiblical ways he was thinking about his situation which, if pursued, would only take him further from God’s will for him. We had some hard and raw discussions. But at the same time, my understanding of our shared fallen humanity meant that there was no reason for me to feel superior or look down on him or to be in any way judgmental. It is not as if I’m gliding through life unscathed by the fall.

We’re all made of the same stuff and subjected to the same frustration. Christians should be the most compassionate people on the planet. — @SamAllberry Click To Tweet

It should be this perspective that enables us as Christians to be people of grace and truth whatever situation we find ourselves in or responding to. If the occurrences of brokenness we are most conscious of are our own and not those of others, we will be heading in the right direction. However unlike our own experience are to others’ experiences, we won’t dismiss them or push them away. We’re all made of the same stuff and subjected to the same frustration. Christians should be the most compassionate people on the planet.

Sam speaks around the world as a preacher and apologist, and is part of the leadership team at Immanuel Nashville. He is the author of 7 Myths about Singleness and What God Has to Say about Our Bodies.

Content taken from What God Has to Say about Our Bodies: How the Gospel Is Good News for Our Physical Selves by Sam Allberry, ©2021. Used by permission of Crossway. 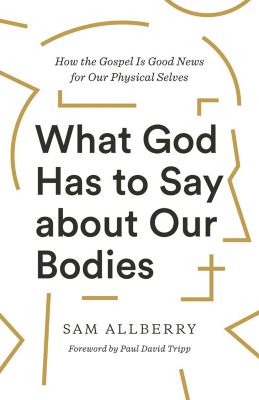 What God Has to Say About Our Bodies