On May 3, the United States government increased the annual refugee admissions cap from the historically low 15,000 to 62,500, with the goal of 125,000 for the following year. As the body of Christ, how are we to respond to refugees currently in our communities or those soon to come?

Similarly, a 2016 Lifeway Research study found 86% of Protestant pastors believe Christians have a responsibility to sacrificially care for refugees and foreigners. Yet, pastors say their churches are twice as likely to fear refugees than help them, with 44% saying their congregation has a sense of fear of global refugees coming to the United States.

Pastors say their churches are twice as likely to fear refugees than help them, with 44% saying their congregation has a sense of fear of global refugees coming to the U.S. Click To Tweet

What drives this hesitancy to help from some Christians and outright fear of refugees from others? Some of the most common justifications are worries about an increase in crime, strain on U.S. taxpayers, and a fear of the “other.”

Some believe that with increased refugees and immigrants, crime rates will increase and harm neighborhoods and communities. The statistics, however, undermine the idea that foreigners or asylum seekers are more prone to crime.

In a 2017 research study from New American Economy, using refugee data from “10 cities in the US that received the most refugees relative to the size of their population between 2006 and 2015. … Rather than crime increasing, 9 out of 10 of the communities actually became considerably safer, both in terms of their levels of violent and property crime.” Some cities even saw violent crime rates drop by 77%.

Most immigrants and refugees come from traditional or eastern cultures with values that include respecting authority and valuing community, which actually helps to lift up a neighborhood.

Appealing to a potential economic loss as a reason to not provide care, does not seem to match with a Christian ethic. Even if it were the case that bringing in refugees had a negative impact on the economy, what a small sacrifice to save a life of one fleeing a place of persecution, lack of liberty, or constant danger. As Christ is our refuge, how can we show Christlikeness and be a refuge for others?

Almost half of American evangelicals (48%) believe recent immigrants are a "drain on economic resources." Click To Tweet

Still, almost half of American evangelicals (48%) believe recent immigrants are a “drain on economic resources,” according to a 2015 Lifeway Research study. But the reality is that research refutes the idea that immigrants cost Americans billions of dollars. According to the National Academies of Science, Engineering, and Medicine, “immigration has an overall positive impact on long-run economic growth in the U.S.”

I think the main reason many fear a relaxed immigration policy is fear of “the other.” They’re not like us. They have different and strange habits, traditions, cultures, and religious beliefs.

When fear sets in, we lose sight of the imago dei in each human person we encounter who is different from us. — Y Bonesteele Click To Tweet

Despite research confirming that the majority of immigrants to the U.S. are Christian, “the other” can feel uncomfortable. It’s not just an American issue. It’s a sin issue. Those who are different in our midst complicate our lives. They challenge us, and that can be terrifying. And when fear sets in, we lose sight of the imago dei in each human person we encounter who is different from us. We see a statistic or a stereotype or a dangerous figure we saw in a movie once. Our fight or flight responses are triggered.

But this is not just a research article. It’s a personal one.

The fall of Saigon, the capital of South Vietnam, in April 1975 signaled the end of the Vietnam War as the last remaining American troops left and the Communist government took over. Three months later I was born. And two years later, my family started our escape out of Vietnam. My grandparents had become Christians through missionaries years before. Now, my family knew that our freedom to vote, to live freely, to worship Christ as Lord, would be taken from us.

Our next-door neighbor was a Communist supporter, and all were told to spy on each other at that time. So, like the ending of The Sound of Music, we left our house with travel clothes underneath our good clothes, as my mother told people we were going to visit her mother-in-law.

Weeks before, my father went out on a boat with a fisherman friend every day as they scouted out the land, looking for where it was best to depart without being seen by authorities. And months before, my mom had been quietly exchanging money and jewelry for gold, as it was packable and can be used in any part of the world. My parents had a plan.

When my dad and his friend found a good rendezvous point, they secretly told a few friends who were trying to leave as well. The day came, and my mom prayed for safe travels. Remnants of war still scattered the countryside. We had to cross a long beach where land mines had been planted and were ready to explode at the touch. By the sheer grace of God, none went off. Mom says, “Angels led our steps.”

We had to cross a long beach where land mines had been planted and were ready to explode at the touch. By the sheer grace of God, none went off. — Y Bonesteele Click To Tweet

My mom led the five of us kids, ages 2 to 8, silently and cautiously to the boat that was to take us to freedom. In a round fishing canoe, we were rowed in small groups to a larger fishing boat, the size of a water ski boat. My dad had the mission of picking up the fisherman’s mother on his scooter to take her to the point of departure but was running late. As the last group was leaving, my dad arrived just in time.

We all huddled in the bigger fishing boat, while my mom continued to pray for safety as we set off through the South China Sea. But after 10 days, we ran out of gas and food. Again, God provided. A Swiss cargo ship came by. While they would not rescue us, they gave us gas and food for the long journey to the Philippines where the U.S. had refugee camps waiting.

Being only 2 years old, I don’t have any of these memories, but they were told to me by my family. My parents were hardworking, churchgoing people, struggling through integrating, but happy to one day be American citizens. I grew up in a Vietnamese church in California that taught me who God is and the truth and holiness of His Word. I was involved in my Christian club in high school and in a college ministry, going on short term missions trips as God developed a heart for evangelism in me. I went to seminary, have done ministry in a variety of roles, and lived on mission with my family in Spain, eager to see people come to know and trust a loving God. Now, I live in Tennessee and help write articles and resources that hopefully will grow the church and God’s kingdom.

Though I’m not anyone famous, every ministry opportunity I have, I try to use it for God’s glory. By the grace of God, and because churches cared for my family (as they also did for other refugees at that time), I can now use my gifts and talents to continue glorifying God, reaching people others may not be able to.

Jesus cared for the weak, the lost, the foreigner, the marginalized, the persecuted. He did not want any to be lost. — Y Bonesteele Click To Tweet

Jesus cared for the weak, the lost, the foreigner, the marginalized, the persecuted. He did not want any to be lost.

Let us be like the shepherd who left the 99 to go after the lost one and in finding it, says, “‘Rejoice with me, because I have found my lost sheep!’” (Luke 15:6b)

Regardless of your political preferences, that refugee or immigrant in your neighborhood is there for a reason. That one refugee, that one stranger, that one soul, rescued from civil war, from poverty, from drought, from disease, from dictators and places without freedom, can be the next Billy Graham or the next Elisabeth Elliot, or the next child of God used for His purposes.

Many more will come after him or her. What will your church’s response be? 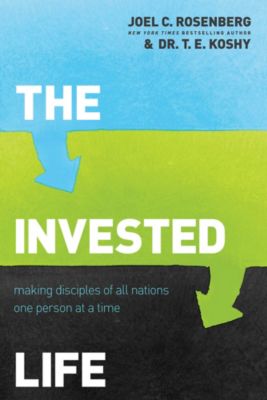 The Invested Life: Making Disciples of All Nations One Person at a Time