In college, I had an accountability partner. Our college ministry encouraged us to help each other grow in our faith, “spurring one another on towards love and good deeds” (Hebrews 10:24). Whether we knew how to do that or not, and whether we did it the right way or not, we weren’t quite sure.

A few decades ago, accountability groups and partners were a common part of ministry, but as time passed, they seemed to have slowly died out. What happened?

A Lifeway Research survey discovered that only 15% of Protestant churchgoers strongly assert that matters of faith are a part of their regular conversations with fellow believers. Also, 35% agree that when they talk with other Christians, religious issues don’t usually come up.

Recognizing the wane in formal groups but the need for Christians to encourage each other in our walks with Christ, we asked four discipleship leaders their thoughts on “accountability.”

“If I’m honest, the word ‘accountability’ is uncomfortable for me, not because I bristle at authority or responsibility, but because I’ve experienced an unhealthy version of accountability that wounded me deeply,” says Tara-Leigh Cobble, founder of D-Group, an international network of weekly discipleship and Bible study groups. “Even still, I can’t deny our call to it within the body of Christ.”

“We might not use the word ‘accountability’ as much today because it has bad connotations, or we may not know what it truly means,” adds Ashley Chesnut, associate young adult minister at The Church at Brook Hills in Birmingham, Alabama. “Also, if I understand accountability only as about sin or a check-in, then I’m becoming more legalistic with it than grace-based.”

Greg Jao, director of external affairs for InterVarsity, says the concept can go wrong in two areas. One, when someone fails, “we don’t know what to do, other than urge that person to try harder next time. There’s a gap in our discipleship that doesn’t teach us how to help people with spiritual failures, large and small.”

"If all you’re trying to do is manage the sin behavior, then ultimately accountability becomes exhausting, draining, and people drop it.” — @GregJao Click To Tweet

Secondly, Jao says modern accountability overly focuses on sin to avoid. “That’s important, but rarely do I see us encouraging accountability for people wanting to pursue things that they desire: intimacy with God, prayer, journaling, etc. If all you’re trying to do is manage the sin behavior, then ultimately accountability becomes exhausting, draining, and people drop it.”

Bill Noe, associate state director for Texas Baptists Collegiate Ministry, adds that without intentionality from a leader, accountability groups can become a time of commiserating in the sin rather than creating a path forward. “For example, a group of college guys can get together, struggling with the same sin, feeling like it’s okay because they’re all in the same boat. No one then makes any progress because all are being affirmed that everyone else has the same issues. It then lowers the bar for living a godly life, versus encouraging people forward in following Christ.”

Additionally, accountability is difficult because Christians aren’t talking deeply with each other. In another Lifeway Research survey, 75% of Protestant churchgoers say they need other believers to help them to grow in their walk with God, but “65% of Protestant churchgoers say they can walk with God without other believers, with 36% agreeing strongly.”

65% of Protestant churchgoers say they can walk with God without other believers, with 36% agreeing strongly. Click To Tweet

Jao mentions, “As adults out of college, we talk about accountability less also because many of us lack close-knit relationships and the freedom to meet on a regular-enough basis, making accountability difficult.”

Noe also notes the cultural obstacles inherent in telling someone they are wrong. “Students and adults don’t always know how to challenge their own beliefs and thoughts, let alone challenge someone else’s.”

With all these issues, how can churches lead their people to do accountability well?

“I would define ‘accountability’ as the ‘one another’s’ in Scripture. … It’s the full picture of what we’re supposed to be as the body of Christ.” — @ashleychesnut Click To Tweet

“Across the span of my life, ‘accountability’ has produced far more growth than damage, which is a testament to its power, as well as a reminder of the importance of doing it in a healthy way,” says Cobble. “The healthiest accountability relationships I’ve entered into are ones that grow out of personal relationships. They’re formed via expressed mutuality, where we both willingly lay our lives open to the other for open dialogue, honest questioning, humble challenges, and regular encouragement.”

“A lot of churches say, ‘This is a safe place, and we can be vulnerable with each other.’ But the reality is our prayer requests are more about our grandmother’s surgery or our kid’s test than they are about the deeper internal struggles that we’re going through,” says Noe.

Changing that often comes from leadership modeling something different, according to Noe. “Pastors have this pressure to have it all together, but faithful gospel preaching should create a culture where it’s OK to not be OK. In faithful gospel preaching, it’s not pushing toward earning God’s favor; it’s pushing toward understanding that we’re all broken and in need of a Savior.”

"In faithful gospel preaching, it’s not pushing toward earning God’s favor; it’s pushing toward understanding that we’re all broken and in need of a Savior.” — @Bill_Noe Click To Tweet

For Noe, the baked-in humility makes accountability important. “There’s real power in being able to say, ‘I’m not OK. I have something that I need help with,’” he says.

Unfortunately, pastors struggle to practice this in their own lives, which leads many of them out of the ministry. Lifeway Research found 85% of former pastors say they worked hard to protect their image. And 1 in 5 (19%) say during their last pastorate they weren’t meeting at least monthly to openly share their struggles with either their spouse, another pastor, close friend, mentor, lay leaders in the church, another staff member, counselor, or Bible study group in their church.

“If we expect Christians to be accountable to each other, that accountability should begin with the lead pastor, the elders, the worship team, the staff, etc.” remarks Cobble. “Not only does this give the church an example to follow, but it also helps ensure that accountability is life giving and community nurturing.”

“If we expect Christians to be accountable to each other, that accountability should begin with the lead pastor, the elders, the worship team, the staff, etc.” — @TaraLeighCobble Click To Tweet

Chesnut adds, “It’s a discipleship issue. Are we teaching our people to talk about faith matters with the lost and with the saved? And are we teaching them this isn’t just something you do at church, but in every area of your life?”

“For churches, do we train our small group leaders in how to facilitate these kinds of spiritual conversations in a group?” Jao asks. “I suspect most small group leader training is focused on how to welcome people, how to keep in touch with them, and keep them engaged, as opposed to how to ask the deep questions of discipleship.”

Jao suggests a simple worksheet with questions to help train leaders. Use questions such as:

And a follow-up question: “Hey, this seems to be a struggle for you as you’ve told me about this over the last couple of months, that you haven’t been able to do what you want to do. Is this really the most important thing that you want to pursue with Jesus? Or is there something else we should choose that would be more key to help you grow?”

Accountability is needed still in discipleship today. Churches and pastors have an immense task before them to develop leaders who will ask the hard questions and will normalize talking about spiritual matters with each other. “As iron sharpens iron, so one person sharpens another” (Proverbs 27:17), and the church has a great opportunity to foster that among its members. 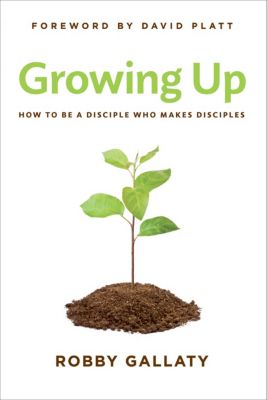