Is Christianity subjective or objective? Is it a religion of experience or of truth?

Christians (and non-Christians) have answered this question differently throughout the centuries. Different personalities and personal bents wire us to answer it differently as individuals. The 2020 Lifeway Research State of Theology Study found that for 54% of Americans, theological beliefs are not a matter of objective truth, but belong in the category of subjective personal opinion.

54% of Americans say theological beliefs are not a matter of objective truth, according to Lifeway Research. Click To Tweet

But if you come from the same theological context as I do, you probably emphasize truth over experience, the objective over the subjective. The great realities of Christianity—the existence of the triune God, the death and resurrection of Jesus for sinners, His future return, etc.—are true whether or not we believe them or have had an experience of them. For this reason, we’re often encouraged to prioritize “faith over feeling.” If the feelings haven’t caught up to the faith, don’t fret—just keep believing and doing the right things!

Some Christians, on the other hand, emphasize experience. Friedrich Schleiermacher, called the “father of modern liberalism,” defined Christianity as “the feeling of absolute dependence.” He and those similarly inclined emphasize the experience of God. Many modern churches—though probably not intentionally influenced by Schleiermacher—carry on his legacy by prioritizing emotion in the Christian life. Worship services lead us to soar with joy and to weep with gratitude, and these feelings compel us to live a life of brotherly love.

But what does the Bible say about this? Are we to prioritize truth or experience, faith or feelings?

The Bible as True Revelation

On the one hand, the Bible is the objectively true revelation of God. This revelation is true regardless of whether we believe it, and regardless of our experience of it. God is God. He is the ultimate reality of all existence. He is the only One who has life in Himself, who does not need anything from anyone, who cannot be added to, who is all-powerful, all-knowing, all-present.

God is the only One who has life in Himself, who does not need anything from anyone, who cannot be added to, who is all-powerful, all-knowing, all-present. — @combstaylor_ Click To Tweet

This triune God, who eternally exists as Father, Son, and Spirit, has revealed Himself in His words, His actions, and finally, in the incarnation of His Son, Jesus Christ. Jesus lived a sinless life, died a substitutionary death for sinners, was raised on the third day, ascended to the right hand of the Father, and will return again to judge the living of the dead. Whether we believe it or not.

Salvation as an Experience

On the other hand, to become a Christian is to have an experience with this God. Salvation does not come from merely assenting to the theological truths outlined above. As James tells us, even the demons believe these things, and they shudder at them (James 2:19).

Salvation is a confrontation with the holy God that moves us from merely believing there is a God to knowing God. — @combstaylor_ Click To Tweet

Jesus Came by Water and Blood

This occurred to me recently while reading 1 John. In chapter 5, John says some things that at first appear confusing: “Jesus Christ—he is the one who came by water and blood, not by water only, but by water and by blood. And the Spirit is the one who testifies, because the Spirit is the truth. For there are three that testify: the Spirit, the water, and the blood—and these three are in agreement. If we accept human testimony, God’s testimony is greater, because it is God’s testimony that he has given about his Son” (1 John 5:6–9).

What is John saying here? I believe he’s talking about the objective fact of Christianity, specifically of the identity of Jesus Christ. Jesus, he is saying, came by water—that is, through His baptism, during which God said, “This is my beloved Son, in whom I am well pleased.” At Christ’s baptism, God bore witness to the fact of Christ’s identity as God’s Son.

And He came by blood—that is, through His death. The death of Jesus Christ was also a testimony of God the Father to the identity of the Son, recognized even by the Roman centurion at the cross, who uttered, “Surely this was the Son of God.”

And after the ascension of Christ, God sent His Spirit, who also bears witness to the identity of Christ as God’s Son. Jesus Himself said of this Spirit, He “will teach you all things and remind you of everything I have told you.”

Truth And Experience Together

What’s the point? Christianity is objectively true. Jesus Christ is God’s Son. He came to earth, died, was raised, and will come again, whether we feel like it’s true or not.

But John doesn’t divorce the objective from the subjective. The two are held together. He picks back up in verse 10, “The one who believes in the Son of God has this testimony in himself… And this is the testimony: God has given us eternal life, and this life is in his Son” (1 John 5:10a, 11). In other words, to be a Christian is indeed to have an experience. But not any experience. We can’t feel whatever we want and call it Christianity, nor can we change the objective, revealed truth of God because it doesn’t align with our feelings. Christianity is an experience bound by the truths revealed in Jesus Christ, the Son of God. It is an experience of Jesus Christ. Indeed, Christianity is to have eternal life, to be in Christ Jesus.

We can't feel whatever we want and call it Christianity, nor can we change the objective, revealed truth of God because it doesn't align with our feelings. — @combstaylor_ Click To Tweet

Are you holding the objective and subjective elements of the faith together? Are your Christianity and leadership held fast by the truths revealed in Christ and in the Word? Have you experienced these truths? Are you still experiencing them? Keep going deeper, leading your church into the objective truths of the Christian faith, and keep going deeper into the subjective experience with God to which these truths point us.

Taylor is a church planting pastor with his wife and daughter in East Nashville. Previously, he served as an associate publisher for B&H Publishing. 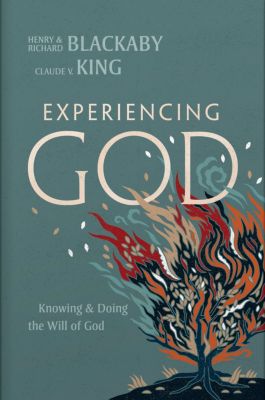 Experiencing God: Knowing and Doing the Will of God