Who’s the main character of Hamlet?

Easy answer. Hamlet, right? The only confusing thing about that question is why I would even ask it. Hamlet is the title character; everyone knows the play is about him.

But what about the Bible? Who’s the main character of Scripture?

A 2016 Lifeway Research study found that more than half of Americans said they had read little or none of the Bible. And more recently, in the 2019 Discipleship Pathway Assessment, only one-third of Protestant churchgoers surveyed said they read the Bible every day.

In the 2019 Discipleship Pathway Assessment, only one-third of Protestant churchgoers surveyed said they read the Bible every day. Click To Tweet

To read literature rightly, one must know who it’s about. If you believed Ophelia was the main character of Hamlet, you might get an interesting perspective, but you would miss out on much of the story surrounding the play’s actual star. Not only that, but you’d leave many sections of the play frustrated. Why? Because you’d be unable to see how what you read connected with the main character, and thus with the work’s overarching storyline.

The Bible is not exempt from this rule of right reading. So, who is it about?

Many of us, explicitly or implicitly, think the Bible is about us. And we read it that way. So, we come to the Bible trying to find ourselves in the story. — @combstaylor_ Click To Tweet

This can be enriching and encouraging when we read certain books of the Bible—like, for example, the book of Proverbs. But, just as if you read Hamlet as though Ophelia was the main character, if you read the Bible as though you’re the main character, you’re going to run into some difficulties. You’ll miss out on much of the beauty surrounding the book’s actual star. And, you’ll leave many chapters, sections, and even entire books frustrated. What could Mathew’s genealogies have to do with you? And are the Old Testament historical narratives supposed to be enriching? And where are the quick tips for a good life in Revelation’s beast and dragon?

Not About Individual Characters

Some of us, on the other hand, read the Bible as if there were really no central character, but rather a host of important characters. The Bible is about Adam and Eve, Noah, Abraham, Joseph, Moses, Ruth, David, Daniel, Esther, Peter, and Paul. Right? When we assume this, we come to the Bible looking for interesting historical tidbits and perhaps moral exemplars we can imitate.

Again, this can be enriching and encouraging. Seeing how God kept His promises to Abraham, how Peter grew in spiritual leadership, how Esther acted with courage and faith, how Daniel stood by his convictions—these can inspire new depths of faith and obedience in us. But again, when we read the Bible this way, we run into some difficulties. After all, all of these folks died—what makes their stories better than stories about Alexander the Great or Napoleon, Abraham Lincoln or Martin Luther King, Jr., or, for that matter, Hamlet? And—perhaps more poignantly—what happens when these moral exemplars are utterly … immoral? When Abraham throws his wife under the bus to save his own skin? When Moses murders a man? When David commits adultery and covers it up with murder? When Peter—even after Pentecost—shows ethnic partiality?

There is another option.

It’s true that you and I are part of the story the Bible tells. Paul says twice in 1 Corinthians 10, referring to events in the Old Testament, “these things took place as examples for us,” (1 Corinthians 10:6) and “these things happened to them as our examples, and they are written for our instruction” (1 Corinthians 10:11). And it’s true that the humans in the biblical narratives were a major part of the story as well. But it’s even truer, at a deeper, spiritual level, that the whole Bible—all of it—is about Jesus Christ.

It's true that the human beings in the biblical narratives were a major part of the story as well. But it's even truer, at a deeper, spiritual level, that the whole Bible—all of it—is about Jesus. — @combstaylor_ Click To Tweet

Jesus tells us this Himself.

After His resurrection, Jesus spoke to this even more clearly. In Luke 24, He appeared, in His resurrected body, to two dejected disciples. They were walking and talking about Jesus’s death, and their disappointed hopes about Him as the Messiah. Jesus appeared—but didn’t reveal His identity to them. After they explained that they were upset because the man they thought was the Messiah died, Jesus said to them, “‘How foolish you are, and how slow to believe all that the prophets have spoken! Wasn’t it necessary for the Messiah to suffer these things and enter into his glory?’ Then beginning with Moses and all the Prophets, he interpreted for them the things concerning himself in all the Scriptures” (Luke 24:25-27).

“Moses and all the prophets” is shorthand for the entire Old Testament. The point Jesus was making to these two disciples? The entire Bible is about Me.

Read and Teach the Bible Looking for Jesus

Jesus is the main character of the Bible, and this changes how we read and teach it. Sometimes things point forward to Him—for example, the Old Testament sacrificial system points forward to Him as the sufficient sacrifice for the sins of the world. Sometimes, His presence is ironically seen in His absence—as in the book of Judges, when “there was no king in the land, and everyone did what was right in his own eyes” (Judges 21:25). Other times it’s more obvious, like the Gospels, which tell of His life on earth, or the New Testament epistles, which explain the gospel and its application to our lives.

When we read and teach the Bible looking for Jesus, we are not just looking for mere inspiration, nor for a history lesson, nor for quick tips about how to have a better life. Rather, we are looking for transformation.

When we come to the text believing that Christ is its main character, the Spirit illumines our minds and hearts so that we see Christ on the pages of our Bibles. As we do, we are transformed, made to reflect Christ more and more.

When we approach the Scriptures like this for ourselves and for our congregants, we see that Bible reading is no dreary, dull duty that we’d rather not have to do at all. Rather, it is a glorious, soul-nourishing, life-transforming vision of the Son of God, with the help of the Spirit of God, to the praise of God the Father.

But this only happens when we know who the main character is.

Taylor is a church planting pastor with his wife and daughter in East Nashville. Previously, he served as an associate publisher for B&H Publishing. 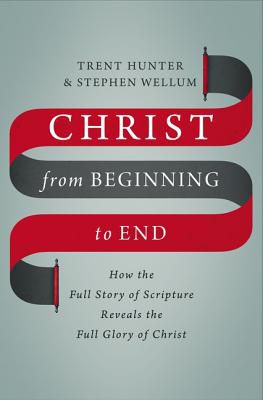 Christ from Beginning to End: How the Full Story of Scripture Reveals the Full Glory of Christ