The book and later movie, Moneyball, tells the true story of the Oakland A’s baseball team and their general manager, Billy Beane, who came to a crossroads in the way the team had to approach Major League Baseball. At that time, the A’s had a minuscule payroll compared to the large market clubs, and things were only getting more lopsided. The bigger clubs had more and more money and therefore could buy more and more players. Beane had to find a way to manufacture wins with his limited resources.

Enter Peter Brandt, a young baseball executive who proposed an entirely new approach at the time. According to Brandt, all of baseball was making a fundamental mistake in their thinking about the game. Teams were focused on paying the best players, but Brandt claimed that using data, the A’s could instead focus on paying for wins and runs. The result was a roster of no-name players who had the unique ability to get on base better than most, and an unlikely playoff run as a result.

A Lifeway Research survey discovered that 65% of Protestant churchgoers say they can walk with God without other believers, with 36% agreeing strongly. Click To Tweet

Now there are all kinds of lessons from this paradigm-shifting season—lessons about leadership, about data, about innovation, and creativity. But there is also a lesson about team.

The A’s were focused not on finding the players who would win batting titles or home-run records or strike out tallies; they were solely focused on what an individual player could contribute to the team in order to win. It was, in many ways, a “we” mentality rather than an “I” mentality in which each player knew their particular role.

We seldom have a “we” mentality, even when we should. Even when we are part of a team, part of an organization, contributing to a greater goal, we often still think in terms of “I”—even in the church, the one place in which we should most have a “we” mentality. A Lifeway Research survey discovered that 65% of Protestant churchgoers say they can walk with God without other believers, with 36% agreeing strongly. Also, less than half (47%) of Protestant churchgoers told Lifeway Research they “intentionally spend time with other believers in order to help them grow in their faith.”

Less than half (47%) of Protestant churchgoers told Lifeway Research they “intentionally spend time with other believers in order to help them grow in their faith.” Click To Tweet

But the Bible largely treats us with a “we” mentality. Though it’s true Scripture addresses us as individuals, much more often does it address the entire people of God. Here is one specific example:

“But you are a chosen people, a royal priesthood, a holy nation, God’s special possession, that you may declare the praises of him who called you out of darkness into his wonderful light. Once you were not a people, but now you are the people of God; once you had not received mercy, but now you have received mercy” (1 Peter 2:9-10).

Peter here is addressing the church. He is stating their corporate identity. He is not answering the question of who “you” are as individuals, but instead who “you” are collectively. It makes me wonder, in light of how much we have the “I” mentality, how things would be different if we thought in terms of “us” more. At least three effects come to mind:

1. We would bear with one another.

“Be completely humble and gentle; be patient, bearing with one another in love. Make every effort to keep the unity of the Spirit through the bond of peace. There is one body and one Spirit, just as you were called to one hope when you were called; one Lord, one faith, one baptism; one God and Father of all, who is over all and through all and in all” (Ephesians 4:2-6).

What does it mean to bear with one another? It doesn’t mean just putting up with someone else; instead, it means recognizing that every single person we interact with on a daily basis is bearing their own burden. They have struggles, anxieties, priorities, fears—just like we do. And when you have all those things, you tend to think only of yourself. But a “we” mentality makes us bear with one another; it makes us patient with those around us, making allowances for them, and considering them above ourselves.

2. We would confess to one another.

“Therefore confess your sins to each other and pray for each other so that you may be healed. The prayer of a righteous person is powerful and effective” (James 5:16).

Often times it is easier to receive a confession rather than give one; to bear a burden rather than relinquish one to be borne by someone else. To receive someone’s authentic confession—be it a confession of sin, of fear, of doubt, of whatever—requires that the other person trust me. It actually does not require that I trust them. But the other way around? Well, that’s more difficult because I must humble myself under the weight of that burden that is too great for one person to carry. With a “we” mentality, each of us recognizes that the burdens we have in our personal lives are meant to be communally lifted. We recognize we are in each other’s lives as vehicles of healing.

With a “we” mentality, each of us recognizes that the burdens we have in our personal lives are meant to be communally lifted. — @_MichaelKelley Click To Tweet

3. We would feel with one another.

Oh, how easy it is to keep each other at an arm’s distance. To acknowledge someone else’s great joys or great sadness, and yet not really feel it. Perhaps that’s because of our own insecurity—we find it difficult to rejoice with someone else because we feel slighted because things have gone well for them. And we similarly find it difficult to truly weep with someone else because doing so allows into our minds the possibility that we, too, will someday be the one weeping. And yet, all of this distance has at its source the “I” mentality. Not the “we.”

If you are a Christian, you have a “we” identity in as much as a “me” identity. Don’t miss the blessing of living in the “we.” — @_MichaelKelley Click To Tweet

The “we” feels. Laughs. Cries. Celebrates. Mourns. Together. If you are a Christian, then you are a child of God, but that’s not all you are. You have a “we” identity in as much as a “me” identity. Don’t miss the blessing of living in the “we.”

Michael is the former vice president of church ministries for Lifeway Christian Resources.

A version of this article originally appeared at michaelkelley.co. 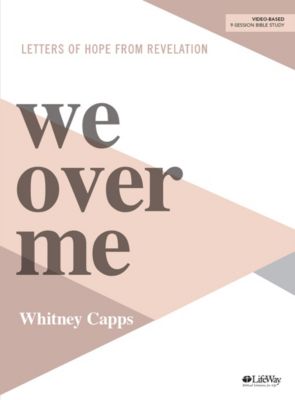 We Over Me Bible Study