For the first time, archaeologists have unearthed evidence for an earthquake Old Testament prophets mentioned and compared to end times events.

Amos mentions an earthquake that struck Jerusalem during the 8th century. Hundreds of years later, Zechariah references the same event. Previous evidence confirmed an earthquake at that time, but new excavations led by the Israel Antiquities Authority (IAA) found a layer of ruins dating back to Amos’s day.

“Recent excavations revealed a layer of destruction from when the building’s walls collapsed, including a row of shattered vessels, bowls, lamps, cooking utensils, smashed storage, and storage jars,” according to IAA‘s announcement.

Many types of destructive events can leave archaeological evidence, so researchers investigated for other possible causes. In order to “prove that this doesn’t involve one building that sustained an isolated trauma, we compared it to other sites, both in Jerusalem and at other places where we also see this layer, so that we can make the connection and say that this isn’t an isolated event but rather something more widespread,” IAA archaeologist Joe Uziel told Haaretz.

Just as modern writers use presidential terms or well-known events, like 9/11 or the COVID-19 pandemic, to help contextualize the circumstances of their writing, ancient writers did as well. Prophets often begin their biblical books by mentioning the kings who ruled during their time, as Amos did, pointing to Uzziah as king of Judah and Jeroboam as king of Israel. However, he also says his prophecy came “two years before the earthquake” (Amos 1:1). This would mean the earthquake occurred in the mid to late 700s BC.

Years later, in the early 500s BC, Zechariah drew on that well known event to describe a coming “day of the Lord” in Zechariah 14. On the day the Lord’s feet stand on the Mount of Olives, the mountain will split and form a huge valley and people “will flee as you fled from the earthquake in the days of Uzziah king of Judah” (Zechariah 14:5). “Then the Lord my God will come and all the holy ones with Him,” writes Zechariah.

This type of corroborating evidence, as with the time the terrorist group ISIS accidentally confirmed an Old Testament narrative, provides help when dealing with those skeptical of the Bible.

More than half of Americans (53%) say they’ve read only some stories or passages from the Bible at most, according to a 2016 Lifeway Research study. While 52% describe the Bible as a good source of morals, only 38% say it is a historical account and only 36% describe Scripture as true. Meanwhile, 14% specifically say it was outdated.

The Lifeway Research 2020 State of Theology study found almost half of Americans (48%) say the Bible, like all sacred writings, contains helpful accounts of ancient myths but is not literally true. More than 4 in 10 (42%) do not believe the Bible is 100% accurate in all that it teaches, while a third (34%) say modern science disproves the Bible. Non-Christians and the unchurched are more likely to doubt the veracity of the Bible.

More than 4 in 10 Americans (42%) do not believe the Bible is 100% accurate in all that it teaches, while a third (34%) say modern science disproves the Bible. Click To Tweet

Even among Protestant churchgoers, 30% say they accept some truths from the Bible, but other biblical truths just don’t fit what they believe, according to a 2019 Lifeway Research study.

These types of archaeological discoveries give confidence to believers and evidence to consider for the non-Christian internally debating whether or not they can trust what the Bible says about history, about itself, and about Jesus. 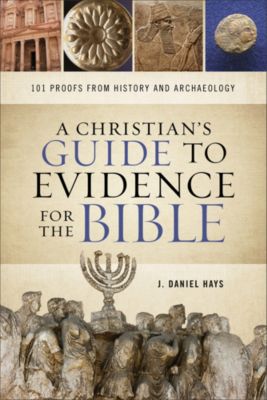 A Christian’s Guide to Evidence for the Bible