According to a study from Gallup, 40% of adults from 115 countries globally said they had experienced worry or stress, and about one in four or more experienced sadness (27%) or anger (24%) in 2020. From already high numbers of 2019, anger rose two percentage points.

The world has been experiencing a record high of negative emotions and stressors. You don’t have to look far to see the truth of this, from social media sites like Twitter and Facebook to talk shows and podcasts. We live in a world with angry people saying and doing angry things. And unfortunately, being Christians doesn’t make us an exception. Somehow, we have lost our understanding of gentleness in a world of hot-takes and witty retorts.

We have lost our understanding of gentleness in a world of hot-takes and witty retorts. — @SkylarSpradlin Click To Tweet

Have you ever considered the nature of gentleness? The Bible refers to gentleness in several places. Our Lord describes Himself as gentle (Matthew 11:29). The fruit of the Holy Spirit that is to be produced in the life of all believers includes gentleness (Galatians 6:1; Ephesians 4:1-2; 1 Peter 3:15). Pastors are told to be gentle, even as they deal with opposition (2 Timothy 2:24-25; Titus 3:2; 1 Timothy 6:11). The apostle Paul even delighted in his gentle dealing with the Thessalonian church (1 Thessalonians 2:7). Christians are also instructed that heavenly wisdom is not just being open to reason, but it is marked with gentleness (James 3:17)

There are numerous references that highlight the gentle nature and characteristics of the people of God. Indeed, the Bible teaches us that when the world is full of bitterness, hatred, and grumbling, Christians are to be marked with the gentleness of Christ. But what is this gentleness that should adorn our character and actions?

In the world’s eyes, gentleness is seen as weakness. Unfortunately, many Christians today have adopted the same perspective. But for Jesus, the One to whom all authority in heaven and on earth has been given (Matthew 11:27a), gentleness is a virtue to be shared that invites others to His warmth and love. In fact, it is in the span of two verses (Matthew 11:27-29) that He highlights His sovereign power and His gentle Spirit.

The Bible teaches us that when the world is full of bitterness, hatred, and grumbling, Christians are to be marked with the gentleness of Christ. — @SkylarSpradlin Click To Tweet

This forces us to consider our definition of gentleness in the light of the Lord’s life and actions. We know the Lord has no contradiction in His nature or character. This allows us to see Him live out gentleness in a variety of situations.

Such moments help us conclude that being gentle is not being a pushover, nor is it compromising on truth for the sake of peace. Rather, one might even argue that turning a blind eye to rebellion against God is not only the wrong definition of gentleness, but may even be violent, as the consequences of sin wreak havoc on the soul.

Still, seeing what gentleness is not doesn’t necessarily tell us what gentleness actually is. Paul’s reference to himself as being “gentle…. like a nursing mother taking care of her own children” (1 Thessalonians 2:7) helps us in our understanding.

A nursing mother is not only warm, tender, and patient; she is also protective, instructs her child in what is right, and cares for the child’s present and future well-being. Yet, such willingness to do what is right and needed doesn’t diminish the mother’s patient and calm instruction and demeanor. In other words, gentleness doesn’t reduce her protection to sentimentality; it only presents her protection, instruction, and provision in warm and tender ways.

Far from rendering a Christian as passive and tolerant of evil, gentleness determines how we engage in all of these areas. — @SkylarSpradlin Click To Tweet

The danger of a lack of gentleness was revealed in a Lifeway Research study prior to the 2020 election wherein most Christians admitted to wanting civility in regards to political matters, and yet were OK with some form of harshness. According to the research, “Around a quarter (26%) say they tend to believe insulting personal remarks made by political leaders who share their ideology toward opponents are justified.” Where the world might engage in politics or other subjects with hostility, violence, resentment, or forcefulness, God’s people need to deal with sin, truth, and spiritual warfare with the tender, gracious, and compassionate kindness of Christ.

As Christians who are called to be gentle, we do not turn a blind eye to sin, we do not stay silent on matters of truth, we do not compromise on biblical positions, and we do not cease our warring against our spiritual adversary. To the contrary, far from rendering a Christian as passive and tolerant of evil, gentleness determines how we engage in all of these areas.

We rise above knee-jerk reactions. By God’s Spirit indwelling us, we transcend worldly responses. By the grace of Christ, we do not respond in our flesh. Instead, we respond with the wisdom of heaven that is “pure, then peaceable, gentle, open to reason, full of mercy and good fruits, impartial and sincere” (James 3:17).

Therefore, as you engage with others, even with the world around you that is seriously opposed to Christianity, do it with the gentleness of Christ. Far from being a sign of weakness, gentleness is the gateway to greatness. For gentleness is a hallmark of Christ. So it should be for His people as well. 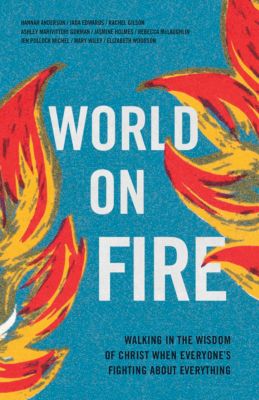 World on Fire: Walking in the Wisdom of Christ When Everyone’s Fighting About Everything