A new study published in Social Psychological and Personality Science shows that the number one predictive factor for an American child becoming an atheist is growing up in a home with little religion or religious activity.

For some, this might seem intuitive at first glance, but the disconnect comes when atheists are asked why they believe what they believe. Many are less prone to say they are an atheist because of their parental influence and more respond that they are so because they have looked at reason and science.

For the study, Will Gervais, a senior lecturer in psychology at Brunel University in London, and his colleagues surveyed a sample of 1,417 U.S. residents.

“A lot of people (atheists in particular) like to talk about how atheism comes from rational, effortful thought. This work joins other recent surveys in finding that this isn’t too accurate,” Gervais told PsyPost in a recent article. “Our best estimate is that atheism mostly comes down to cultural learning—specific cues we’re exposed to growing up about how sincerely those around us believe in God. Once those cultural inputs are accounted for, individual differences in more analytic cognitive reflection predict a little bit of surface variation, but it’s a pretty small piece of the puzzle.”

“So many people seem really convinced that they’re atheists because they’re super rational and science minded. But large-scale quantitative research basically never shows that to be a major predictor of atheism.” Click To Tweet

What Gervais’ research has exposed is that family upbringing and early exposure to belief or disbelief has a great influence on us. Our cultural context plays a large part in our beliefs. For atheists who sometimes claim superior scientific reasoning or analytical thought as the basis for their faith in no God, this new research reveals otherwise.

“Doing this research and also talking to atheist groups, I’m always struck at the mismatch between people’s narratives about their atheism and the research,” added Gervais. “So many people seem really convinced that they’re atheists because they’re super rational and science minded. But large-scale quantitative research basically never shows that to be a major predictor of atheism.”

Relationships With and Exposure to Believers

What can we take away from this research as believers?

Perhaps we can say that our relationships with others can expose them to religious activity and religious moral character which can influence a person’s belief in God. With this type of research to back that position, it’s clear that evangelism, even simply by contact or observance, can make a difference in someone’s life for the first step towards trusting in Christ.

For children and teens especially, consistent Christian presence in their life can make a big impact towards them continuing to walk with Christ and in the church. This is the cultural context the research reveals. As we minister to families through children’s ministry, youth ministry, VBS, and other activities, we can be assured that these moments of contact make a difference in their lives.

For children and teens especially, consistent Christian presence in their life can make a big impact towards them continuing to walk with Christ and in the church. — Y Bonesteele Click To Tweet

Thus, hopefully, we are intentionally asking our adult leaders and volunteers to make contact with our kids and teens, whether through simple greetings or small-talk conversations, understanding that all these small moments collectively make an impact.

Prioritizing Kids and Teens Not in the Church

There is always much to be done with kids in families that already go to our churches. But are we also looking at opportunities to serve and minister to those kids and teens from families that don’t go to church at all?

Urban ministries tend to do this much better than suburban ministries, as they realize parents with low-income or two-income families sometimes don’t have the time or desire to drive their kids to a church event but are open to their kids going.

Some urban ministries have buses to pick up kids or a carpool schedule from leaders. That way, they can pick up kids and teens to church for Sunday service, or midweek youth group, or afterschool tutoring at the church. Urban ministries have tried to eliminate the barriers that could prevent a student from a church activity. Churches in other contexts could see how to apply some of those ideas to their circumstances.

For the urban or suburban or rural church, as pastors and leaders, we need to continue to think about how we can achieve more points of contact with students yet to believe. Spending time on the sports field, at the school campus, or at popular hangouts are as much part of our ministry as times in our church building.

Spending time on the sports field, at the school campus, or at popular hangouts are as much part of kid and student ministry as times in our church building. Click To Tweet

And as much as we want to limit our time on social media, for teens and Gen Z, these are additional opportunities to engage with them, especially for those not in the church. Seeing social media as a catalyst or starting points for conversations and relationship-building is the key though, realizing that in-person contact is the eventual goal.

Kids and teens want the same things adults do: people who accept them, people they can confide in, people they can rely on, people that can model a good, joyful life. They can either try to find someone like that through the latest social media celebrity, a teacher, coach, or family member who doesn’t live like Jesus. Or they can find it in us, leaders and pastors who are living the discipleship journey with joy.

At the end of the day, we know Christianity to be true based on the logical reasoning for the existence of God and the validity of the Bible and all that’s within it. Atheists can claim higher intellect, but it’s just not true.

We’re also reminded of the powerful influence of a consistent trusted relationship in our upbringing, in the way we believe or not believe. Though we know God is the One opening hearts and minds to receive Him, we stay passionate on our part to partner with Him to reach the future generation with the hope of the gospel, mainly through our faithful presence in their lives. 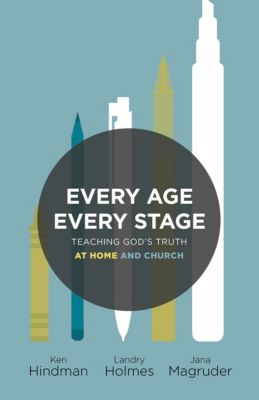 Every Age, Every Stage: Teaching God’s Truth at Home and Church