Churches receive the vast majority of their funding from individuals. The Faith Communities Today report says 85% of a typical congregation income comes from these types of contributions. Additionally, half of Protestant pastors say the current economy is having an impact on their church, according to a Lifeway Research study.

Because of this, the finances of American consumers and the national economic conditions are worth watching. With so much movement in the U.S. economy coming out of the 2020 recession, six specific factors will directly affect churches in 2022.

In the near-term, consumer debt does not appear to be a problem. Mortgage debt has been on the rise as many have bought new homes taking advantage of low interest rates. While credit card debt has recently been rising, balances remain lower than they had been at the end of 2019.

Most consumers benefited from stimulus checks in 2020 that provided a couple of spikes in disposable income and higher savings rates. This temporarily helped some through financially hard times and gave others a sense of financial security they may not have had in some time. By May of 2021, these boosts had ended, but the extra cushion provided may help many consumers for several months.

The employment rate is the number of people who have a job as a percentage of the working-age population. Before COVID the employment rate was around 61%. The COVID-19 recession pushed this down to 51.3% in April 2020. By the fall of 2021 it had rebounded quickly to 57% and has been slowly rising from that point. As of September 2021, it stands at 58.7%. The unemployment rate has dropped to 4.8%. Among Americans aged 16 and older, there are 1.7% fewer people in the labor force today than February 2020. This explains why so many businesses have had difficulty hiring in recent months.

While COVID caused a sharp drop in wages earned, these rebounded by the end of 2020. Wages have been rising since April 2021, but with plenty of volatility. Personal income was maintained in 2020 largely due to stimulus checks from the government. The final stimulus payment in early 2021 helped households this year, and by May 2021 personal income has continued to be higher than the same month in 2020. These losses and gains have not been even across the country, however.

Rising wages, higher energy costs, and inflated transportation costs in the disrupted supply chain have led to increased prices for goods. Consumers are paying more for the things they typically buy. The consumer price index in October showed a 6.2% increase over a year prior. Some of the prices that are rising are for goods churches purchase. But the index really is measuring the impact on consumers. For most months in 2021 consumers earned less disposable income after inflation than they did that same month in 2021 (with a notable exception in March).

Inflation has widespread impact since many things are tied to measures of inflation. The inflation experienced in 2021 means Social Security recipients will receive more in 2022. The cost-of-living adjustment will add 5.9% to payments in the new year. This is the largest increase since 1982. By comparison, the increase in 2021 was 1.3%.

How these economic forces will impact churches

Two biblical principles are consistently seen in modern giving as people give first fruits and offerings. Some churchgoers faithfully give to God first. As long as they have income, they will give the first portion of it. We also see churchgoers giving offerings. This can be in addition to their regular tithes, or some may only give when they feel comfortable doing so.

Both types of giving are easier when incomes grow and when disposable income increases. While incomes are growing, real wages adjusted for inflation are not compared to a year ago. Differences will also exist depending on the financial situation of the local area and the vocational makeup of churchgoers in each congregation.

Overall, 2022 should start out with positive economic dynamics for churches. Many churchgoers were financially stable when stimulus checks arrived. While most of those funds have been spent, these households should still enter 2022 better than they were before COVID. The strong labor market benefits those at every income level. When almost every church member is working, that benefits a church’s finances.

As 2022 continues, inflation will take its toll on churches directly through higher prices and indirectly through many givers reducing what they give. However, the cost-of-living adjustment received by Social Security recipients should provide enough positive impact to make it a positive year. While their income is often low, Social Security recipients are often the most faithful givers in church.

As 2021 winds down, American churches overall are in a stable financial position. One of the best indicators of the finances of a church is whether their income is above or below the prior year. By this measure, churches are in the calm after the storm of 2020, according to the latest Lifeway Research study. The 4 in 10 (42%) churches with income running the same as the previous year is the highest since 2010, which coincidentally was the year after the end of the “great recession.”

The 4 in 10 (42%) churches with income running the same as the previous year is the highest since 2010, which coincidentally was the year after the end of the “great recession.” — @smcconn Click To Tweet

Less than a third of churches (31%) saw growth in their offerings in 2021, which is below the norm. But less than a quarter of churches (22%) received less offering income than in the prior year. This group that is struggling is similar to the long-term average of 23%.

As we continue to endure a global pandemic, it often seems like there are more economic uncertainties than things we can plan on with any confidence. Some of the short-term uncertainties include problems in the supply chain that are disrupting commerce, shortages of workers that reduce store hours and productivity, continuing inflation risks, and the possibility that more outbreaks of the coronavirus could disrupt things again.

While it is wise to be aware of our current economic context and to make plans, we must entrust those plans to the Lord and acknowledge He is in control of finances and everything else. — @smcconn Click To Tweet

One of the long-term uncertainties is what impact increased government and corporate debt will have on economies. Historically, economic output is noticeably hampered when total credit market debt is more than 320% of gross domestic product. The U.S. exceeded that level before the sharp debt increases that occurred during COVID. When interest rates start to rise, which is not expected for several quarters, this will force more spending on debt than other productive uses of those dollars.

The Bible warns us not to talk like we control everything going on around us (James 4:13-15). We don’t. While it is wise to be aware of our current context and to make plans, we must entrust those plans to the Lord and acknowledge He is in control of finances and everything else. 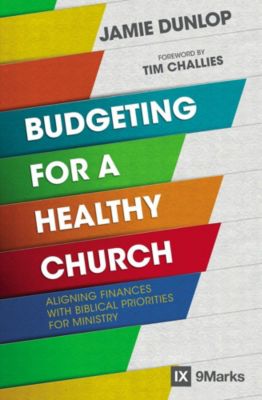 Budgeting For A Healthy Church: Aligning Finances with Biblical Priorities for Ministry