The most recent Gallup study found a slight increase in the percentage of Americans who identify as lesbian, gay, bisexual, transgender, or something other than straight or heterosexual, climbing from 5.6% in 2020 to 7.1% in 2021. Since 2012, when Gallup first began asking the question, LGBTQ identification has risen slowly but steadily from 3.5%.

The number of those identifying as non-straight has remained relatively steady and low among Generation X (4.2% currently), baby boomers (2.6%), and traditionalists (0.8%). Among younger generations, however, significant spikes have occurred. Today, 10.5% of millennial adults identify as LGBTQ, whereas 5.8% did so 2017.

1 in 5 Gen Z young adults (20.8%) identifies as something other than straight or heterosexual, according to Gallup. Click To Tweet

The increase is even more pronounced among Generation Z adults. In 2017, 10.5% said they were LGBTQ. Today, that number has almost doubled to 20.8%, meaning 1 in 5 young adults identifies as something other than straight or heterosexual.

“There’s a correlation between cultural beliefs and behaviors,” said Katie Fruge, director of the Center for Cultural Engagement and the Christian Life Commission at the Baptist General Convention of Texas. “As the majority of American culture has shifted opinions on LGBTQ issues, a predictable outcome would be an increase of individuals who identify on that spectrum. This, while not the only reason, is a significant factor.”

Sean McDowell, speaker and author of Chasing Love, says the rapid increase in LGBTQ identification is likely due to young people feeling more comfortable sharing than in previous generations, but he also feels that explanation alone seems insufficient. “Perhaps the biggest reason is that the cultural narrative has shifted so radically in a pro-LGBTQ direction,” he said.

This rapidly shifting cultural environment can be challenging for many church leaders and student ministers, many of whom grew up among generations mostly devoid of openly LGBTQ-identifying individuals. Regardless of their lack of firsthand experience with these conversations, church leaders must avoid perpetuating the idea that Christians and LGBTQ persons are enemies, says Ben Trueblood, director of student ministry at Lifeway. “We can’t allow that to be the narrative,” he said. “We are to be a people of love because Jesus is, and repeatedly, we see evidence of Jesus putting Himself in situations where He could love people.”

Jesus didn't shy away from addressing a person's sin, but it was always on a foundation of love and compassion for a person rather than a desire to just be right. — @bentrueblood Click To Tweet

This doesn’t mean shying away from addressing sin, Trueblood says, but that must happen from a “foundation of love and compassion for a person rather than a desire to be right. Far too often in today’s Christian culture, we just want to be right rather than loving and compassionate.”

Young women are especially in need of love and compassion today, says Fruge. Women (9.5%) are more likely than men (5.4%) to identify as LGBTQ, according to Gallup. “Young girls are barraged daily with mixed messages about sexuality, gender, and identity, so their struggles and questions are reasonable,” she said. “As believers, we need to allow our young girls to ask tough and valid questions about identity but provide answers that affirm their identity in Christ—fearfully and wonderfully made.”

We need to allow our young girls to ask tough and valid questions about identity but provide answers that affirm their identity in Christ—fearfully and wonderfully made. — @KFruge Click To Tweet

Student ministers and church leaders having those difficult conversations in a loving way is a must, Trueblood says. “Many churches avoid this topic entirely or are so heavy-handed with a right versus wrong verdict they leave no room for conversation,” he said. “Students in this generation want to have real conversations about the real issues in their culture.”

McDowell believes churches can’t wait until teenagers reach high school to broach the subject. “As long as it’s done wisely, the church should address issues of gender and sexuality in junior high or before,” he said.

Trueblood says churches can no longer simply tell students what to believe and expect that to stick. “Instead, student ministries need to create environments where conversations can happen, issues can be explored, and leaders guide students through God’s Word, helping them to see the truth on their own rather than just giving them the answers right away,” he said. “As ministries do this, they’re equipping students to look for answers in God’s Word on their own and teaching them how to develop a biblical filter for all of life.”

Student leaders need to show students how to have genuine conversations in which people feel heard. — @Sean_McDowell Click To Tweet

But students won’t be having these conversations in a church context only. Leaders must prepare parents as they speak with their children and students as they talk with their friends, some of who may identify as LGBTQ.

McDowell says leaders must model for students what those healthy discussions look like. “They need to show students how to have genuine conversations in which people feel heard,” he said. “Student leaders can also show examples of healthy dialogue in which people discuss these issues graciously.”

Churches should also be enabling parents to talk with their students about issues of sexuality and gender. “One of the most impactful things a student ministry, or a church at large, can do for parents is help them to open up lines of communication with their kids,” said Trueblood.

One of the most impactful things a student ministry, or a church at large, can do for parents is help them to open up lines of communication with their kids. — @bentrueblood Click To Tweet

“Many families don’t have spiritual conversations or conversations about issues their kids are dealing with, and helping parents step into those situations can begin to build a pattern where homes are places for honest, difficult, and sometimes awkward conversations for the glory of God.”

One way to empower parents to have these conversations is to provide them with useful resources. They are hungry for such things, McDowell said. “Host seminars to equip parents and offer simple practical resources they can use in their families.”

Without compromising the truth of Scripture, churches should encourage open and honest dialogue with students about identity, gender, and sexual orientation in a loving way. — @KFruge Click To Tweet

Regardless of the specifics, Fruge says this is an issue churches must take seriously as they work to provide a biblical option for students between condoning and condemning. “Without compromising the truth of Scripture, encourage open and honest dialogue about identity, gender, and sexual orientation in a loving way.” 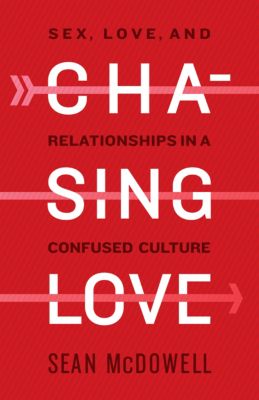 Chasing Love: Sex, Love, and Relationships in a Confused Culture