The Bible talks a lot about generational faith. But a father’s faith doesn’t automatically become his child’s faith.

It was 1971, and a twenty-year-old young man—just starting his apprenticeship as a plumber, living with his sister, escaping a broken and chaotic homelife—walked forward at a Billy Graham Crusade at McCormick Place in Chicago. That young man was my father. In that moment, he found Jesus, and a family that had very little interaction with Christianity was reborn.

In my office, I have a black and white photograph of that night in Chicago. I often look at that crowd and imagine my father in there listening to the words of the evangelist. It’s the simple gospel message that calls sinners to repentance, that calls lost men home. While I believe the Spirit sovereignly woos each prodigal’s heart, I owe much to the decision Billy Graham made to host a crusade in that town, on that night. I owe much to his choice to center his message, delivered to a world recently troubled by war and social unrest, on the simple gospel message that Jesus Christ has come into the world to seek and save the lost.

My father’s faith became my faith and, I hope, the faith of my own children. Dad was a silent witness. He got up every morning before the sun to read his Bible and took us to church three times a week. He sheepishly (but effectively) sought gospel conversations on the job site and served our family faithfully.

The Bible talks a lot about generational faith—from the admonitions of Moses in Deuteronomy to the words of the psalmists to the warnings of the prophets to the humble faith passed down from Eunice and Lois to Timothy. But this is not an automatic transaction, as those of us privileged to be fathers understand. It’s more like a stumbling attempt to pass a slippery baton, hoping the Spirit of God uses our best efforts to ignite a fresh wind in the souls of our children.

The idea of a generational faith can feel like a stumbling attempt to pass a slippery baton, hoping the Spirit of God uses our best efforts to ignite a fresh wind in the souls of our children. — @dandarling Click To Tweet

Fathers play an important role in spiritual formation. Yet we may be in a cultural moment when fathers are least present in the home and much less intentional about creating environments for faith to flourish. So, what can churches do to evangelize, disciple, and equip fathers in this important role?

There’s a good possibility many congregants of your church either had a difficult or nonexistent experience with their father. Some may not even know who their dad is. And whether they acknowledge it or not, they’re searching for surrogate dads—men who can fill the void. Some put their energies into their careers, seeking validation and affirmation from the title on their email signatures. Others drown their sorrows in substances or hobbies, shrinking back from responsibilities to their families. Still, there are good folks who soldier on, burying the deep scars inflicted on them by an absent father. Wracked by insecurities, they never find peace and contentment.

Many in our churches never experienced the love and affirmation of a good father as I did. Many are looking for a father figure, shepherds who can help point them to the love of their Heavenly Father. They need to understand God was fathering them in the gaps. He was caring for and protecting them and providing salvation in Christ. He’s the Father who will never leave them. God is the Father who loves them for who they are, not for who they could be or should be.

Like Barnabas to Paul and Paul to Timothy, a pastor can set the men in their midst on a positive spiritual trajectory. — @dandarling Click To Tweet

Men walking into church on Sunday who never experienced a good father, lack that example to follow. They don’t have a template by which to shape their own fathering experience. We can’t assume they understand how to be good dads. Faithful manhood doesn’t happen by osmosis.

Even those of us who grew up in Christian homes with good fathers need biblical guidance on raising our families. Many men are tempted to shrink back from spiritual authority in the home. In so doing, they often leave the training and instruction of children to their overwhelmed wives. Or the opposite is true as men are tempted to see the home merely as the opportunity to exercise power and control, the satiating of their appetites and furtherance of their careers. Both are departures from the Christian vision of spiritual leadership.

So, pastors shouldn’t hesitate to equip men to be fathers, to stir up this generation with Scripture and prayer, intentionally discipling them in the way of the Lord. This takes investment and effort. We can’t assume men walking into our churches understand what the Bible says about fatherhood. Many are grasping for answers, not confident in their ability to be the kind of men their wives and children need them to be.

When pastors challenge men in their churches—especially on Father’s Day—there can be a temptation to call them up to responsibility by insulting them. So, on Mother’s Day, we honor moms, and on Father’s Day, we yell at dads. Or, frustrated by the lack of men in attendance, we take it out on the dads who did manage to corral their families on a Sunday morning and stumble into the church.

The dads who in your church, the ones who are working to support their families, who are trying to lead their families spiritually, need your affirmation, your encouragement. — @dandarling Click To Tweet

The dads who are present in your church, the dads who care, the ones who are working to support their families, who are trying to lead their families spiritually, need your affirmation, your encouragement. Most dads won’t admit this, but deep down we feel inadequate for the task ahead of us. Men often live in a culture that tells them they are worthless, that they are toxic or part of the problem.

But the church should be one place where they hear encouragement, where older men tell them they can do this—that God has equipped them and His Spirit has empowered them to live for Jesus and lead well. You might imagine Sundays as the huddle where a coach writes up the plays and lets them know they can get into the game and make a difference. Pastors, by your words, actions, and preaching, you can stir up the spiritual affections of the fathers in your church and elevate them toward Christlikeness.

There is a crisis of fatherhood in our communities, but your church can be an oasis, where the fatherless find hope in their Heavenly Father and where men are equipped and elevated into their God-given responsibilities.

Dan is the director of the Land Center for Cultural Engagement at Southwestern Seminary. He is the bestselling author of several books, including The Biggest, Best Light. 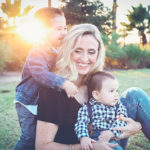 10 Ways to Invest in Moms All Year Long