According to Lifeway Research, 28% of pastors say loneliness or lack of friendship is a mental challenge they face in ministry. Billy Walker, pastor of Calvary Church, joins Ben Mandrell, president and CEO of Lifeway Christian Resources, to discuss the Greatest Needs of Pastors study and navigating loneliness in ministry.

Ben Mandrell: I’m here with Billy Walker, pastoring in Michigan. Thanks for coming on with us.

Billy Walker: Thanks for having me.

Ben Mandrell: Well, Lifeway Research is coming out with some important findings about where pastors are, and there are some real struggles out there. Twenty-eight percent of pastors say that the pulpit is a lonely place. It’s hard to find friends. It’s hard to have community. What kind of things are you doing to find friendship? Or what would you say to other pastors?

Billy Walker: First of all, totally understand that. The first two minutes after a message, when you come down off the platform …

Ben Mandrell: You don’t know how that went.

Billy Walker: Yeah. Do I dart out the door and get to the lobby, or do I just stand here and see if anybody comes? So, that can be a lonely time.

Ben Mandrell: The scary part is you really don’t know if you just scored a home run or whether you just laid an egg.

Billy Walker: And I’m not going to find out untill I get home and talk to my wife anyhow. But it can be a very lonely place. And you know, the interesting thing too is that loneliness is not just for those who have lost a spouse. It seems like the younger generation is feeling just as alone or lonely as an older generation. Part of the job as a pastor is not just to preach it but also to practice it. How do I deal with that? So for me, it’s moments with family, moments with friends, and moments with my Heavenly Father. Of course, I’m being alliterated.

Ben Mandrell: That was very preachable.

Billy Walker: Doesn’t that sound like a pastor? But Sundays are, for pastors, a mountaintop experience to a certain extent. And when that is over, there is this deflation, so to speak, before you start building back up for the next weekend. And I think that something we need to realize is that the mountaintop experiences, even for Jesus, were few and far between. It was the moments that were important.

Billy Walker: Peter goes up the mount of transfiguration and he’s like, “Hey, let’s build some tabernacles here and stay.” Jesus was like, “No, this was good, but we’ve got to go back down and get into the work.” There were moments that needed to follow that. We’re privy to those moments because we have Scripture in the New Testament. We get to read those. But we need to understand that it’s the moments. It’s not the mountaintop experiences. They’re going to happen. And they’re awesome, but we’ve got to understand it’s the moments that are important—moments with family, moments with my wife, date night. I’m making sure to cherish that time. Even if it’s just squeezing that moment in sometimes … life can get hectic and busy. Dare I say if there was one thing that was good about the pandemic, my wife and I spent a lot more time together during that isolation period. And we got a lot of stuff done around the house and all kinds of stuff.

Ben Mandrell: Yeah—things you’ve been wanting to do for a long time.

Billy Walker: But it was really cool too because it’s like we still love each other. We enjoyed this. You’ve got to make time in ministry for those moments with her. Friends are important. I know that some pastors will say, “You can’t have any friends inside the church.” I think that’s almost impossible. Even Jesus had His favorites, right? Peter, James, and John …

Ben Mandrell: How did He pull that off?

Ben Mandrell: He hangs out with three more than the other nine. And everybody’s okay with this.

Billy Walker: Well, you know, they did get in that little fight walking down the road, right? When James and John’s mother came up and said, “Hey, you know, when you get to heaven, how about if these two…” and everybody else started crowing about that. So, I do think He had to deal with it a bit. But you’re going to have people. And I think it’s great to have some friends. You also, though, have to have some relationships outside the church. And that’s why it’s cool. We’re here even at a conference right now, and the ability for pastors to get together and to share—whether it’s pastors and wives or just pastors—man, that’s important.

Ben Mandrell: And to be challenged by one another. You meet pastors, and you’re like, “Oh, that guy is so good at prayer. I need more of him in my life.” It’s good to rub shoulders with other guys who have skills that are different than yours.

Billy Walker: Yep. And then the last one is moments with your heavenly Father. And worship is what comes to my mind. Now I’m actually kind of a strange one in that I majored in music.

Billy Walker: And so music was my life for a long time.

Ben Mandrell: That explains the hair.

Billy Walker: I really did not anticipate …

Billy Walker: Yeah, there you go. I did not anticipate necessarily going into the pastorate. So, music’s always been an important part of my life. But man, some of the best worship times that I’ve had with God have been driving down the road or just in my office. And all of a sudden, whatever I’m doing, I have to stop because there is just something going on and tears are flowing. He inhabits the praise of His people. He does that on an individual basis too. We have to remember that the last thing He said to His disciples is, that you’re never alone in this. I’m with you always. And so even when we feel alone, we’re not. 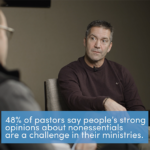 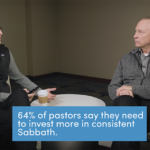 Video: Why Taking Sabbath is Hard for Pastors 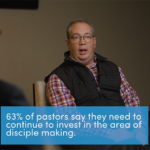 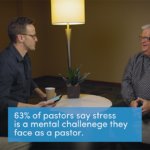 Video: Dealing With Stress in Ministry