Man’s kingdoms are not God’s kingdom. Here are four reasons pursuing political alignment is not the same as pursuing church unity.

It seems incredibly significant that one of the three temptations Jesus faced in the wilderness regarded political power. After Jesus refused temptations to miraculously break His fast and to foolishly risk His life, Satan promised Jesus “all the kingdoms of the world” (Matthew 4:8, CSB) in exchange for a praise offering. “I will give you all these things if you will fall down and worship me” (Matthew 4:9, CSB). Jesus, unwilling to sin, pointed the devil to the true, rightful object of worship: “the Lord your God” (Matthew 4:10, CSB).

It also seems significant there was no sexual temptation, but a political one. It was as if Satan understood the draw to earthly authority was not minor. And God determined it major enough to enumerate it specifically in the gospels of Matthew and Luke.

It represents a sad departure from God’s will, then, when Christians pursue the kingdoms of this world rather than the Kingdom not of this world.

In His well-known prayer in John 17, Jesus requested of the Father “that they may be one as we are one” (John 17:11, CSB). Far too often today, we see this prayer temporarily unanswered—unity in the body hurtling away like a wheel sprung loose on the interstate.

Rather than unity in the gospel, many Christians find themselves coalescing around political preferences, charging those with opposing views as being unbiblical at best or heretical at worst. This is seeking a false unity. Man’s kingdoms are not God’s kingdom. Here are four reasons pursuing political alignment is not the same as pursuing unity.

Divisions in American society, exacerbated by online platforms like Twitter, Facebook, and TikTok, are so deep and pervasive that they affect—if not infect—the church. Online debates lead to hurt feelings, judgment, and breaking of fellowship.

“Walls that once separated the world from the church, now, too often, separate the church from itself.” — @martyduren Click To Tweet

Tribalistic choosing of sides further cements the divisions. Walls that once separated the world from the church, now, too often, separate the church from itself. Euodia and Syntyche, who Paul rebuked for not getting along—after previously contending for the gospel (Philippians 4:2-3)—could probably be social media influencers in this era.

What is the message of His kingdom? Repent and believe the gospel.

What are the ethics of His kingdom? The Sermon on the Mount.

What is the hope of His kingdom? The resurrection of the dead.

Who are the leaders in His kingdom? Those who serve everyone.

What is the currency of His kingdom? Love.

Until the coming of the King, God’s kingdom infiltrates the world with the gospel subversively. It’s the upside-down kingdom for which there is no earthly parallel. God intends His kingdom of salt and light to bear witness to Jesus until His physical return to rule in person. Until then, no political party gets it right enough to be God’s party.

Politics in America has become a winner take all, zero-sum game. The goal is to come out on top regardless of the consequences or collateral damage. It has become nearly impossible to hold political positions that cross the lines of the two dominant parties.

The dangerous result is many being formed by politics rather than being salt and light in society. Those who claim to disciple others in the life of Jesus come perilously close to being discipled by the world away from that life. When biblical discipleship is a hollow front for politicization, we have lost the plot.

Bonnie Kristian, author of Untrustworthy: The Knowledge Crisis Breaking Our Brains, Polluting Our Politics, and Corrupting Christian Community, writes at Christianity Today, “There’s a name for that utter bewilderment many of us feel toward political discussion. It’s called mind-blindness, the inability to recognize that other people have different experiences, wants, values, and knowledge and that this leads them to make decisions different from our own.”

Empathy is the ability and the willingness to understand how other people feel, why they feel as they do, and to share their feelings. Empathy doesn’t indicate agreement, necessarily, but it does indicate deep care. Paul expressed empathy to the Thessalonians, reminding them how he and the other apostles were gentle among them like “a nursing mother” who “cared so much” for them that they shared their own lives (1 Thessalonians 2:7–12, CSB).

When battle lines are drawn, empathy is one of the first casualties. We find it hard to care deeply about people we are trying to obliterate politically.

Such is not the way of Christ.

Seek first the kingdom of God

The pages of the New Testament include numerous poems and hymns pointing to the supremacy of God’s kingdom over human kingdoms. Mary spoke of a Savior who “toppled the mighty from their thrones” (Luke 1:52, CSB). Paul sang of the servant who received “that name that is above every name…Jesus” (Philippians 2:9–10, CSB). A Colossian hymn speaks of Jesus as being before all things, the one by whom all things hold together. All things were created through and for Him, including “the visible and the invisible, whether thrones or dominions or rulers or authorities” (Colossians 1:15–20, CSB).

So, we should not be surprised when the psalmist contrasts eternal and temporal kingdoms, reminding us which should always have priority:

“Ask of me,
and I will make the nations your inheritance
and the ends of the earth your possession.
You will break them with an iron scepter;
you will shatter them like pottery.

Aligning churches along political lines runs the risk of idolizing the pottery destined to be shattered, rather than the Potter who is sovereign over them all. May it never be in the churches of God.

Marty is a freelance writer and editor in the Nashville, TN area. He also hosts the Uncommontary podcast. 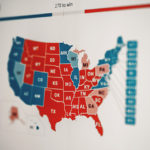 Whether They Realize It or Not, Pastors Influence Young People on Politics 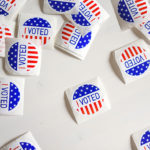 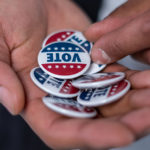 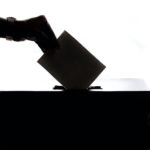