“We’ve Never Done It That Way Before!”

You have probably heard about this church. Its story has been in print for quite a while. The church was new, assembling together after the departure of their leader. From a human perspective, their future was bleak. No one outside the church expected them to succeed.
Probably some of the church members themselves were wavering in their faith as well, but they tenaciously held to their conviction that something great was about to happen. Well something did happen. Something almost unbelievable happened. This church exploded. From a faithful few, three thousand became followers of Christ and were baptized in one day! And the growth and conversions continued daily.
The church, of course, was the first church. The town was Jerusalem. And the story of the explosive growth is detailed in Acts 1-7.
Now you might expect that such a church would not have to deal with some of the same issues as those in the established church. Such unparalleled evangelistic growth may seem to have little in common with the many struggling established churches today.
But all churches, to different degrees, are confronted with the not-always-so-pleasant constant called change. I suspect that the first church handled the initial change well. After all, the words of Jesus’ promise had been fulfilled at Pentecost. The power of the Holy Spirit was on the church.
Thousands were following Christ.
The people of Jerusalem were in awe of the church.
Excitement abounded.
Hope was fulfilled.
The rag-tag followers of Christ were making an obvious difference in the Kingdom.
This type of change was obviously well received. But another major change impacted the church later. Jesus had commissioned the church to be witnesses not only in Jerusalem, but “in all Judea and Samaria, and to the ends of the earth” as well (Acts1:8).
The church responded obediently to the first part of the command; the followers were definitely witnesses in Jerusalem. But what happened to the obedience to the other parts of the command—to extend the witness to all of Judea, Samaria, even to the ends of the earth? Is it possible that the church was satisfied with its work? Was there resistance in responding to leave Jerusalem? Did the change associated with leaving their homes just seem too painful?
Whatever their motives for remaining in Jerusalem, the church did not initially fulfill all of Christ’s command. God eventually allowed persecution of the church so that the people would scatter (Acts 8:4). Men, women, and children left their homes and moved to other locations to escape persecution. The gospel was proclaimed wherever these believers traveled. Is it possible that such fierce persecution was necessary to initiate change in the early church? Was this action necessary to break the holy huddles in Jerusalem?
While some of the points are speculative, the central theme is the same: Churches have been dealing with change since Pentecost. One of the most important factors in the health of a church is the manner in which its leaders in which its leaders initiate and handle change. It is especially critical in the established church.

Adapted from Obstacles in the Established Church (Rainer Publishing, 2014) 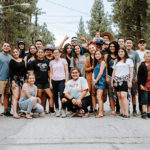 4 Truths the Next Generation Needs to Know About the Church