This year may have been a time of cultural and political change, but Bible readers turned to familiar verses more than ever in 2016—especially the Psalms.

In the two previous years, no book of the Bible had more than two verses in the top 10 and Psalms never had more than one. This year, Psalms has five.

Psalm 23 is the most popular Old Testament chapter with six verses in the top 100, all among the 11 most favorite. Verses from Philippians 4 grabbed five spots on the list, but no verse from any other chapter of Paul’s letters to the church in Philippi made the cut.

Romans and 1 Corinthians are the two other most popular books of the Bible on BibleGateway with nine verses each among the 100 most popular verses this year.

Philippians 4:6, while at the bottom of the top 10, was the verse with the most notes, highlights, and favorites at BibleGateway this year.

On the YouVersion Bible app, Romans 8:28 was shared, bookmarked, and highlighted more than any other verse on the app in 2016.

This year was a banner year for the YouVersion Bible app as it reached a quarter of a billion installs and crossed the 1,000-language threshold. 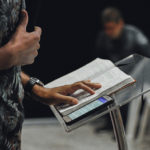 Most Popular Sermon Passages, Topics in 2021