A majority of Americans believes our society is still unhealthy, sick, and debilitated when it comes to our ability to relate to one another across ethnic lines. More than 7 in 10 Americans told Lifeway Research, “we’ve so far to go on racial relations.”

If we want to see progress toward true reconciliation between Black and white Americans, we have to acknowledge things aren’t where it needs to be as long as either thinks the relationship is still suffering. Today, more than 8 in 10 black Americans say we have far to go in terms of reconciliation, while 71% of all Americans agree.

Despite this widespread agreement, it’s not uncommon for some to prefer to ignore our history. In February, we see reminders of Black History Month and some assume it’s for only elementary students to study or purely for Black people to remember their history.

In reality, if you’re an American, Black history is our history. None of us can separate ourselves from it. The heroes and villains of this story have made American society what it is. As each generation comes to grips with slavery’s shocking history, it’s humbling to see how the tentacles of racism extend to our present day.

Why do we not want to face this reality? Perhaps it’s because we would have to admit we’re not innately good. As we learned in our recent State of Theology study with Ligonier Ministries, two-thirds of Americans believe “Everyone sins a little, but most people are good by nature.” Our culture perpetuates the myth of inherent, unbroken human goodness.

Our culture perpetuates the myth of inherent, unbroken human goodness, but we are sinful. And our inability to overcome racial divides is a troubling reminder of our sinfulness. Click To Tweet

Yet for generations our society’s inability to overcome this relational divide between ethnicities is a troubling reminder that we are, in fact, sinful. We see it. We hate it. But the secular methods we’ve used to address it continue to fall short.

How can churches make a difference on racial reconciliation?

The only possible hope for progress on racial reconciliation must come from a power beyond what is inside Americans themselves. Many Americans are open to this possibility of faith playing a role, including 57% who believe religious leaders can positively impact race relations in America. But our desire is for the church’s influence to be powerful and not just positive.

Ellis defines theology as “the application of God’s Word to all areas of life.” He points out that the traditional test of orthodoxy in white culture tends to be conceptual. White churches tend to point to statements of faith or creeds and confessions and looks for people to agree or not. In contrast, for the black church the test tends to be existential (whether one understands what truth means in terms of the present situation). He adds a third test from Scripture, a test that is situational (whether one is obedient to the ethical implications of Christ’s teachings).

We see discipleship parallels for these three important elements of theology. As followers of Christ, we want to become more like Christ in terms of knowing, being, and doing.

In Counterfeit Gods, Tim Keller—drawing from John Calvin—says, the human heart is an idol factory. “The human heart takes good things … and turns them into ultimate things.” It’s easy to take one of these elements of theology and to make it ultimate when in fact they’re intrinsically tied together and equally important.

How does theology help explain our history of difficulty in racial relations? During the Civil Rights Movement, Black church leaders applied truths to specific unjust realities in society. They did not just do so in word, but they put the ethical implications into practice—often at great cost.

Meanwhile many white churches said some of the right things at the conceptual level—”all people are created equal”—but failed to see or act on actual inequalities within society.

How does theology help explain our current difficulty in racial relations? It is easy for whites, myself included, to state our love for all people and teach that all humans are created in God’s image. We point to official statements and organizational apologies and believe the work is done. And yet we wonder why there is little real improvement. We repeatedly fail to look beyond the conceptual.

To move beyond knowing, we have to be willing to go to the present situation and be ethically obedient there. We cannot act as if we’re making progress in racial relations if we’re only always surrounded by our own ethnicity. Our theology demands that we go beyond our current relational circles and spend time with people of other ethnicities.

Our theology demands that we go beyond our current relational circles and spend time with people of other ethnicities. — @smcconn Click To Tweet

If the full extent of our racial reconciliation effort lies in teaching alone, it falls short. Scripture highlights this fallacy. James 1 says we shouldn’t deceive ourselves just by listening to God’s word; we have to do what it says. 1 John tells us that we have to love with more than just words and speech but with action and in truth. But maybe a contemporary quote reflects this need as well.

In the movie One Night in Miami, Jim Brown says to Malcom X, “Some white folks can’t wait to pat themselves on the back for not being cruel to us. Like we should be singing Hosanna because they found it in the kindness of their hearts to almost treat us like real human beings. Do you expect a dog to give you a medal for not kicking it?”

Living in the Present

White Christians don’t deserve a medal for being present with people of other ethnicities, but there is also no other way to begin to put our faith in action. For many churches this isn’t the case within their own walls. More Americans agree churches are too segregated than those who disagree (42% versus 36%). The other 22% of Americans aren’t sure.

As a child, I lived in a trailer park, attended a school, and participated in a church in Minnesota that were all predominantly white. When I was 11, our family moved to the outskirts of Philadelphia. For the first time, I got to experience a multiethnic environment.

I did a lot of watching and listening. I wasn’t thinking about racial relations (I had no clue what that was). I was simply trying to figure out where I fit in. One place was on the basketball court. Despite a much higher level of play than I had experienced in Minnesota, I felt accepted by my Black classmates on and off the court. I made some mistakes in these relationships, but I also experienced forgiveness.

It was through these friendships that I experienced settings for the first time in which I was the only white person present. Only now looking back do I realize what these friendships and experiences instilled in me. I gained a motivation that makes me enter relationships with people who don’t look like me with an immense optimism that I will enjoy knowing them.

Learning where we can obey

As we grow in our knowledge of God, we see over and over in Scripture His heart for those experiencing injustice. In Exodus 3, God tells Moses through the burning bush that He has heard the cries of His people and is going to act. We also see repeated in the law, Psalms, and prophets God’s desire for his people to care for resident aliens, the fatherless, and widows.

As we grow in our knowledge of God, we see over and over in Scripture His heart for those experiencing injustice. May we come to share this inclination of God’s heart. — @smcconn Click To Tweet

May we come to share this inclination of God’s heart. With that love, we will want to take action when we see examples of relations, rules, or patterns that don’t reflect the truths that we teach.

As I continued to meet African Americans in college, I found that some of them had experienced racism in tangible ways I hadn’t encountered before. My first reaction was disbelief. Unfortunately, that may be the only memory some of these classmates will ever have of me.

I began to learn that ugly racist encounters do happen in America today and far more often than I wanted to hear. The experiences of my classmates helped me notice similar things elsewhere and motivated me to want to know more about the history of our nation’s struggle with race relations.

Sometimes as I learn about our history—often only a decade or two before my own life—I’m shocked at how blatant the indiscretions were. I sometimes find it easy to condemn those in the white majority culture at that time. But that also haunts me because it shows how easily I could make similar mistakes. Some of the same attitudes that have fostered racism in recent years also enable unjust treatment of other ethnic or socioeconomic groups today.

Churches’ role in curing the sickness of racism isn’t a call for a “fix-it” campaign. It’s like every other aspect of discipleship—a call to live out biblical theology conceptually, existentially, and situationally. — @smcconn Click To Tweet

Churches’ role in curing the sickness of racism in our culture isn’t a call for a “fix-it” campaign. It’s like every other aspect of discipleship—a call to live out biblical theology conceptually, existentially, and situationally.

God looks at our hearts. Devotion and faithfulness to Him are what He desires to see at the center of our lives. As we interact with people in our culture and other cultures, we are called to be faithful. That faithful obedience works to transform all cultures to better reflect God’s kingdom. 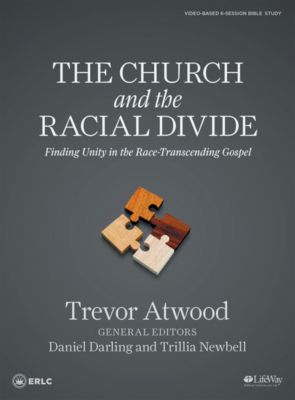 The Church and the Racial Divide
Trevor Atwood FIND OUT MORE