A recent study polled 40,000 people ages 8 to 80 to see how people were engaging in Scripture. The Center of Bible Engagement compiled the extensive research findings by Arnold Cole and Pamela Caudill Ovwigho into “Understanding the Bible Engagement Challenge: Scientific Evidence for the Power of 4.” As they compiled the results, they made a profound discovery they were not even looking for when they originally planned the survey.

Three times a week saw a small indication of life. There was a slight pulse, a faint heartbeat. Something moved in the behavior of the person engaging in Scripture. The eye opener happened when Bible engagement reached at least four times a week.

There are profound differences between people who engage the Scriptures at least four times a week and those who engage with Scripture less often. Click To Tweet

A steady climb of impact would have been expected, but that was not the case. The level was basically stagnant over days one and two, with a small bump on day three. But when day four was reached, the effects spiked in an astounding way. The stunning findings included the following:

The research literally leaps off the charts. The findings hammer home the truth that there are profound differences between people who engage the Scriptures at least four times a week and those who engage with Scripture less often.

This data is extremely revealing. There is a full-blown effort to keep the followers of Christ from consistently reading the Bible on a daily basis.

People who engage the Bible one to three days a week indicate basically the same effect on their personal lives as those who do not engage at all. Click To Tweet

Integral to these findings is that people who engage the Bible one to three days a week indicate basically the same effect on their personal lives as those who do not engage at all. The deceptive reality is that they can feel good about their activities without any sustainable results. They think they’re being “good Christians,” but their lives are no different than people who aren’t Christians at all.

This can be devastating to a movement. Limited activity is elevated to the same effect as consistent activity, when it is actually the same as no activity.

Limited activity is often elevated to the same effect as consistent activity, when statistically it is actually the same as no activity. Click To Tweet

The reality is that with a lack of consistent Bible engagement defined as at least four times a week, Christians have less confidence in sharing their faith with others and are more vulnerable to falling prey to false teachings, as well as a lethargy and apathy in consistently living out their faith in their circle of influence.

The studies show that the best spiritually based predictor among 13- to 17-year-old teenagers was their engagement in Scripture.

Similarly, when examining children raised in church, a Lifeway Research study found the biggest factor for predicting their spiritual health as young adults is whether they read the Bible regularly as kids.

The other side of the coin is equally conclusive and encouraging. The more Christians read or listen to the Scriptures at least four times a week, the more bold they will be in sharing their faith and growing in their faith. Their lives will begin to have a profound impact on those immediately around them. There will also be fewer times of stagnation in their spiritual growth. They will become viral in their faith.

The more Christians engage with the Scriptures at least four times a week, the more viral they will become in their faith. Click To Tweet

This mounting evidence of the impact of Scripture on not only the individuals in a society but on the actual underpinnings of an entire society can lead to the findings being discouraging when you find out that most people are not communicating to their center of gravity and are cut off, making them vulnerable to invasion. But the power of simplicity goes both ways. When a critical node is identified and reengaged, the entire system can be reinvigorated with astonishing and rapid effect.

There is an answer. There is hope. Just keep it simple.

Jeff is a Fellowship of Christian Athletes executive director and founder of Fields of Faith.

This article is an edited excerpted from Empower: The 4 Keys to Leading a Volunteer Movement with permission from B&H Publishing. 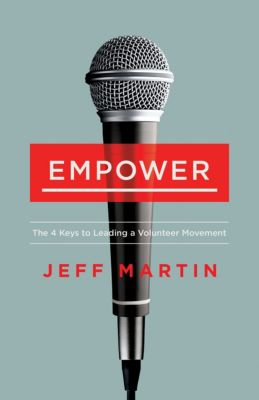 9 Tangible Benefits of Bible Reading for Your Church