One of the great tragedies of the 20th century was the way many Christians abandoned the biblical approach to evangelism in favor of an American business model that involved “closing the sale.”

Yet, a 2016 Lifeway Research study found that 79% of unchurched Americans say they don’t mind having a religious conversation with a friend who really values their faith. But, as churches adopted the sales technique, conversions and church membership began a precipitous decline.

One of the great tragedies of the 20th century was the way many Christians abandoned the biblical approach to evangelism in favor of an American business model that involved “closing the sale.” — Harry Lee Poe Click To Tweet

In contrast to this approach, the conversion of C.S. Lewis demonstrates the continuing power of the biblical model. Lewis did not become a Christian by responding to a “model presentation.” His conversion took place over a number of years and involved numerous conversations with many Christian, each of whom played a small part in answering his questions.

Like millions of others, Lewis struggled with the problem of suffering. Specifically, he wondered how a good, loving, all powerful God could let his mother die of cancer. Then, he wondered what made the Bible any different from the mythologies of ancient Greece and Rome. By age 16, he was a confirmed atheist. About the same time, however, he made his first true friend. Arthur Greeves was a devout Christian who would not be moved by all the arguments young Lewis threw at him about Jesus being only a good teacher.

Arthur Greeves, C.S. Lewis' first true friend, was a devout Christian who would not be moved by all the arguments young Lewis threw at him about Jesus being only a good teacher. Click To Tweet

In They Stand Together: The Letters of C. S. Lewis to Arthur Greeves, Lewis wrote that “I learned charity from him and failed, for all my efforts, to teach him arrogance in return.” Even as teenagers, Lewis was brilliant and Arthur rather dull and inarticulate, yet Lewis observed that Arthur proved to be the victor in the debate. He simply remained steadfast in his faith, and his gentle life reflected that faith. These are the things Paul explained in the first chapter of 1 Corinthians. The gospel’s power is not found in human reason or eloquence.

When Lewis took up the study of literature at Oxford in 1922, he encountered some new friends. The first of these was Nevill Coghill, a fellow Irishman, but a Christian. Unlike Arthur, Coghill was brilliant. Lewis could not understand how someone who was brilliant could be a Christian.

Nevill Coghill forced C.S. Lewis to wonder if he and modernity had lost something valuable and if the modern world were more barbaric than the old one. Click To Tweet

What disturbed Lewis even more about Coghill was his character. Coghill encouraged Lewis’s writing and helped him find a publisher for his second book, Dymer. He lived out such traits as chivalry, honor, and courtesy. In his autobiography Surprised by Joy, Lewis used the French word gentilesse to describe him. It includes such traits as kindness, amiability, caring, and helpful. These were all old-fashioned qualities which a thoroughgoing modernist like Lewis could not grasp. Coghill forced Lewis to wonder if he and modernity had lost something valuable and if the modern world were more barbaric than the old one.

In 1925, Lewis gained a teaching post in English literature at Magdalen College. The fellows who taught English at all the Oxford colleges composed the English Faculty, and the combined faculty determined the common syllabus—what would be taught, expected, and tested. At an English Faculty meeting soon after his appointment, Lewis met the new professor of Anglo-Saxon, J.R.R. Tolkien. Tolkien proved to be an acquired taste for Lewis who noted in his diary after meeting him, “No harm in him: only needs a smack or so.”

When C.S. Lewis first met J.R.R. Tolkien, Lewis wrote of eventual friend Tolkien in his diary: “No harm in him: only needs a smack or so.” Click To Tweet

Their friendship developed, however, around a mutual love of Norse mythology. Tolkien started a club to read the old myths in the original Old Icelandic language, and Lewis and Coghill both took part. Soon, Lewis and Tolkien began meeting every Monday morning to talk about the myths. At last, Tolkien showed Lewis something he had been writing since his time in the hospital 10 years earlier during World War I. It was a fabulous collection of myths and legends about the world of Middle-earth which Tolkien had created. Lewis loved it. Lewis loved his time with Tolkien. The only problem was that Tolkien was also a Christian.

Through Coghill, Lewis met another new friend, Henry Dyson. Lewis, who was fond of giving everyone nicknames, soon gave Dyson the nickname of Hugo. Hugo Dyson taught English at the University of Reading some thirty miles away by train. Dyson, who had been at Exeter College with Coghill as an undergraduate, made the trip up to Oxford regularly.

He was great company. He had an encyclopedic knowledge of English literature, had a gift for conversation, and could be outrageously witty, clever, and funny. Lewis often invited Dyson to dine and stay the night in his college rooms. Like Coghill and Tolkien, Dyson was a Christian.

The Conversion of C.S. Lewis

Lewis might have remained a safe atheist except for the consistent faith of his Christian friends who never tried to debate or argue him into accepting the doctrines of the Christian faith but who simply made sound, rational sense when they discussed God. Lewis had grudgingly accepted the intellectual idea that some kind of god exists by early 1930, but this god was far from being the God of the Bible. Matters came to a head for Lewis on a September evening in 1931 when he invited Tolkien and Dyson to dine with him at Magdalen College. After the lavish meal followed by coffee, port, smoking, and conversation with the fellows of the college in the Senior Common Room, they retired to Lewis’s rooms for a while and then a long walk on the grounds.

C.S. Lewis might have remained a safe atheist except for the consistent faith of his Christian friends who simply made sound, rational sense when they discussed God. — Harry Lee Poe Click To Tweet

As they talked, Lewis said that he could accept the idea of God, but he could not see why God would take on flesh and die. He could not see what difference it would make. He said it was just the same old dying and rising God myth that could be found in cultures all over the world. As they talked, Lewis came to understand that the story of Jesus is the same old myth found everywhere with one exception—it was the one which actually happened. This troubling insight shook him to the core, and a few days later, he realized that he did believe in Jesus.

The Holy Spirit reserves the exclusive prerogative of bringing about salvation to Himself, but the friends of Lewis were the tools of the Holy Spirit in his conversion. They were willing to talk about their faith without ever thinking that they could cause the atheist Lewis to believe. Still God used their faithfulness and love for their friend to open Lewis’ eyes, and He wants to use us in similar ways today.

Harry serves as Charles Colson Professor of Faith and Culture at Union University in Jackson, Tennessee. He is also the author of numerous works, including The Making of C. S. Lewis: From Atheist to Apologist, 1918-1945. 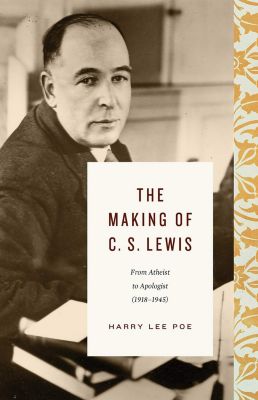 The Making of C. S. Lewis: From Atheist to Apologist