Christians may need Jolly Old Saint Nicholas more than ever this Christmas—not to bring presents to good boys and girls, but to confront heretics denying the deity of Jesus.

Saint Nicholas, a historical precursor figure for Santa Claus, is said to have attended the First Council of Nicea in A.D. 325, where early church fathers debated the relationship between God the Father and God the Son. Additional legends assert Nicholas became so enraged by the comments of Arius, who taught Jesus was not equal to God the Father, he slapped Arius across the face.

Saint Nicholas, a historical precursor figure for Santa Claus, is said to have attended the First Council of Nicea, where he allegedly slapped Arius for arguing that Jesus was not equal to God the Father. Click To Tweet

Recent Lifeway Research studies have indicated that many Americans, including some Christians, are embracing at least some of the concepts of Arianism, the heresy that allegedly caused St. Nick to lose his cool.

As a church leader in Alexandria, Arius began teaching that God the Son had a beginning, unlike God the Father. The early church debate between Arius and other leaders like Athanasius centered around the difference of one Greek letter. Arius argued that Jesus and God the Father are ὁμοιούσιος or homoiousios, meaning “of similar substance,” while Athanasius contended all members of the Godhead are ὁμοούσιος or homoousios, meaning “of the same substance.”

The First Council of Nicea condemned the teachings of Arius, which became known as Arianism. Within a decade, however, Roman Emperor Constantine convened another gathering, at which Athanasius was exiled and Arius exonerated. Though in the end, Athanasius and those defending Trinitarian orthodoxy were restored to their positions and Arianism lost its sway.

That doesn’t mean the beliefs popularized by Arian have disappeared, as many still struggle with the eternal relationship of God the Father, God the Son, and God the Holy Spirit.

The 2020 State of Theology Study found almost 3 in 4 Americans (72%) say they believe in the doctrine of the Trinity, but most struggle with specifics surrounding Jesus and the Holy Spirit. Majorities also agree with statements that contradict Trinitarian theology, including one that mirrors Arianism—55% say Jesus is the first and greatest being created by God.

Americans who attend a religious service at least monthly are more likely than those who attend less frequently to say Jesus is the greatest being God created (68% to 44%), according to Lifeway Research. Click To Tweet

And that belief, unfortunately, is more common in church than outside it. Americans who attend a religious service at least monthly are more likely than those who attend less frequently to say Jesus is the greatest being God created (68% to 44%).

Similarly, 80% of Americans say Jesus Christ is the Son of God the Father, but half that (41%) say the Son of God existed before Jesus was born in Bethlehem, according to a recent Lifeway Research study.

Even among those who attend church at least weekly, only 63% say the Son of God existed before Jesus was born in Bethlehem. Click To Tweet

Regardless, a sizable percentage of weekly churchgoing Christians are at the very least confused about core biblical doctrines. For Brandon Smith, a theology professor at Cedarville University, this is the result of both pastoral and hermeneutical issues within the church.

Smith said it can be understandable why pastors don’t often wade into Trinitarian waters on a regular basis. “The Trinity can feel ‘impractical’ to a pastor who is often just trying to help his folks get through the week,” he said.

Smith, who has published research on the Trinity and the early church, also suggested that pastors may lack the confidence to tackle such an imposing doctrine. “Pastors often avoid the topic other than perhaps a hat-tip here and there or a line in the church’s doctrinal statement,” he said.

Smith went on to say that the person in the pew can become a Christian without any formal training but working through the doctrine of the Trinity requires some training, practice, and intentional contemplation. Churchgoers often “know the right answers to the doctrinal test,” he said, which is why almost all affirm the Trinity. Yet they can’t articulate the doctrine themselves, which leads to confusion of Jesus’s existence prior to Bethlehem.

“I think it’s fair to say that pastors are not intentionally training people on the Trinity—perhaps the most difficult yet important doctrine of the Christian faith—and thus people know they should affirm it but have no clue how to articulate it or even recognize it in their Bibles,” said Smith.

So, should modern Christians follow the legendary example of Nicholas and slap someone expressing unorthodox views on Jesus’s deity? Probably not. More often than not, people just don’t fully understand complex theological concepts like the Trinity. They aren’t trying to spread heresy.

“I don’t think your average evangelical pastor is a functional Arian,” Smith said. “I’ve just seen time and again a negligence to teach the doctrine meaningfully.”

“We insult our church members when we think they can’t handle or aren’t interested in thinking more deeply about Scripture and the theology therein.” — @brandon_d_smith Click To Tweet

Pastors have many expectations about their responsibilities within the church, but Smith said this falls under the biblical requirements for the role. “Pastors first have to ‘be able to teach’ (1 Timothy 3:2) and ‘hold to the pattern of sound teaching’ (2 Timothy 1:13), so they are actually prepared to ‘guard the good deposit’ (2 Timothy 1:14) and correct those who are either untrained or ‘will not tolerate sound doctrine’ (2 Timothy 4:3),” he said. “Simply put, the pastor’s responsibility is to be a theologian.”

Churchgoers are looking for this, according to Smith.

“Most Christians want to understand their Bibles better, and most of them trust their pastors to help them do that,” he said. “We insult our church members when we think they can’t handle or aren’t interested in thinking more deeply about Scripture and the theology therein.”

Smith said pastors and church leaders must be more intentional in providing opportunities for the congregation to learn, whether it’s a sermon series, Sunday School curriculum, special “theology nights,” or other ideas. “The pastor has to set a culture of theology at the church where it’s expected and hungered for,” he said. “This is easier said than done, of course, but the church’s concern for sound doctrine will largely go as far as the pastor’s concern for sound doctrine.” 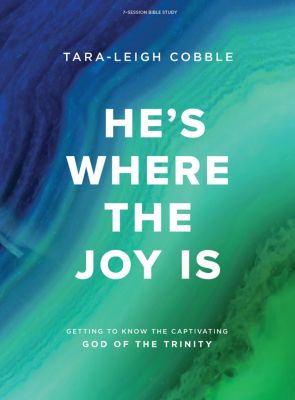 He’s Where the Joy Is Bible Study: Getting to Know the Captivating God of the Trinity