Americans are curious about the religious devotion of others and are willing to discuss the topic, but most say they rarely have conversations about faith with their Christian friends.

An Evangelism Explosion study conducted by Lifeway Research found Americans are widely receptive to spiritual conversations in a variety of settings.

“Now, perhaps more than ever, people are open to conversations about faith, yet few Christians actually take the opportunity to engage in personal evangelism,” says Dr. John B. Sorensen, President and CEO of Evangelism Explosion International. “Our mission at EE is to equip Christians to have the confidence to share the gospel naturally, lovingly, and intentionally with family, friends, and yes, even strangers. We imagine a world where every believer is a witness for Christ to His glory.”

51% of Americans say they’re curious as to why some people are so devoted to their faith, including 60% of the religiously unaffiliated, according to an @EEvangelism and @LifewayResearch study. Click To Tweet

“This study reveals that most Americans are open to talking about faith,” said Scott McConnell, executive director of Lifeway Research. “It really isn’t about religious liberty, people not wanting to hear, or religion being off-limits. The reason conversations are not happening about the Christian faith is that Christians are not bringing it up.”

Amid this curiosity, however, most say their Christian friends don’t often bring up their religious beliefs. Six in 10 (60%) Americans say many of their friends who claim to be Christians rarely talk about their faith, including 52% of the religiously unaffiliated.

60% of Americans say many of their Christian friends rarely talk about their faith, according to an @EEvangelism and @LifewayResearch study. Click To Tweet

Still, for many, religion is not something they think about unless others broach the subject. Two in 5 Americans (40%) say they wouldn’t think about faith on their own unless a friend or family member brought it up. The religiously unaffiliated (50%), young adults 18 to 34 (49%) and men (47%) are among those more likely to say they do not think about matters of faith unless others bring up the topic.

“There is a quiet chasm between the religiously devoted and those who have no religion in the U.S.,” said McConnell. “The irony is that religious devotion intrigues many people, yet many avid Christians fail to share why faith is so important in their lives.”

Despite how important most Americans say eternal life is, few say they have such certainty. Slightly more than a third (37%) say they are sure they will be with God in heaven. Another 11% say they are somewhat sure, while 23% say they hope they’ll be in heaven. Few (4%) don’t expect to make it, and 6% are sure there is no God or heaven. According to 17% of Americans, no one can know if they’ll go to heaven.

When contemplating a conversation with God about getting into heaven, Americans are split between pointing to their goodness or trusting in Jesus. Considering the question, “If God asked you, ‘Why should I let you into my heaven?’ what would you say?” 38% say they would respond that they trust in Jesus Christ alone, while 34% say they would respond that they are a good person. Few (4%) say they would bring up that they’ve been a very religious person. Some don’t know (12%) or prefer not to answer (5%). Another 7% don’t believe God exists.

55% of U.S. adults say it’s very important to be sure they will go to heaven or have eternal life, but just 37% say they have such certainty, according to an @EEvangelism and @LifewayResearch study. Click To Tweet

“A quarter of Americans see heaven as a question mark or less,” said McConnell. “But the rest are evenly divided between relying on someone else—Jesus Christ— or themselves to be admitted. There’s a stark difference between heaven being a badge of affirmation for your human life or a mark of God’s ownership of your current life.”

Fewer Americans are open to these types of conversations with people they don’t know, but still, at least half will talk about spiritual matters with a stranger. Half of Americans (51%) say they’re at least open to faith discussions with a stranger, with 26% saying they’re very open. When asked about having conversations with a stranger about the Christian faith specifically, 52% say they’re at least open, with 27% saying they’re very open. Slightly more than half say they are open (24%) or very open (30%) to talking with someone they don’t know about having a relationship with God.

Two in 3 Americans say they’re at least open to having a conversation about faith with a friend, including 41% who say they are very open, according to an @EEvangelism and @LifewayResearch study. Click To Tweet

“Religion is a taboo topic for some, but actually very few people feel this way if it is between friends,” said McConnell. “There is typically no way of knowing ahead of time if someone hates the subject of faith, but the majority are open to you bringing it up even if they don’t know you.”

Compared to in-person conversations, Americans are less likely to want to have a spiritual discussion on social media, according to an @EEvangelism and @LifewayResearch study. Click To Tweet

As most Americans are already open to spiritual conversations, there aren’t many tools or tips that would make them more likely to engage in those discussions.

Almost half of Americans said it would not change their level of interest in continuing a conversation about faith if the other person shared a pamphlet or brochure (45%), showed information via an app (45%) or quoted from their religious text (49%). Similarly, around half (49%) say they wouldn’t be more willing to listen to someone else’s religious beliefs if the other person first listened to their beliefs.

“Many differences between potential types of religious conversations have no impact on people’s attitude about engaging in those conversations,” said McConnell. “The biggest thing that influences people’s willingness to talk about faith is the presence of a relationship with that person or faith being tied to their life story. If your relationship with God isn’t impacting your life, why would someone else want to hear about it?”

Most religiously unaffiliated Americans are open to hearing about faith when someone can show it matters or when it is shared by someone who matters to them. — @smcconn Click To Tweet

As most consider these to be essential aspects of life, Americans may be more interested to hear how someone’s religious beliefs contribute to obtaining these. Around 7 in 10 Americans (69%) say they want to hear why someone thinks their faith helps meet a core human need. Close to 1 in 5 (21%) disagree. The religiously unaffiliated are more likely to disagree (32%), but the majority still say if someone they knew thinks their faith helps with a core human need, they want to hear more about why that person thinks that.

“For Americans with no religious affiliation, faith is not a goal or a destination,” said McConnell. “While some have reached a firm conclusion that they are not interested in faith, most are open to hearing about faith when someone can show it matters or when it is shared by someone who matters to them.”

Methodology: The study was originated and commissioned by Evangelism Explosion. The online survey of 1,002 Americans was conducted by Lifeway Research Dec. 8-17, 2021, using a national pre-recruited panel. Quotas and slight weights were used to balance gender, age, region, ethnicity, education and religion to reflect the population more accurately. The completed sample is 1,002 surveys. The sample provides 95% confidence that the sampling error from the panel does not exceed plus or minus 3.3% This margin of error accounts for the effect of weighting. Margins of error are higher in sub-groups. 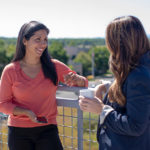