If you’re thinking about retirement, leading a church through change, or going to be the next pastor, it matters how the baton is passed.

Today the average clergy member is 57 years old, compared to 50 years old in 2000, according to the 2020 Faith Communities Today study. In the next 5-10 years, a wave of Boomer pastors will reach retirement age. Unfortunately, few churches plan for pastoral succession. And that transitional period is often difficult.

Bryant Wright, the former long-term pastor of Johnson Ferry Baptist Church, faced this issue. After decades of serving his church, the Lord led Wright to carry out a succession plan. His book, Succession, captures that journey from the first conversations about stepping down to the final sermon he preached before becoming president of Send Relief, an international relief organization that partners with local churches to provide help to those affected by a disaster or crisis.

In the next 5-10 years, a wave of pastors will reach retirement age. Unfortunately, few churches are ready for that transition. Click To Tweet

Whether you can see retirement on the horizon, you’re leading your church through a season of transition, or you’re being called to be the successor to follow a long-tenured pastor, Wright has helpful insights for leading your church through seasons of change. We got to sit down and ask him a few questions about his experience creating and implementing a succession plan. Here’s a look at our conversation:

Why do you think so few churches have a succession plan for their senior leadership?

Why is it so difficult for a pastor to leave a church? And leave well?

It’s difficult because most pastors love their churches and the people of their churches. The longer you’ve been there, the deeper and richer the love. So, it’s hard, humanly speaking, for the pastor to let go. It requires a supernatural grace from God when that time is right.

What are some traits of pastoral transitions that don’t go well?

Number one, the senior pastor, the long-tenured pastor doesn’t have a clear ending date and has a hard time letting go. That’s usually a major reason why it doesn’t go well. Second, the retiring senior pastor isn’t supportive of the pastor who’s following him. Thirdly, the wife of the retiring senior pastor has a hard time letting go. Fourth, the successor doesn’t show proper respect and honor to the long-tenured pastor they’re following.

How does a pastor know when it’s time to leave a church?

You just know. I remember asking my father as a young man, “How do you know you’ve met the right girl to marry?” He said, “You’ll just know,” and that really irritated me because that didn’t tell me anything. But then I met my wife, Anne, and I just knew. And it’s very similar when God is leading you—when the timing is right. But secondly, I experienced a lack of vision for future plans and direction of ministry. A lack of vision for the future certainly helps a retiring pastor know it’s time.

The best advice I can give current pastors is to ask yourself, “What are my gifts? What are my passions I want to focus on when I retire?” — @bryantwright Click To Tweet

How do you know when it’s time to tell the lay leaders of your church and the congregation?

I spoke to the elders about developing a succession plan long before I was ready to retire. That’s the first step in the process to develop a general game plan for succession. Then, continue to be in prayer. When it’s time for the senior pastor to let go, he first tells the lay leaders, and then determines when and how to tell the congregation. It’s extremely helpful to the congregation to hear from the senior pastor’s wife, as well as him. This will assure the congregation that God is leading both of them.

How would you recommend that current pastors prepare themselves for the next ministry assignment or season of life?

Concentrate on your areas of passion. I was sure I was to retire from Johnson Ferry and hand the ministry off to a younger man, but I was not ready to retire from ministry. I wanted to continue to do what I was called to do—to preach the gospel, to preach the Word. The best advice I can give current pastors is to ask yourself, “What are my gifts? What are my passions I want to focus on when I retire?”

Experiment with some things before you retire to see if you could sink your teeth into something or do something that would be fulfilling when you retire. Having an idea of what to focus on is vitally important to helping current pastors prepare themselves for that new season of life.

You mention in the introduction of your book that all pastors are really “interim pastors.” Can you unpack that a bit?

If any church is going to last (and you sure hope it is), you realize that church is going to be around a whole lot longer than the tenure of any pastor. Whether it’s an interim pastorate for six months or an interim pastorate like I had for 38 years, we’re given a stewardship where God entrusts the leadership of a church and a congregation to us. It’s for a period of time. It’s healthier to see ourselves as interim pastors wanting to make the most of that role and lead faithfully in God’s will in that interim as long as He allows.

One, have a weekly Sabbath, where you let go for a 24-hour period once a week. Do that on a regular basis. The Holy Spirit has a way of whispering in a still, small voice in that Sabbath saying, “This isn’t your church, Bryant. This is My church.” Having vacation and sabbatical times are tremendous helps in realizing it’s God’s church.

You and your successor, Clay, had a time of overlap in the transition. A lot of churches don’t plan for that. How important do you think that time was to the health of the church?

Extremely important! Clay and I shared the pulpit and did a sermon series together, throughout the four months we overlapped. There were a few other things that also happened. Number one: I moved out of the office—the pastor’s office—before Clay got there. I wanted the congregation to see Clay as the new pastor.

Secondly, we had a game plan where I led meetings for the first month, and Clay would see how I did it. The next month, we led meetings together with each of us having specific responsibilities for that meeting. In the third month, Clay led the meetings while I was in the room. The fourth month, Clay led the meetings, and I wasn’t there. The congregation was able to see a transition take place. On the last Sunday, Clay and I did the sermon together. I gave him one of my preaching Bibles. It was a picture to the congregation we wanted to continue to be a people of the Book and for Clay to continue to preach the Word. Then the elders and I laid hands on Clay asking for God’s blessing on his ministry. So, we painted a clear picture for the congregation of the transition occurring.

What is the departing pastor’s role once he’s stepped down from leadership to help the church and its new leader move forward?

It’s important that I’m not there that much. In two and a half years, my wife and I have attended about six Sunday mornings. We try to come in just a little late to sit in the back, trying to be as unobtrusive as possible. Obviously, that’s not always possible, as you see people and they gather to speak. But that helps the church move forward. Clay is there, and I am not. I always try to let people know how much I appreciate Clay and am excited for him to be the pastor. I think it’s key for me to affirm Clay for the church to move forward into the future. 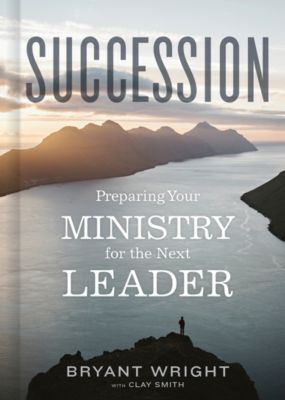 Succession: Preparing Your Ministry for the Next Leader