According to Lifeway Research, 48% of pastors say people’s strong opinions about non-essentials are a challenge in their ministry. Joel Wayne, pastor of Chapel Pointe, joins Ben Mandrell, president and CEO of Lifeway Christian Resources, to discuss the Greatest Needs of Pastors study and convictional leadership when people’s opinions are loud.

Ben Mandrell: I’m here with Joel Wayne who pastors a church right outside of Grand Rapids. Joel, thanks for being with us.

Joel Wayne: Yeah. Thanks for having me.

Ben Mandrell: We’re talking about Lifeway Research and what we’re finding about pastor well-being and struggles of pastors. Forty-eight percent of pastors say they are impacted by the strong opinions of non-essentials.

There hasn’t been a chapter and verse for most of the decisions that have had to be made over the last couple of years. How have you kept your sanity, kept the unity in the church through what has been just this constant debate about the non-essentials?

Ben Mandrell: Any hope that this was just a bump in the road is behind us.

Ben Mandrell: “We’ll get this thing back.”

Joel Wayne: “We’ll get this back.” And it’s been two years. And it’s not going to go away in many regards. So when we look at that, we go, ” Are we here to enforce preferences or to abide by convictions?” And I think churches need more spiritual leaders than ever before.

And often what we’re doing is we’ve got a lot of pastors, a lot of leaders. But because of the pressures around us, I think we’re falling into being really good care people. And pastoral care, being a chaplain, is good. We need that. But right now we need strong biblical leadership.

Ben Mandrell: So you’re saying lead by conviction, not by consensus.

Joel Wayne: Or even preference.

Ben Mandrell: You’re not going to get everyone to agree.

Joel Wayne: Right. Because even with consensus, people are like, “Well, this is what the people want.” And that really means there are three or four loud people speaking into our ears. So I’m not going to even say “consensus.” I would say “preference” of the people in our ears.

Ben Mandrell: So you’ve come to the pulpit and said, ” Church, I’ve talked about this with our leaders. I’m under conviction. Here’s my conviction. And then here’s the decision that flows from that conviction.”

Joel Wayne: Yeah. So even the decisions we’re making right now in the midst of COVID— when we meet, when we don’t meet etc. And we meet together numerous services. I fully believe that Scripture says that we must be in biblical relationship to be healthy. I fully believe that. And if we’re not in touch with each other, if we don’t see each other physically, I don’t think you can be in the biblical relationship that God has designed. So that right there— that conviction— and I’m heavy in that conviction with the book of Acts… so knowing that I’m so convicted by that as a spiritual leader, our church makes decisions based on that.

Now, that means we’re meeting. It doesn’t mean we always meet in the same, normal way, but we’re always going to meet. We know what that may mean for society. We may be forced to pay fines in the future, or whatever it is. We’re willing to do that. We’ve had all those discussions because it’s coming out of conviction. If you don’t live by conviction every week, not only every week, every day, you have to re-evaluate, “What are we gonna do now?” It’s exhausting. It’s absolutely exhausting. 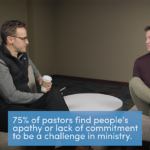 Video: Activating Men for Leadership in the Church