Most evangelicals in the U.S. say they want an immigration solution that both secures the border and values those already in the country.

Substantial majorities of evangelicals in the United States say they want an immigration solution that both secures the border and values those already in the country.

In a study sponsored by the Evangelical Immigration Table and World Relief, Lifeway Research surveyed both self-identified evangelicals and those who qualify as evangelicals by belief to determine their attitudes toward immigrants and refugees as well as their opinions on potential legislative actions addressing the issues surrounding immigration.

“Evangelical Christians should be looking to the Bible—not any political party’s platform, media personalities or even a survey of fellow evangelicals—to determine how they respond to the arrival of immigrants to their communities,” said Matthew Soerens, national coordinator of the Evangelical Immigration Table. “But as evangelical leaders seek both to disciple those under their care and to advocate for public policies consistent with biblical principles, this study allows leaders to verify the extent their positions are in line with the views of evangelicals ‘in the pews’ and to know how to better serve them.”

Evangelicals are most likely to see the number of recent immigrants to the U.S. as an opportunity, but significant numbers also view them as a threat. More than 2 in 5 say the arrival of immigrants is an opportunity to show them love (46%) and an opportunity to introduce them to Jesus (41%). A third (33%) say they are an improvement to America’s cultural diversity, and 19% say they provide a boost to entrepreneurial activity.

On the negative side, 33% of evangelicals say the recent number of immigrants is a threat to the safety of citizens, 32% say they’re a drain on economic resources, 31% see immigrants as a threat to law and order, and 26% view them as a threat to traditional American customs and culture.

“While fear of the volume of immigrants is not absent among evangelicals, the larger response is one of love for these individuals,” said Scott McConnell, executive director of Lifeway Research. “More than four times as many evangelicals find legal immigration helpful to the United States than those who find it harmful.”

American evangelicals believe the U.S. has a moral responsibility to accept refugees and immigrants in a variety of circumstances and that Christians should be caring for them.

More than 3 in 5 evangelicals (70%) agree the U.S. has a moral obligation to accept refugees, which are legally defined as someone fleeing persecution due to specific factors such as their race, religion, or political opinion. Additionally, around 3 in 4 agree that a national moral obligation exists to accept refugees fleeing religious persecution (74%) and people fleeing natural disasters (73%). Smaller majorities of evangelicals agree there is a moral obligation for the U.S. to accept people from other countries seeking to be reunited with family members already in the U.S. legally (67%) and people from other countries fleeing poverty (60%).

Additionally, 69% say Christians have a responsibility to care sacrificially for refugees or other foreigners, and 58% say Christians should assist immigrants even if they are here illegally.

“World Relief alone has partnered with thousands of churches and tens of thousands of volunteers to resettle refugees and serve other immigrants in the past decade, and of course, many churches have their own ministries to immigrants as well,” said Soerens, who also serves as the U.S. director of church mobilization and advocacy at World Relief. “Over the past year, the arrival of large numbers of Afghans and Ukrainians who were forced to flee their homelands has reminded many Christians of their biblical calling to love these uniquely vulnerable neighbors.”

In each area of national and personal responsibility, evangelicals by belief are more likely than self-identified evangelicals to strongly agree that a moral obligation exists.

Seven in 10 evangelicals (71%) say it is important that Congress pass new immigration legislation in 2022. When asked about specific types of emphases they would prefer in immigration policy, evangelicals want laws that provide citizenship opportunities for those who are here illegally and that also protect the U.S. border.

More than 3 in 4 evangelicals say they support potential legislation that ensures fairness to the taxpayer (94%), protects the unity of the immediate family (92%), respects the rule of law (92%), respects the God-given dignity of every person (90%), guarantees secure national borders (90%) and establishes a path toward citizenship for those who are here illegally, are interested and meet certain qualifications (78%).

Support for each of these principles has increased among self-identified evangelicals since a 2015 Lifeway Research study, except for guaranteeing a secure border, which remained statistically unchanged. Comparing those who strongly or somewhat support specific approaches to immigration reform in 2022 and those who responded yes to questions of support in 2015, the largest increase in support occurred on the issues of protecting the unity of the immediate family (up 20 percentage points, 72% to 92%) and establishing a path toward citizenship (up 16 points, 61% to 77%).

“There are many aspects to the laws and the administration of immigration processes in the U.S. that have potential for reform, but there is widespread agreement among evangelicals about the importance of specific priorities,” said McConnell. “More than three-fourths of evangelicals support comprehensive reforms that seek to improve multiple priorities in one set of legislation.”

Nearly 4 in 5 evangelicals (78%) would support changes to immigration laws that both increase border security and establish a process to earn legal status and apply for citizenship for those currently in the U.S. unlawfully.

Four in 5 (80%) would back bipartisan immigration reform that strengthens border security, establishes a pathway to citizenship for undocumented immigrants who came to the U.S. as children, and provides a reliable number of screened, legal farmworkers. Additionally, 2 in 3 evangelicals (65%) say they’d be more likely to vote for candidates who supported such immigration reforms.

“We’ve increasingly seen evangelical Christians eager to advocate with their elected officials for more compassionate public policies toward these distinct categories of immigrants, which is consistent with many of the policy views identified in this new study,” said Soerens.

When asked the best way for Congress to address immigrants who are in the country illegally, 46% of evangelicals back requiring them to pay a fine as restitution and then allow them to apply for permanent legal status if they pass a background check and meet other requirements. Fewer would want them deported to their country of origin (25%) or granted amnesty and provided permanent legal status (17%). Another 12% say they aren’t sure, and 1% wants Congress to do nothing to address immigrants here illegally.

“More than twice as many evangelicals prefer establishing a process for immigrants who came to the country illegally to obtain legal status than deporting these people,” said McConnell. “While differences exist in how this should be resolved, there is clear agreement that continuing to do nothing is not the best option.”

Evangelicals say their views of immigration come from a wide variety of sources, but they’d still appreciate more insight on the issue from sermons.

When asked what has influenced their thinking on immigration the most, evangelicals are most likely to say the media (23%), the Bible (20%), friends and family (16%), immigrants they have observed (11%) and immigrants they have interacted with (10%). Fewer point to positions of elected officials (6%), their local church (3%), national Christian leaders (1%) and teachers or professors (less than 1%). Another 6% aren’t sure, and 4% didn’t choose any of the options.

When asked their top three influences, friends and family climb to the top, with 51% saying those loved ones are one of the primary factors shaping their view of immigration. Slightly fewer point to the media (46%). Around 1 in 3 say one of their top influences is the Bible (36%), immigrants they have observed (33%), positions of elected officials (32%) and immigrants they have interacted with (30%). Fewer say their local church (19%), national Christian leaders (11%) or teachers or professors (7%) were among their top three influences.

“More self-identified evangelicals say their thinking on immigration is most influenced by the Bible or the media than in 2015, and fewer say they are most influenced by immigrants with whom they have interacted,” said McConnell. “While more evangelicals point to understanding and accepting the Bible’s influence on the topic of immigration, the majority do not yet appear to have made it primary.”

While most evangelicals (63%) say they are very familiar with what the Bible teaches about how immigrants should be treated, 76% say they would value hearing a sermon that teaches biblical principles and examples that can be applied to immigration in the U.S.

Some evangelicals have been actively involved in ministering to immigrants through their local churches. Three in 10 (30%) say they have heard immigration discussions at their church that encouraged outreach to immigrants in their community. Slightly more (34%) say their church has a ministry or outreach that serves refugees or other immigrants. More than 1 in 3 say they are either currently involved in a ministry that serves refugees or other immigrants (15%) or have been in the past (21%).

After seeing the results of the 2015 Lifeway Research study, Soerens said he and other leaders worked to develop additional resources focused on a biblical perspective on immigration. He believes that work is evident in the 2022 study. “While there’s clearly still a need for more discipleship,” he said, “we are encouraged by the increase in the share of self-identifying evangelicals who have heard a biblical message on the theme of immigration and who now say they are familiar with what the Bible says on this topic.”

The sample provides 95% confidence that the sampling error does not exceed plus or minus 3.1%. This margin of error accounts for the effect of weighting. Margins of error are higher in sub-groups. Comparisons are made to an online survey by Lifeway Research of 1,000 self-identified evangelicals Feb. 17-27, 2015.

Self-identified evangelicals are those who consider themselves an evangelical, born-again or a fundamentalist Christian. Evangelical beliefs are defined using the NAE Lifeway Research Evangelical Beliefs Research Definition based on respondent beliefs. Respondents are asked their level of agreement with four separate statements using a four-point, forced choice scale (strongly agree, somewhat agree, somewhat disagree, strongly disagree). Those who strongly agree with all four statements are categorized as having evangelical beliefs: 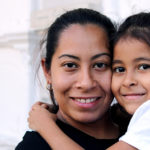 What Does the Bible Say About Refugees?