Nothing matters more in the life of your church than making disciples—not just members of the crowd. Invite your congregation to Jesus.

When Jesus went up to a mountain to deliver his longest recorded sermon, the Sermon on the Mount, the audience consisted of two distinct groups of people: the crowd and the disciples.

Matthew 5:1-2 says, “Seeing the crowds, he went up on the mountain, and when he sat down, his disciples came to him. And he opened his mouth and taught them…” (CSB). There is a large crowd of people and a small group of disciples. And although the large crowd is present and listening, Jesus seems to be speaking to the smaller crowd. He was preaching to His disciples.

The “crowd” was a group of people who liked Jesus. They were fascinated with Him, intrigued by His words and actions. Wherever Jesus went, there they were. The crowd was aware of His healing powers and miraculous works, and they wanted to get in on that. They were caught up in the excitement and didn’t want to miss anything. Matthew calls them “the crowd” because there were a lot of them. There always are.

And then, there are the disciples. This is a smaller group of people who don’t just like being around Jesus but have decided to trust and follow Jesus. So, when Jesus sits down on a mountain to teach about the way to live life in the kingdom of God, He is speaking to those who are a part of the kingdom – His disciples. The crowd is listening, but the sermon is not for them. Instruction on living as a follower of Jesus doesn’t matter too much for those who are not following Jesus.

The crowd isn’t the goal

The crowd never impressed Jesus. The crowd didn’t make Him feel better about His ministry. He was never interested in building a crowd. He didn’t see any real value in a large crowd of fascinated people. Jesus wanted disciples. He wanted people to trust and follow Him, not just be around Him.

See also  6 Essentials to Onboard and Train New Volunteers

This is a great invitation. It not only calls the crowd to respond, but it also tells them how to respond and the consequences of not responding. Responding to Jesus means not only hearing Him but also trusting and following Him. It’s believing that He’s the only one who can save you from your sins, the only one who has life, and the only way to God. And then, in response to that belief, it’s choosing to walk in obedience to His commands. Trust and follow.

And the consequences of this decision are dramatic. Those who hear Christ’s words but refuse to trust and follow Him will ultimately see their lives crumble like a home without a solid foundation. But those who do trust and follow Jesus will be like a house built on a rock. When the wind blows and the storm comes, the house will not fall.

An invitation to step out of the crowd

Over the past twenty years of pastoral ministry, I’ve discovered there are a lot of people in the crowd. And although it’s often hard for me to discern between them and the disciples, Jesus knows the difference. And Jesus knows the dangers.

The storms are going to come in every person’s life. The winds are going to blow. Life will be filled with innumerable challenges and struggles. And the storms will ultimately expose you (Matthew 13:1-8). The crowd will crumble. The disciples will stand.

Nothing matters more in the life of your church than making disciples—not just members of the crowd. It takes courage to step out of the larger crowd and into the smaller group of disciples. This is the starting place of a godly life—the foundation. And now is the time. Don’t settle for inviting your congregation to be around Jesus. Invite them to trust and follow Him with their whole hearts.

Josh is the senior pastor of Prince Avenue Baptist Church. He and his wife, Andrea, have four daughters and one son. He is the author of Preaching for a Verdict and co-author of the Psalm 1-50 volume in the Christ-Centered Exposition Series. 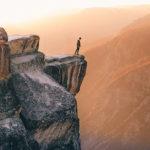 Trusting God in the Mountains and Valleys of Ministry