First comes love, then comes marriage, then comes … therapy? Too many couples jump into marriage with little or no preparation. This can lead to big problems and hours of counseling. But Drs. Les and Leslie Parrott, New York Times best-selling authors of Saving Your Marriage Before It Starts, say premarital counseling can go a long way toward saving a marriage before it starts.

They’ve recently created the Saving Your Marriage Before It Starts (SYMBIS) Assessment to help churches do premarital counseling. We talked with Les about the importance of premarital ministry and how their new tool can help churches improve this important first step in a couple’s life together.

There’s been a lot of talk about millennials delaying marriage. Does this new generation still believe in marriage?

Here’s what we know for sure: a majority of young adults plan to marry eventually, and most expect to be married for life. Did you catch that? Almost all young adults between the ages of 18 and 30 not only aspire to be married, they plan on it.

And, perhaps more striking—in the face of a staggering divorce rate that most young adults have witnessed up close and personal—most still believe when they marry, it will be for life.

But are they motivated to prepare for marriage through education or counseling?

But do we know for sure if premarital counseling works? And what does that mean for churches?

Absolutely. Research shows that couples who succeed gain the knowledge they need before they settle into destructive patterns that often lead to divorce. In fact, couples are 31 percent less likely to get divorced if they have some pre-marriage training. Not only that, couples who participate in pre-marriage programs experience a 30 percent increase in marital success and fulfillment over those who don’t participate.

I think most Christian leaders realize the benefits of providing pre-marriage education for engaged couples in their churches, but they aren’t always sure how best to do it. There are some great resources available to churches that want to provide in-depth pre-marriage counseling.

Which brings us to your book, Saving Your Marriage Before It Starts. It’s been used by more than a million couples, and a number of churches use it as a basis for premarital classes.

Yes. And we recently updated and revised the book, along with his-and-her workbooks and a DVD. We want to make it as easy as possible for any size church to have a first-class pre-marriage ministry.

Over the past two years we’ve conducted listening sessions with more than 200 churches, asking two questions: 1) what do you do for engaged couples; and 2) what can help you do it better? Those listening sessions led us to develop a new pre-marriage assessment called the SYMBIS Assessment.

I’ve never been more excited about a project than I am this assessment. It’s truly a game-changer that’s making a positive difference. It ensures the church is giving couples every advantage possible as they prepare for marriage. The assessment generates a robust, relevant, and personal 15-page couple’s report that the pastor or mentor unpacks with the couple. It makes pre-marriage counseling easier and more effective than ever.

A number of studies show that certain pre-marriage variables can differentiate couples who will do well and those who will struggle with up to a 94 percent accuracy rate. We’ve built the assessment on a mountain of research and a deep foundation of biblical understanding.

How does it work? How do church leaders get started?

It begins with a three-hour online certification training for pre-marriage counselors at our website SYMBISassessment.com. Once they complete the course at their own pace, they can begin using the resource immediately. They’ll also have their own dashboard for managing all the couples in their care. It’s easy and intuitive. We received the nicest compliment from a pastor recently who said, “If Steve Jobs designed a pre-marriage assessment it would look and feel like this.”

So is the SYMBIS Assessment only for one-on-one premarital counseling?

No. Leaders can use it in large classes, small groups, or in counseling sessions. And they determine the number of sessions they want to have. Church leaders can even invite “marriage mentors” from their congregation to become trained as certified SYMBIS facilitators. That alleviates the pastor’s load and empowers laypeople in ministry.

You’re very passionate about helping the local church do pre-marriage ministry well. Why is that?

The first sentence in our book, Saving Your Marriage Before It Starts, says: “We never had pre-marriage counseling, but we spent the first year of our marriage in therapy.” And it’s the truth. Our passion comes from the heart. It’s a mission for us and we want to revolutionize the way the church helps couples launch lifelong love. 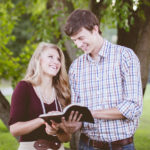